When Lucy fell from the sky 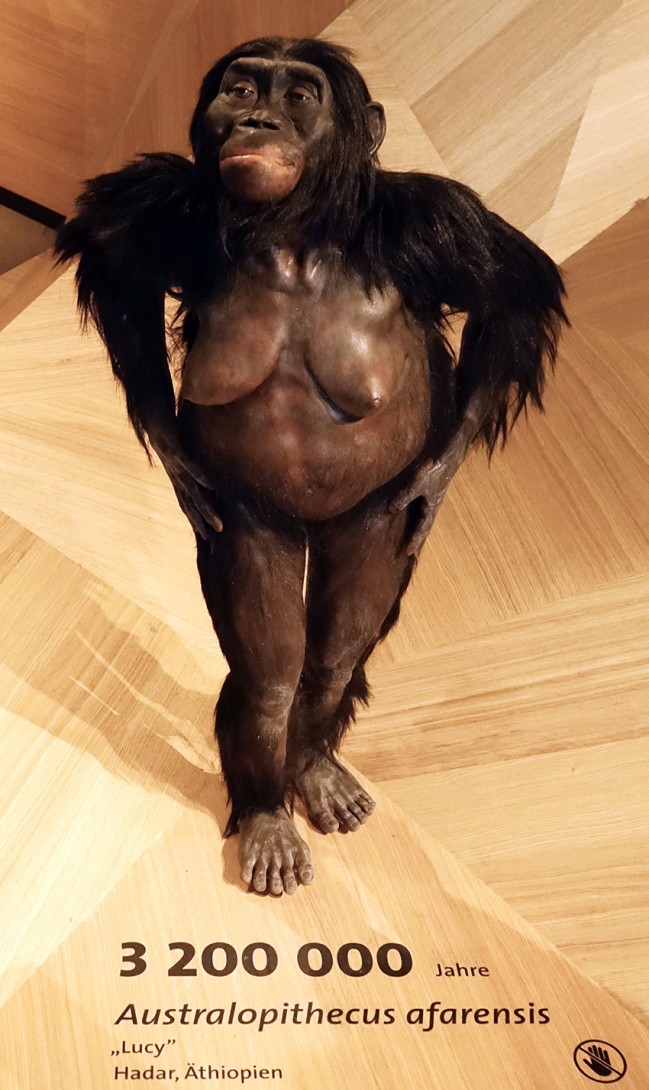 (Exhibit in the Neanderthal Museum)

Evolutionary science has its hand on the undoubtedly handsome figures and artifacts in the Neanderthal Museum: Thus one stumbles beside own interesting evolution dolls in 3D also over Lucy, the small celebrity from Ethiopia, which is supposed to have fallen "a little" over 3 million years ago in the region of Hadar from a tree and which is assigned to the hominid species Australopithecus afarensis. So far nothing extraordinary, if you don't think about it very much. The replica in the museum shows a being just over a metre tall, the result of a work by Dutch sculptors Adrie and Alfons Kennis.
The two twins Kennis & Kennis write on their reconstruction website "... We never read; we only looked at the pictures in the books. Human evolution was what interested us. We made clay models of drawings or we copied drawings of fossils and skulls. We still do." (end quote). OK, that sounds inspiring, but not really scientific, certainly not paleoanthropological.

On the website >> planet-schule (SWR/WDR) lHere we learn that the above-mentioned "expertise" of the two artists is already sufficient to be considered "primeval specialists".

Here is the reference to the Neanderthal figure, which they made there among all the others. Further quotes: "Alfons and Adrie Kennis do not believe that the Neanderthal man bent over and walked through the forest with a club in his hand - but that he walked upright.
Or: "The Neanderthals were on their feet all day hunting animals, for example wild horses. They had to be strong for that. But what their muscles looked like is something the scientists do not agree on. For Mr. Mettmann, the Kennis twins opt for an interim solution: "He should appear strong, but not too muscular."

Now let's take a look at what the two talented artists and reproducers had probably done. Uups... Actually we don't know exactly, but we know what was found in Ethiopia at that time (actually 1973). American and French scientists found bone fragments that can be seen elsewhere. In the Neanderthal Museum we find only the "result" of an interpretation by freelance artists.

OK, so we have here a few bones of a fossil partial skeleton, a non-existent skull, from which the following composition was conjectured by subsequent "findings" via computer tomography, DNA tests and puzzle fantasies. Here is a replica of Lucy's skeleton in Frankfurt's Senckenberg Natural History Museum 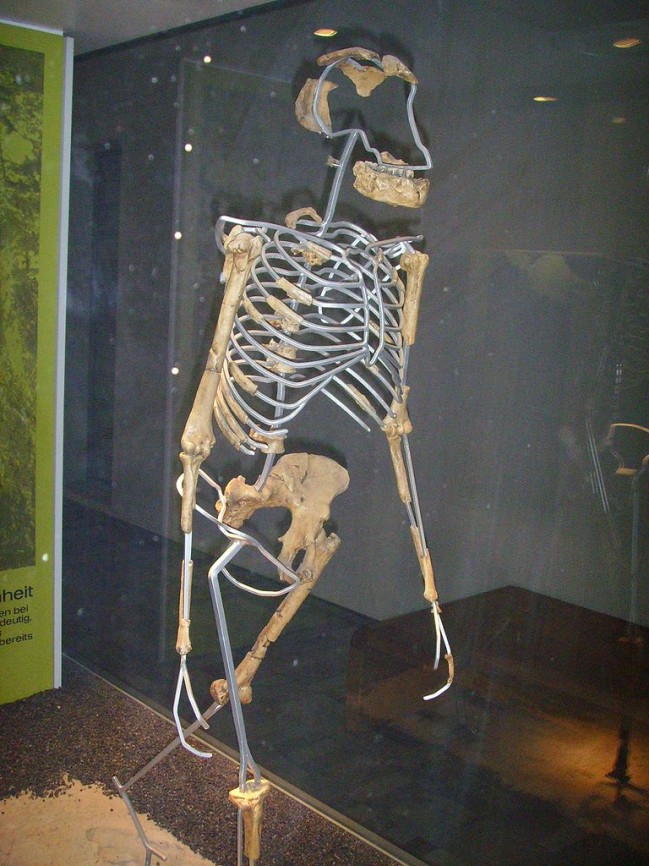 So at the end of the story of its creation stands our figure in the Neanderthal Museum. I think, because of these few fragments, a lot of imagination is needed to get such a result as we get presented there. I would rather not say more at this point... But what does fantasy have to do with hard facts?

Findings and determinations "out of the blue"

The name Lucy derives from an alleged mood of the discoverers who, according to their own statements, once too often heard "Lucy in the Sky with Diamonds" from the Beatles on their tape. Fits somehow into the early 70s, one wants to assume at first. The authors Johansen, D. and B. Edgar ([1] Johanson, D., and B. Edgar. 2000. Lucy and her children. Spektrum akad. publishing house ISBN: 3-8274-1049-5) set a popularistic benchmark: "Lucy has become the epitome of our earliest ancestors worldwide. Like a magnet, it attracts people who don't know anything about human evolution and everyone has somehow heard of Lucy." We should therefore learn that 47 bone fragments are sufficient to imagine a chimpanzee-like female with a hominid reference and to feel further confirmed in the given theory of evolution.
Sounds like little space for our own fantasies when given artists already show us the way into the 3D world.

Knowledge creates freedom. But when does the imagination start? Lucy shows us that great plasticity is applied here on thin facts: For people who like to accept prefabricated things, which is often also convenient - without questioning the things themselves.

For a long time it was even speculated that Lucy must have literally fallen from the sky simply because she is said to have died from a fall from a tree.

Perhaps anyone interested in symbolism is interested in what it has to do with the derived Beatles song and its designation/origin.
Hard-boiled Beatle fans know the story of John's son Julian, who comes home from kindergarten with some works of art and thus inspires his father to write Lucy's lyrics. John confirmed the story in an interview with Playboy, which was published shortly after his death:
PLAYBOY: "Where does Lucy in the Sky' come from?"
LENNON: "My son Julian came one day with a picture he painted of a school friend named Lucy. He had drawn some stars in the sky and simply called it "Lucy in the Sky with Diamonds". 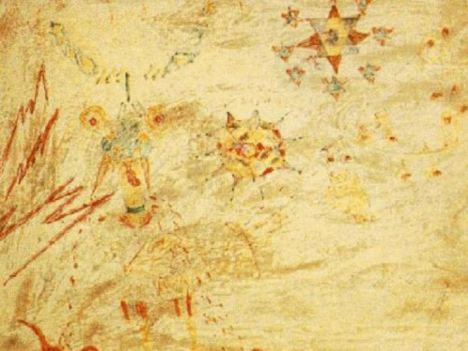 "The other pictures in the song weren't inspired by drugs?" (Note: For a long time L.S.D. was seen here as hidden symbolism behind the title).
"The pictures are from Alice in Wonderland." Alice was in the boat. She buys an egg and it becomes Humpty Dumpty. The woman in the shop turns into a sheep and the next minute they row somewhere in a rowboat and I imagined it. There was also the picture of the woman who would come to my rescue one day..... a "girl with kaleidoscopic eyes" who would come out of heaven. It turned out that it was Yoko, although I hadn't met Yoko yet. So maybe it should be "Yoko in the Sky with diamonds".

My personal note: Perhaps science found Lucy from Ethiopia just in time to save the theory of evolution.... In my opinion, small creatures do not necessarily have to look like monkeys, even or especially when they are assigned to hominids. According to age dating (if it is true) we might also be told by optical means that we are dealing here at best with an "ape-like" species without great abilities. I don't believe a Dutch artist more than my own imagination.