Monolith in a suspended state: Ishi-no-hoden 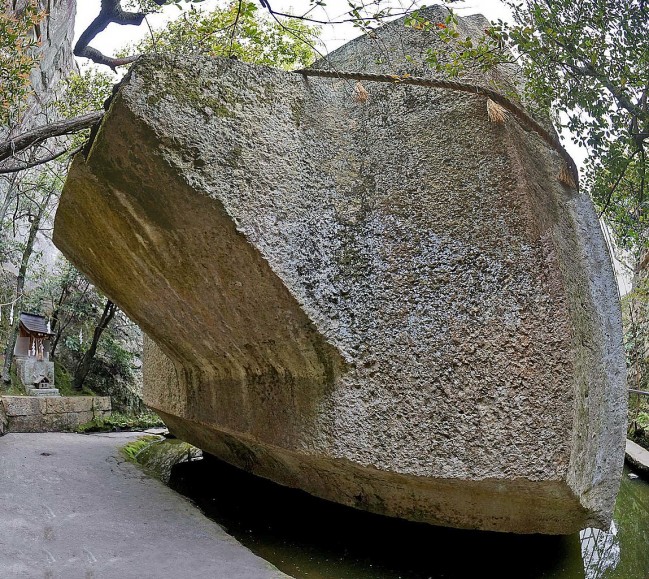 About 100 kilometres from Asuka Historical Park, near the city of Takasago (Japan), there is an object on a sloping terrain in a rocky bay. It is a 5.7 x 6.4 x 7.2 m large megalith, which is estimated at about 500-600 tons. It is assumed that the megalith, called Ishi no testicles, is a semi-finished product because it was probably produced and left behind.

Ishi no Hoden a Mystery Object 1

On one of the two vertical sides a leg stands out as if cut out, which suggests that the object is not in an original position but on the side. In the immediate vicinity of the megalith is the Shinto Temple.
It is no coincidence that the temple was built there, since the megalith is regarded as sacred and people have worshipped it since ancient times. The official version says - how could it be otherwise - that the rock was intended as a grave. Of course, there is no evidence whatsoever.
Below the monolith there is a large stone reservoir in the form of a tray filled with water. According to the temple's records, this water reservoir never dries out, even during long periods of drought. Because of the water, the base of the megalith that connects it to the ground cannot be seen, and it looks as if the megalith is floating in the air. That is why Ishi no testicles are also called "the lifting stone".

The town council of Takasago and the history laboratory of the University of Otemae conducted studies on the megalith in 2005-2006.
At first glance, the surface of the megalith seems to be handmade, but there are no traces of pickaxes or other instruments. Such traces can only be found under the megalith, where it is attached to a larger boulder. Geologists also think of erosion in the absence of such traces, but Ishi no testicles were covered with debris (from the top of the mountain) - most likely as a result of an earthquake. Over time, the space around the megalith was cleared. According to the available sources, the material of Ishi no testicles is not granite, but hyaloclastite (a pyroclastic, glassy rock), which according to scientific interpretation was formed about 70 million years ago by volcanic eruptions in the water. Something like this leads me to speculate on a "melting process" with high technologies. 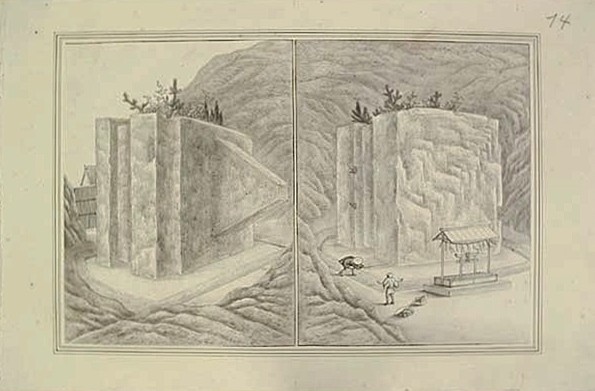 The German physician Philipp Franz von Siebold (1796-1866), who entered isolated Japan disguised as a Dutchman, later presented his drawing of Ishi-no-Hōden in volume 1 of his books "NIPPON" (1832). 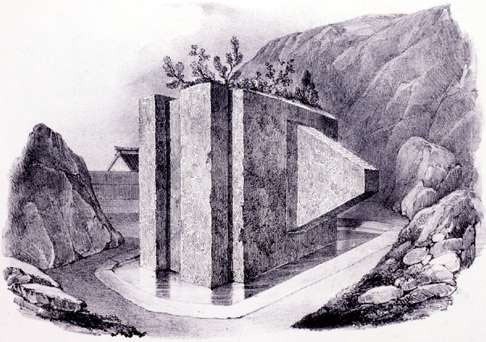 As is so often the case, there are no traces of machining in the rock around the megalith - neither of machines nor of tools. The whole rock is literally unmarked. The lack of tracks of pickaxes and chisels on the rock around Ishi no testicles can only mean one thing - simple working tools were not used when cutting the rock. So how did they make it?

Meanwhile, researchers are still searching for cavities in it to keep up the theory of digging. According to the locals, however, sarcophagi were made from monoliths and only for their lids. Ishi no testicles has nothing in common with a sarcophagus anyway - it is much too big.
Historians have no other theories in stock. And that, although one may safely assume that Ishi no testicles was built by a technologically developed civilization. Just because of the enormous size alone, one inevitably has to come up with something like this.