Keyholes from above: They appear worldwide 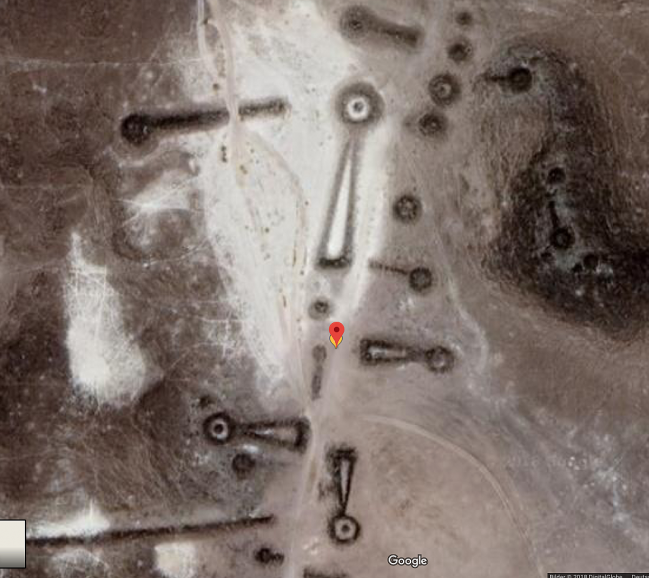 Only 20-30 km south of the officially designated nature reserve Mahazat As-Sayd and the Umm Al Ramth Wildlife Sanctuary it starts: On a 20 km long - almost dead straight - axis from north to south one finds an accumulation of strange geographical formations that repeat themselves... Sometimes they are keyhole-like, sometimes they look like sperm. They are increasingly located in depressions or at lower levels and their symmetry does not fit at all into the arbitrarily formed desert landscape.

Below the north-south axis of these keyhole formations or chain links with pendants. Of course you can also find similar formations to the west and east, but this seems to be the approximate direction of the events here. Geographically or geomorphologically I cannot explain such a thing. The long straight track to a crater-like hole does not look like a natural structure. What can you find there? 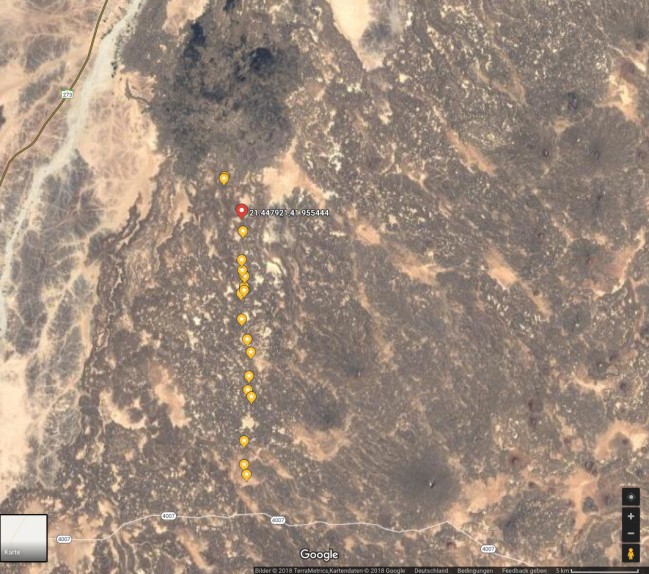 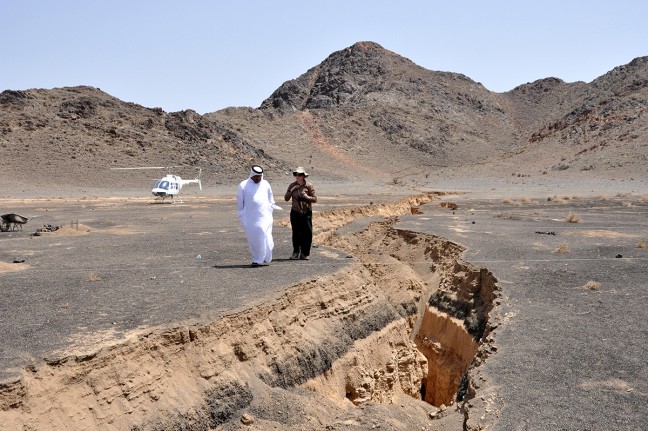 What's the situation down there? This formation for example is more of seismic origin and has nothing to do with the perspectives from above. (Image License CC0 Public Domain; Author: John Pallister, USAID). The actual formations, which can be seen on the aerial photos, are low stone walls.

If you take a closer look, you discover that the straight lines are broken. Whether they were caused by mechanical, possibly military interventions or tests with electromagnetic waves? Are the dotted straight lines or circles signs of set stone formations as found in Africa? They could also be traces of old civilizations that had settled there in "more fertile" times (protected settlement rings). In these desert-like volcanic regions of Saudi Arabia they seem to be scattered all over the crater rims.

The figures or keyholes at Al-Hayit

Similar keyholes or chain links with pendants can also be found in the Arab region Al Hayit. One meets there such structures in very concentrated form. It is obvious that these are no longer natural or topographical coincidences. These shapes are absolutely geometric. Apparently, people there have dealt with the phenomena. Since the small village of Al Hayit, for example, is only a few hundred metres from these structures, it could not be that nobody had stumbled across them.

One can distinguish here between the figures and the "pendants with chains". A little further east of this first accumulation of comparatively large figures, there is apparently an older drop-out track on which dots with extensions as well as circles with triangles are arranged along the sides. If you switch from the satellite view to Google Maps, there is neither the big nor the smaller track south of the turn-off, which you can only see from a bird's eye view.

Since these structures continue to the north as well as to the south and off the beaten track, one gets the idea that instead of depressions they could be artificially created rock structures.
And indeed, there are supposed to be two types of burial structures there. One is the so-called "hanging graves" - round burial chambers at the end of a row of small piles of stones (this would explain the pendant structure with the broken chain - recognizable from the air). These have appeared in both the Harrat Khaybar and Al-Hayit areas. In some cases they have a second enclosure at the other end ("so-called double hanging graves", they look like dumbbells). They often appear in large groups and seem to form whole cemeteries or parts of them. There seem to be hundreds, maybe even thousands of them.
In contrast to the rock formations, which look like pendants or dumbbells, the "keyhole" graves usually consist of a round border at the head of stone walls, which form an isosceles triangle. There are numerous variations in the respective sizes and connections: In some places the two (triangles and heads) are completely separated from each other, and in others the triangle is so wide that it resembles some hanging graves. Several trackers (including the so-called Desert team around Abdullah Al-Saeed) have already taken pictures on the ground, which undoubtedly prove that the walls are made of dry masonry. These are often one meter high, sometimes a little higher.

In Jordan there also seem to be such grave structures with "followers" patterns, which are estimated to be 9000 years old and look exactly like in Saudi Arabia. Did they find bones everywhere? In my opinion, this evidence for graves is still pending...

These keyhole or trailer graves must have been built at a time when the number of inhabitants was significantly higher or and when the area was much more densely populated. If it was a matter of graves at all... After all, Late Neolithic and Early Bronze Age buildings are to be guessed.

Mound Daisen-kofun in Sakai, Osaka, Japan is also under "suspicion of a grave". It is said to be one of the largest graves in the world. The Japanese government points out that this is the tomb of Emperor Nintoku, the 16th emperor. However, many historians do not believe that. The alleged burial chamber is closed to the public.
The keyhole-shaped earth wall is 486 m long and 305 m wide. Its diameter is 245 m. 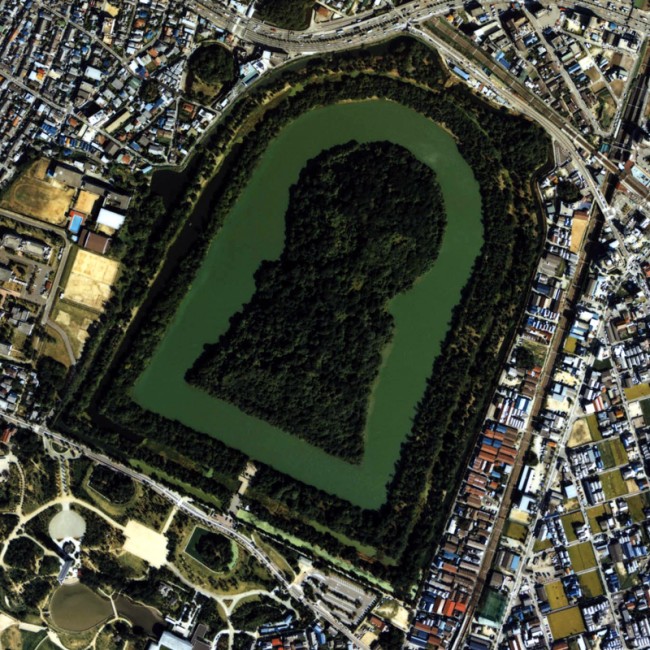 There are other keyhole "graves" around the area, which have different orientations. 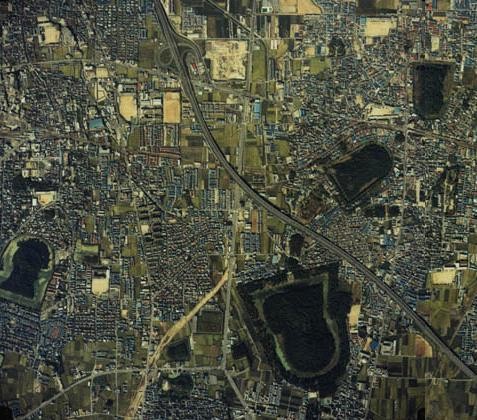 We should not forget the wedge-shaped, keyhole-like formations that were discovered on Mars, as the current issue of the Journal of Space Exploration (Volume 4, Issue 3, November 2016) would like to illustrate.
The document "A Wedge and Dome Formation Set within the Flat Plains of Libya Montes" shows the results of a three-year analysis of NASA images identifying a continuous triangular and circular structure on the surface of Mars. Those who believe in the authenticity of NASA images in general will also be provided with similar patterns here.

Hundreds of keyhole structures in the Sahara (Algeria)

Around the area of the Tassili National Park (a mountain range in the Sahara in southeast Algeria) there are hundreds of similar structures, which can become several hundred meters long in individual cases (royal graves or graves of giants?). In their keyhole form they differ slightly from the Arabic variant, since they are consistently bordered by a circle and do not show the usual symmetry even at the side flanks. Possibly the objectives for the construction were similar to those in the similarly remote desert or lava landscape of Saudi Arabia. In Algeria they are called "Monuments en trou de serrure" as well as "Keyhole monuments" and are also mentioned at a similar age of 7,000 years. Here, too, the rock structures are associated with graves.

Was this lower grave with a length of about 180-200 meters - if one should even assign it to the category graves - really only assigned to one single person? This is supposedly the largest "keyhole" in the Algerian region.

Back to Saudi Arabia: Even more unusual keyholes or kites?

The first Jordanian aerial photographs date from the 1920s, when the British Royal Air Force opened an airmail route from Egypt to India. The route led over the northern Harrat Harrah, where pilots were impressed by the number and variety of archaeological remains in this rugged, sparsely populated landscape. The Bedouins told them that the structures and walls they saw there were "the work of the Old Men".

About 200 km north of Medina there are impressive works of "Old Men". From the air, the so-called "dragons" are practically invisible. These are the remains of long stone walls, the purpose of which is still unknown today. It is assumed that the traps were artificially created for the hunters.
However, the kites are huge: The wall body is 100 meters wide, sometimes even wider. The "dragon tails" consist of two or more walls that run in opposite directions from the "dragon head" and can be up to two or three kilometers long. On the ground, however, the kites are hardly recognizable, since the walls erected from basalt are only about one meter wide and their remaining height today is hardly more than half a meter. In a landscape that is already densely covered with the same rocks, such symmetries disappear completely from close up.

So what are we dealing with? With a catching device for animals or a monstrous fence for animal husbandry? We know that there are hundreds of them in Saudi Arabia alone. Further numerous structures can be found in Yemen, Central Asia, Armenia and even in southern Turkey. I will present new bizarre structures here every now and then. The category of desert kites is basically also a separate topic.