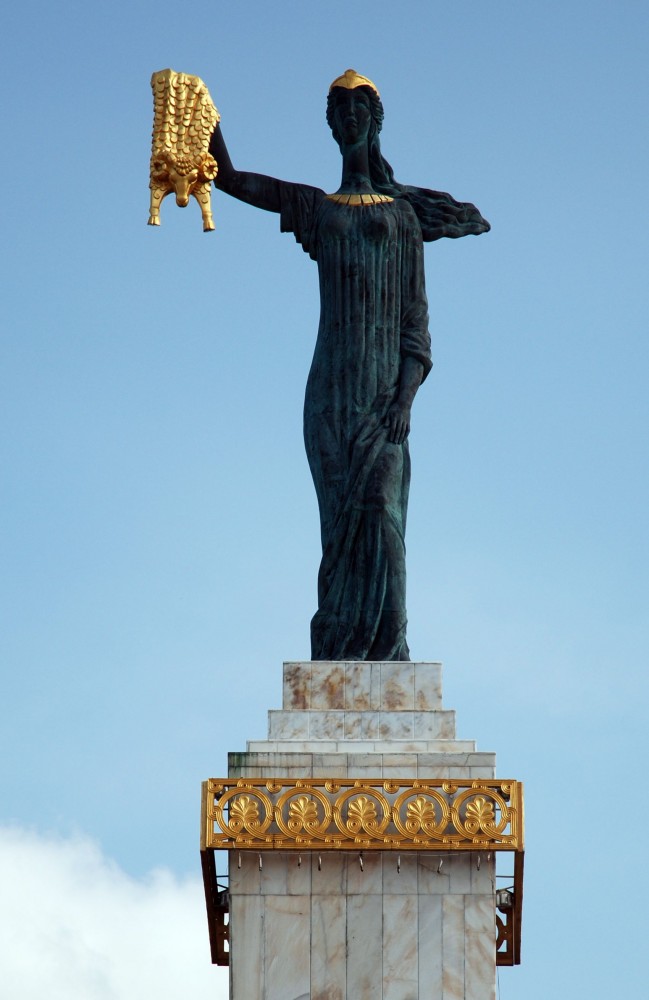 I must admit that so far I knew little or nothing about this connection: the Golden Fleece. It is an order that goes back to the beginnings of the 15th century as an award and honoured the "merits of knights" in an unspecific way.

The core symbol of the award is a golden, albeit dead, ram, which has established itself as a brand and since then has adorned numerous necklaces, orders and coats of arms. Personally, I find it highly questionable to present the animal skin of a dead creature shining like gold as a portrait of a community of any kind, just because of its visual significance.

The fact that this symbolism also prevails on public statues may also be thought-provoking. The Aries has a specific victim role here - as with all other artefacts mentioned above. For example, above by the emphatically black Medea statue in Batumi, Georgia - on the Europaplatz in the centre of the old town.

Something similar can also be found in Russian Sochi, very close to Georgia. Here, too, the victim status of the Aries is obvious. 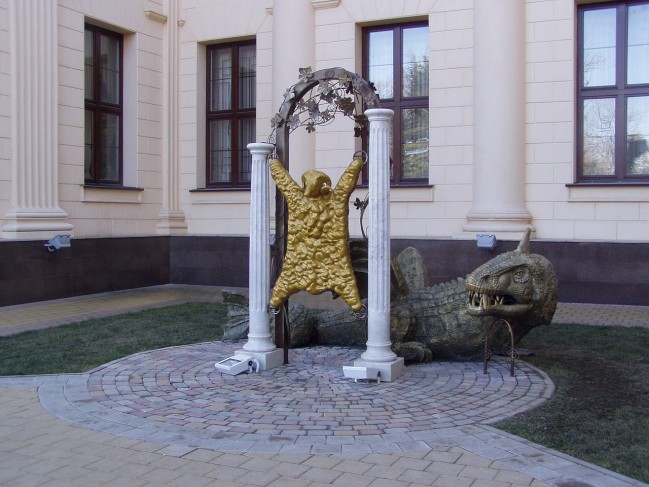 What's the moral of the story?

The origins of this symbolism obviously go back to different mythologies that I will come across later.
If you are interested: In addition to the well-known English "Order of the Garter", the "Order of the Golden Fleece" has been making the rounds since 1430. The occasion was the marriage between Duke Philip the Good and Princess Isabella of Portugal in Bruges. "Dynastic Order of Knights" means that it was subsequently handed down over generations and lines of nobility.
The "good" Duke Philip dedicated the order to the protection of the holy church and also to the immaculate honour of knighthood. The crusade to the Orient was already planned by him, which leads to the indication that he felt inspired by the so-called Argonauts' procession.

The Argonaut saga as a thematic complex of the Greek mythology of Euripides deals with the search for the Golden Fleece and its robbery. A story that was already known under Homer:
The Golden Fleece, or rather the fur of the Aries Chysomallos, was the focus of an expedition under Jason. "Arriving in Colchis, he demanded the Golden Fleece from Aietes, the king. The king promised him the fleece if he managed to tighten the fire-spitting bulls with his iron feet and sow dragon teeth. Medea, Aietes' daughter, fell in love with Jason and helped him accomplish the task." (Quote Wikipedia). At the end Medea (for Jason) put to sleep the guardian dragon and fished for the Golden Fleece. 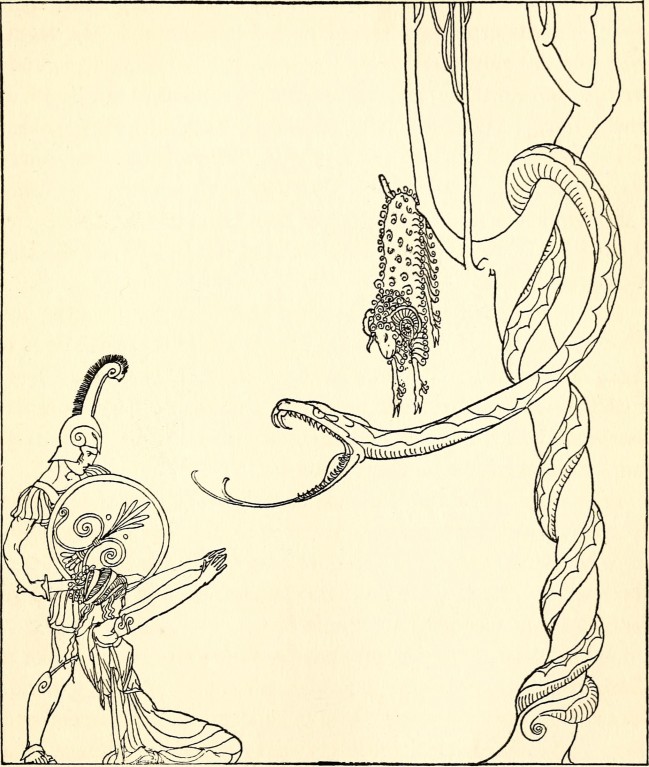 (Excerpt from mythology: "... We, he stood there and looked at it, knowing that he was finally looking at the golden fleece. His hand let Medea's hand slip and he went to grab the fleece. As he did, he heard a terrible hiss. And then he saw the Guardian of the Golden Fleece. Winding around the tree, with his neck outstretched and his eyes sharp and sleepless, was a deadly horror. His hissing ran through the entire grove and the birds that woke up screamed with terror. Like rings of smoke rising above each other, the neck of the snake wrapped itself around the tree - twists that were covered with hard and shiny scales. She unwound from the tree, stretched herself and raised her head to attack. Then Medea fell on her knees and began to sing her magic song. As she sang, the body around the tree slackened. Like Adark, the Jason. Medea, with a newly cut juniper spray dipped in an amystical brew, touched her deadly eyes. And she sang...").

Interestingly, we sometimes have to deal with a snake instead of a dragon. Apparently both serve the same purpose. This scene is a reminder of the tree of knowledge that Adam and Eve once used.
But there was still no happy ending, because Jason later took another one as his bride and Medea "thanked" him by assassinating his wife and children. She ended the final chord of the tragedy with suicide.

Medea stops at nothing: she has her brother Absyrtos thrown off board the Argo to stop the persecutors and flee with Jason and the Golden Fleece. This is only one of several variants of their escape, but once again the end "sanctifies" the means in certain circles. In the background on the left the Golden Fleece ... 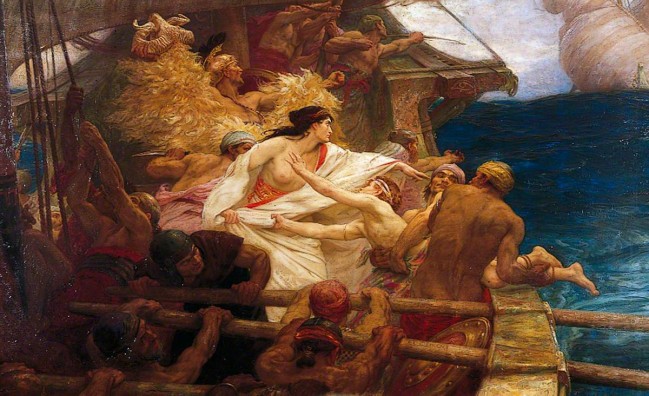 Chysomallos, the golden aries, could speak and fly in his lifetime. He once flew a threatened king's son to Colchis, which later lay in the Goergies. Here it is interesting to mention that sheepskins were used to wash gold from rivers. Later archaeological discoveries in the region confirmed the numerous gold finds. Euripides, with its history of the Argonauts, most probably provides the motive for the greed of the Greeks for the mineral resources of the Black Sea. Already in the 2nd century it was known that the rivers of the Caucasus had immense gold dust. One dipped there thick woolly sheepskins simply into the water, so that these could suck themselves with gold sand.
A beautiful blueprint for the enormous greed of the then emperors and aristocrats, who also felt further west inspired by it. Philip the Good created a brand here that later advanced to become the Habsburg House Order.

Why the figure of the Aries' fur could assert itself so steadfastly as the logo of the order is apparently also justified by the Old Testament. In it, the lamb is regarded as a sacrificial animal - all the better if it is then (at the latest at the end) also covered with gold. Similar to the Ring of the Nibelungs, the Golden Fleece stands for the unsatisfying greed of certain people for power (and possession). The owners of the Golden Fleece should be aware of the present power, but also of the consequences. Medea's downfall sends its greetings. Whether the message has arrived at the end with the nobles and knight brothers in the appropriate form, may be strongly doubted.

Officially the order sign hangs on a blue enamelled flaming flintstone. It is important that the Aries fur, which hangs down like a completely dead body, is worn by a 31-link chain corresponding to the original number of 30 knights and a Grand Master. With the years and centuries the statutes were changed, there are now many more members. 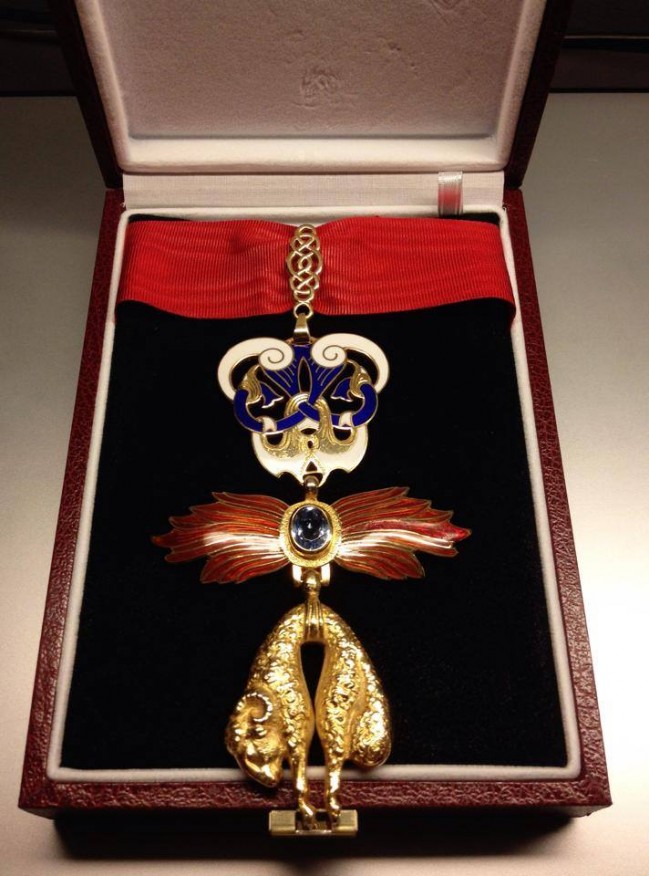 The flintstone could also be interpreted as an "all-seeing" eye (reference to Sun King Ra), the Aries head at the top of the pendant possibly as a reference to the wind and fertility god Amun, an Egyptian deity. While goat and chamois heads are also associated with demonic rituals, the motif of the Aries head is controversial as a symbol. It cannot be ruled out that pagan gods, demonized by the Catholic Church, have established themselves secretly as further worshipable goddesses in more intimate circles. Whether with demonic orientation or without is left to everyone's own imagination. It is interesting to note that the Catholic Church also includes "demonic" cult animals of the once demonized paganism as permanent components in its buildings (>> see the example of Cologne Cathedral). Aries were definitely considered sacrificial animals in ancient mythologies.

Who belongs with title and name to the so-called "Order"-knights of the Golden Fleece, can be looked up in a surely not quite complete overview >> here.

In spite of this honourable alliance one may wonder, for example, why Napoleon went to battle against Alexander I, although both could be decorated with the same order sign.

Fig. right: Alexander the I of Russia - but without the Golden Fleece on the uniform; Vladimir Borovikovsky [Public domain]; >> picture source 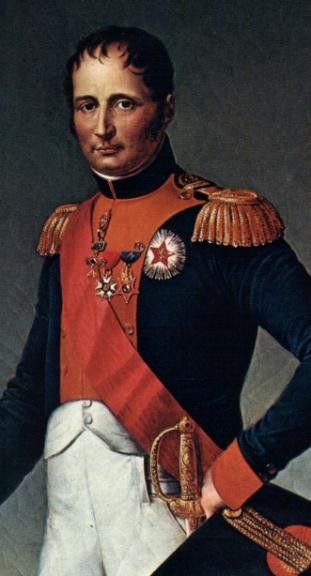 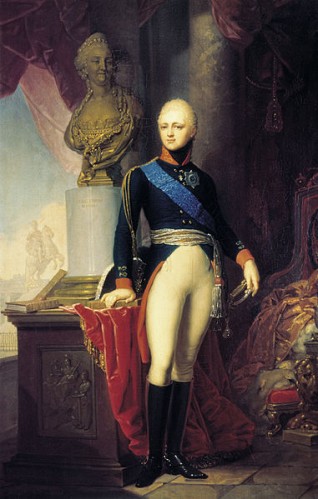 There are countless paintings of dukes, princes and nobles who have immortalized themselves with the Golden Fleece. 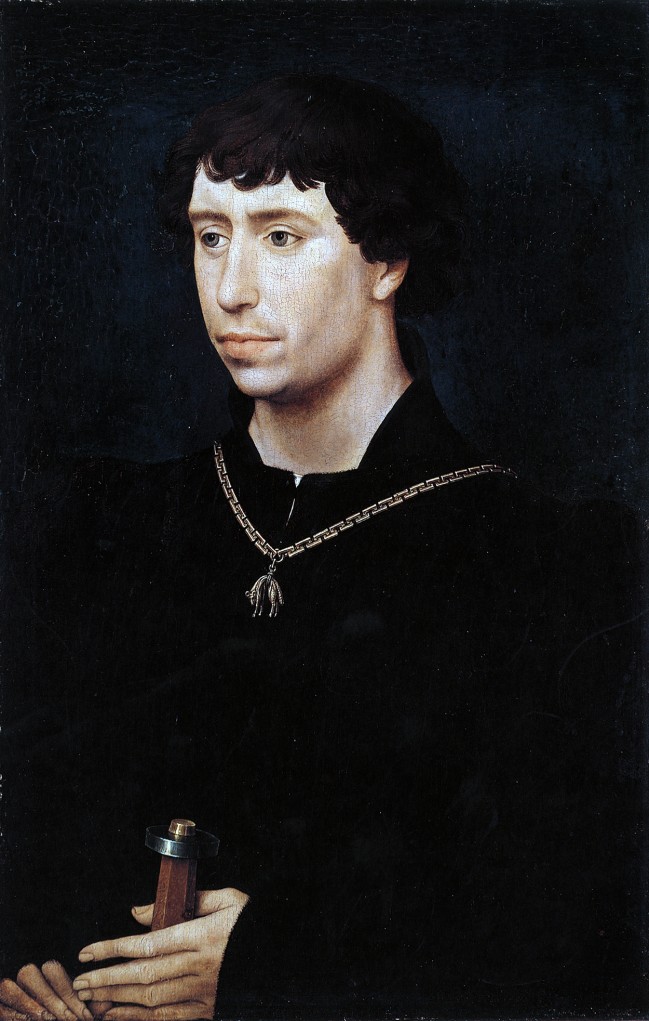 In heraldry there are dozens of examples of the golden fur as an appendage to coats of arms. The chain symbolism is - if one deals with further details - just as complex.

Both in the heraldry of the noble dynasties and in the coats of arms of individual states, the Golden Fleece must not be missing and is therefore not to be seen purely personified. Here is an example. Picture source: Wikimedia Commons; coat of arms Austria-Hungary of 1916; >> picture source 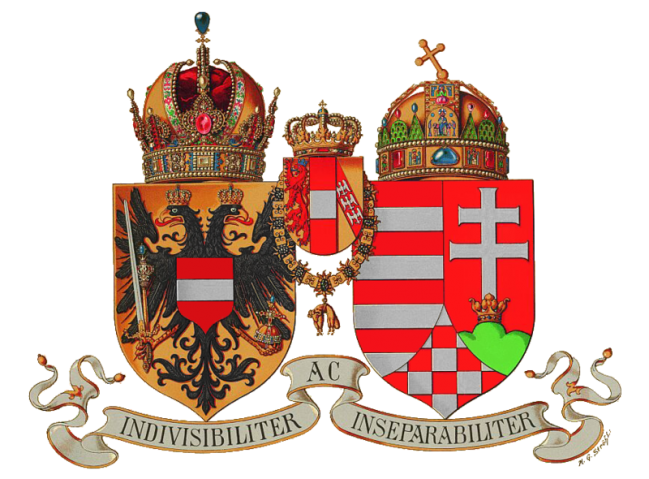 And how does this logo or the Order's covenant reach the clergy? Now, if the nobility and the knighthood receive their absolution for it (which was obviously always the case), the Catholic Church stands not in the way of the covenant: Here the monastery church St. Anna im Lehel in the city district Altstadt-Lehel in Munich (Bavaria/Germany), stucco cartouche with the coat of arms of Charles VII, the Bavarian elector and emperor of the Holy Roman Empire, and the chain of the Order of the Golden Fleece (see detail view 2nd Fig.). 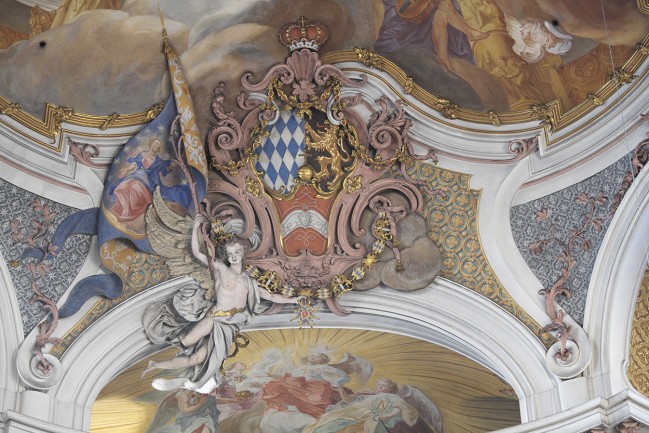 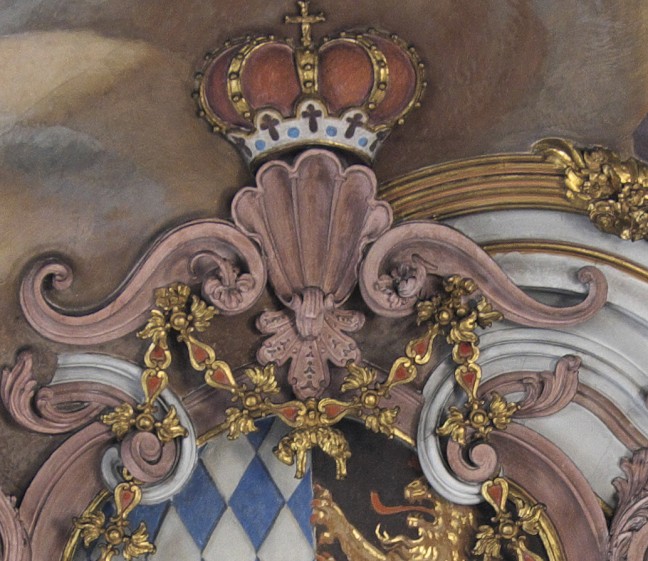