No original image of Esanbe (source: pexels); the closeness to the mainland was much smaller - but it also rose out of the sea at a lower altitude.

When I read that the Japanese coast guard has been searching for a missing island for quite some time, I can't help smiling. But my humor is primarily for the "search", less for the sudden disappearance.

Off the coast of Hokkaido in Japan, they found something that made me wonder. A small coastal town called Sarufutsu was originally only 500 m away from a small island called Esanbe Hanakita Kojima. But this one was suddenly missing.

Since the distance to the coast is not very great, it is all the more surprising that it has only recently been missed. It is precisely the circumstances that make interested observers of such a report prick up their ears ...

Here the second largest Japanese island Hokaido in the north; the small disappeared island Esanbe was located on the east side of the northern tip. 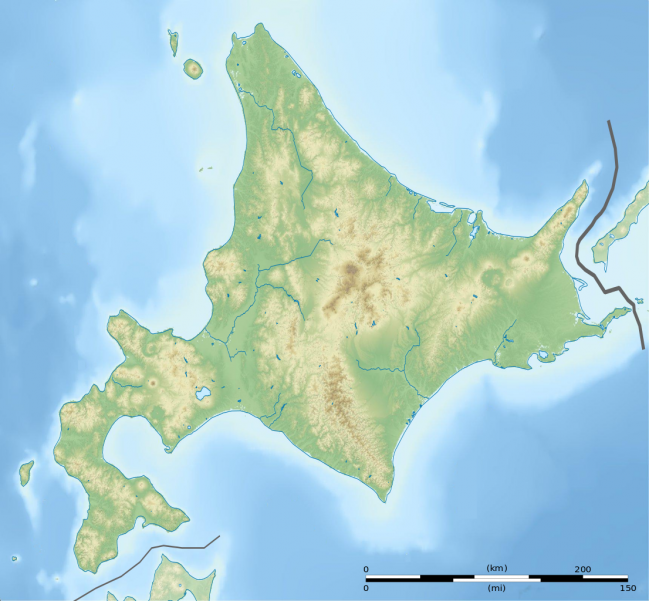 On the satellite image of Google the island was not to be discovered. The coastal courses in the area of the village Sarufutsu look as if they had been intensively processed with Photoshop. Maybe this happened before the missing island came into focus. Zoom in closer and see for yourself if this doesn't seem strange to you on Google Earth.

Out of sight - out of mind?

OK, since its last measurement in 1987, when it is said to have only been included in the official list of islands, it was only about 1.50 m out of the sea (if it's true). But it should have been enough for the population to declare this island missing at some point. But nothing has happened, even fishermen don't seem to have seen the light. Wouldn't that also be a challenge for amateur divers?

A non-resident illustrated book author, who recently wanted to visit the rock island, was the first to realize that it was no longer there. Why him of all people and why so late?

There are about 185 islands around Japan of which one has knowledge and which Japan would defend also bitterly against the neighboring states. After this incident the territories of the Japanese territory shrink by 500 meters, if the island does not reappear unexpectedly (*Ironie off*).

Even the most sleepy fisherman will notice when an island disappears 500 metres from the coast? I cannot imagine that there are no witnesses. (Picture source: Pixabay)

Then where did she go? Any sensible researcher would first look to see if it had simply been washed away. After all, erosion can easily do something like this over the decades. Tectonic movements should also have specific effects if there is evidence of them.

I can only imagine that it would take so long to just take a look. Is there a rudiment of the island under the surface or not? If it were now completely gone, it would of course also explain why we haven't heard a statement yet. That would really be a reason for guesswork.

Why is this taking so long?

While an author of a photo book already states in September 2018 that an island is missing and that no results of the coast guard are known to this day, one can now guess whether it has simply slipped under the surface of the water or been lost completely "with stump and stalk".

Perhaps one is thinking about how one can politically (or at least via the media) under-submit a "theft" to the Russians? The whole thing seems extremely puzzling at any rate - above all, because there had been no previous reference from the population. Or have we simply missed the solution to the riddle in the sense of an official declaration? Personally, I know nothing ...

It also seems strange that nothing has been reported about a tsunami or an earthquake in the region. In contrast to East Island, an approximately 11-hectare island in the Hawaiian archipelago, which was quickly swept away this year by a storm wave from Hurricane Walaka. Unfortunately, this island was demonstrably inhabited by numerous endangered species (such as the green sea turtle and the monk seal), which fell victim to the event.

In the picture: Hawaiian monk seal, which could use the safe harbour on East Island before the sinking. (Picture source: Pixnio) Here one of the rare records of paradise near Hawaii, when everything was still intact (drone flight East Island).

The Before and After of the Lost Paradise East Island Some old maps show islands that no longer exist today. For example Sandy Island, an island between Australia and New Caledonia, which was known at the latest in the 19th century. It is said to have been 120 square kilometres in size. Since it was also recorded on numerous maps, one may become even today still suspicious. Both illustrations (below enlargement): R.C. Carrington, of the Hydrographic Office [Public domain], via Wikimedia Commons; map from 1908 - it is said to have been found on maps from the 15th century as well (but I could not check this yet)

Surprisingly, the following note can be read in the matter on Wikipedia: "Also on Google Maps the island was occasionally noted; Google Earth, on the other hand, showed a black spot at the place where the island was suspected. The Google maps on the seabed still show the contours of an elevation." Strangely enough, after a closer examination, the place is not only black, but a black pattern was practically applied. How can this be, if the island does not exist or did not exist?

Can it happen? Here is the proof of the strange black Google Earth "edition":

Many believe that discoveries were generally ancient mistakes or misunderstandings. This is also the case with Sandy Island. This would of course explain most easily why the island is suddenly missing today ... In any case, in 2012 they had looked it up and finally agreed that there was nothing (anymore) there. The strange black spot on Google Earth must have been an oversight, they reassured afterwards. So you generally have to correct satellite images because they don't correspond to the truth? There are strange things ...

Obviously only nowadays islands can come and go. If it concerns antique map entries, one is today scientifically by far faster with a judgement. The people of that time would have been wrong, is the objection as quick as an arrow. A map entry (in the case of Sandy by the discovery of a whaler named Velocity - allegedly only in 1876) was then copied x times without checking it. The date of the temporal discovery alone can already be questioned, as Cook already reported on the island in the 18th century. If so, then the map entry would have been falsified much earlier.

I personally could imagine that islands disappear for various reasons (especially geological ones, of course). However, islands that have been part of maps for centuries and were suddenly classified as non-existent in the 3rd millennium and censored on Google Earth make me think. Especially with such a size as Sandy Island. It can't be ruled out that it really isn't where it used to be ... but you have to ask yourself if such a disappearance can be explained so easily.

The disappearance of Sandy Island - if this island existed at all - is almost less strange than the phenomenon on Google Earth. Some claim that it could have been a navigation error as well as a so-called pumice stone raft, which can take on huge proportions and drift aimlessly through the ocean. Try to find pictures of such islands on the internet. There are only a few of them and they were only taken from a very great distance. They look like ice floes (if they are real) and they are supposed to be the product of underwater volcanoes. Such a thing certainly does not - or if at all - only rarely occur. Did Cook and his friends really fall for something like this?

Meanwhile there are even registers of so-called "phantom islands". I find the topic contradictory and fascinating at the same time ... reason enough to devote even more attention to this topic.