Not kissed awake yet: Granite frog from New Boston 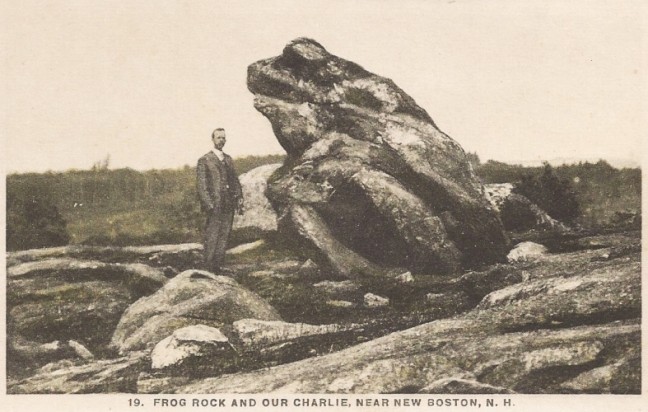 How long on the jump? The old postcard shows 'Frog Rock' in the wild before it was surrounded by trees. (Source: New Boston Historical Society). Its appearance is so characteristic that the result can hardly be regarded as a whim of nature.

The so-called 'Frog Rock' really exists: It's a big granite rock in New Hampshire (USA), southwest of New Boston ... and it looks exactly like on the old postcard.

I think this formation is really great, even though today it is sinking a little into the thicket of the forest landscape despite its enormous size. The signage there is not meant to be far away ... One obviously wants the monument to be forgotten ... Is this rock formation of natural origin or has it been influenced here? With granite this should have been difficult and I guess that geologists will play the "random map" here ...

Around 1900 'Frog Rock' was obviously not the only tourist attraction. In the immediate vicinity there is still the so-called 'Tipping Rock' - a rock that you literally only had to "tap" to move it back and forth. Apparently, around the turn of the century, numerous summer guests came from Boston to New Hampshire to stay in the rural hotels and escape the heat of the city. Basically an ideal picnic place ...

While nowadays 'Frog Rock' in the woods is increasingly hidden from the eyes of curious visitors, 'Tipping Rock' can no longer be moved. At that time, when tourism was still a big part of the region, people stopped at the Grand Hotel of Mont Vernon for a picnic near Bullfrog Rock.

As you can see in the Youtube movie, there are also numerous remains of old farmhouses and interesting ramparts in the forest. It would certainly be worthwhile to browse through the forest region.