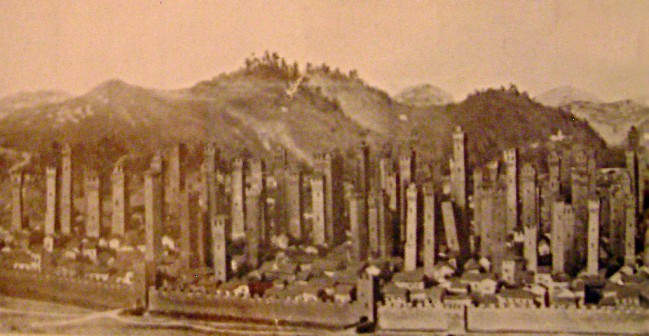 Bologna of the 11th or 12th century; Angelo Finelli via Wikimedia Commons; What looks like an original photo to me is a model of the medieval Bologna of 1917. >> picture source

Skyscrapers obviously have a much older tradition than assumed. If one is interested in the general term "skyscrapers", even "Sheeplepedia" leads us to the numerous high towers that constituted Bologna in the 11th or 12th century.

How long these long towers of the Middle Ages already adorned the city there is not known. One reckons in conservative "scientific" circles with up to 180 of these towers, which are said to have reached almost 100 meters in height. 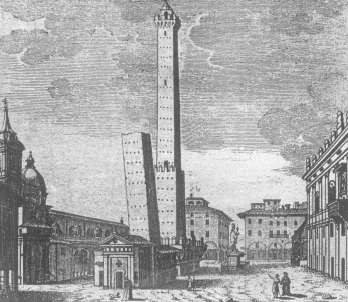 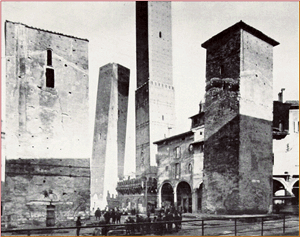 Ancient constellation of two towers in Bologna (Garisenda and Asinelli) that still exist today (source left of 1767: Blofeld of SPECTRE (http://www.gnu.org/copyleft/fdl.html), creativcommons), source right of 1917-1918: Biopresto, wikimedia commons, >>Link). The shorter or slower of the two towers looks "decapitated" from my point of view. Probably the demolition was not completed.

Here is the close-up view from today's time: sometimes there are merlons, sometimes domes, but rather seldom the crooked version without upper section. (Picture source Wikimedia Commons; Patrick Clenet, (http://www.gnu.org/copyleft/fdl.html))

In the absence of a more precise explanation for this multitude, it is suggested that the use was for defensive purposes, although a city wall already existed as a fortification around it. Personally, I am sceptical about this theory, as I cannot explain what would have been safer in such a large number of towers. If you look at the roomless staircases (see below), which offer no space for military, material or accommodation, I can only smile heartily at this assumption. 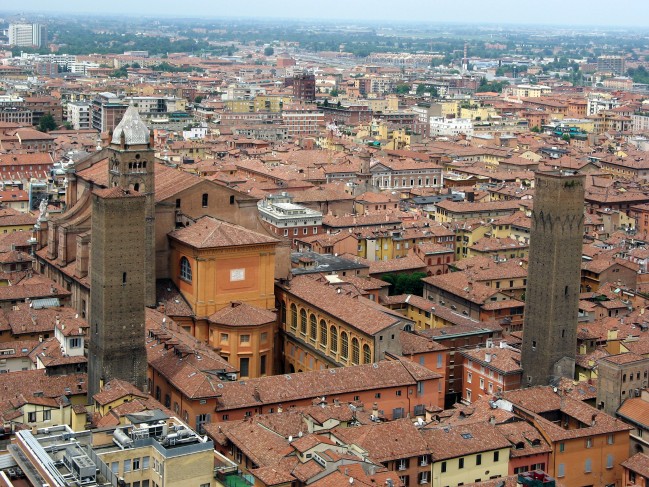 In today's view of these towers, I assume that the upper ends of the towers have been deliberately altered. (>> picture source; Szs [GFDL (http://www.gnu.org/copyleft/fdl.html) by Wikimedia Commons).

With the city wall then allegedly disappeared in the 13th century in a flash (in the course of this century they are said to have been sanded or simply fallen over) almost everything at towers that existed at that time. At the same time it is acknowledged that the construction of such towers took between three and ten years of work. This is highly unusual if one simply wanted to make one's belongings inaccessible or use the heights as defensive structures.

It becomes interesting when you take a closer look at the construction of the buildings. The square foundations are 5 to 10 meters deep, which seems a bit spartan considering the height. The lower blocks of the individual towers consisted of large blocks of selenite. Selenite is a transparent crystal, which is also called Marien- or Frauenglas. This material was also known to the Romans as "mirror glass". In Germany it was also used to replace glass panes in front of Marian pictures and reliquary containers. Strange that something like this occurred in the "supporting" building technique at that time. Particularly in the floor area, the use of such a building material seems strange to me, when it basically depends on sustainable stability. In addition, the façade was designed in such a way that the walls became increasingly thinner and lighter at the top, which I initially even think makes sense from a static point of view. In general, the inner wall was thicker, while the outer wall was thinner. The space in between was filled with stones and mortar - so far, so good. 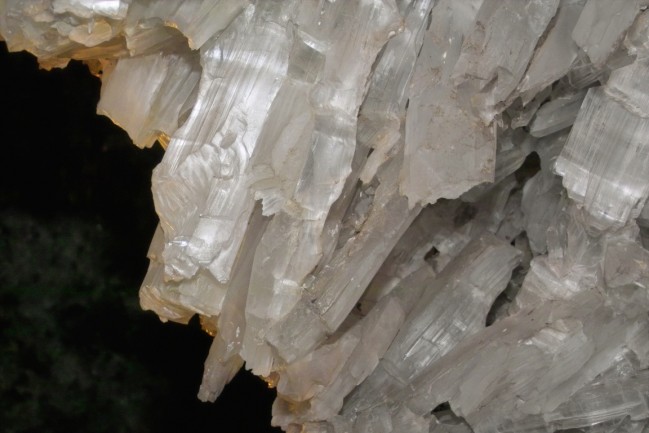 The two towers - like all the others - are equipped with regular openings in the outer facade. It reminds me optically of an unconventional power pole, from which lines originally started. (Picture source: Flickr, Link s. Click on the picture) 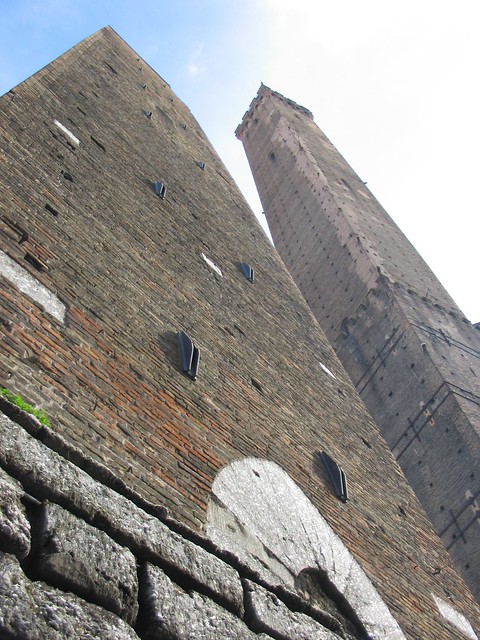 But what amazes me is the following quote (Wikipedia): "Normally some holes were left in the outer wall and larger depressions in selenite to support scaffolding and allow later cladding and constructions - generally wood-based". This spongy statement leads me to the personal assumption that there were continuous cavities between the selenite base and the top of the towers, which were not only specifically prepared for the attachment of decorations. If one looks at the countless perforated strips of the individual towers, the regular perforation seems to have served technical purposes in every case.

This is what it looks like inside the Asinelli Tower at the moment: Much too small for loopholes (Source: Flickr, Link s. Click on the picture) 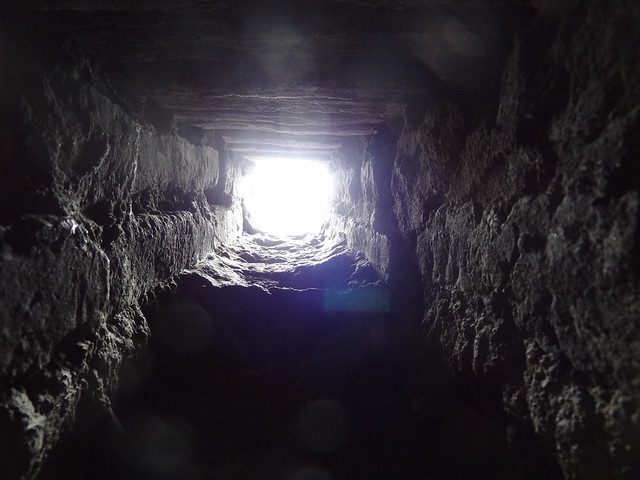 This is what it looks like inside the Asinelli Tower at the moment: Strange piping whose function and age I don't know. (Picture source: Flickr, Link s. Click on the picture) 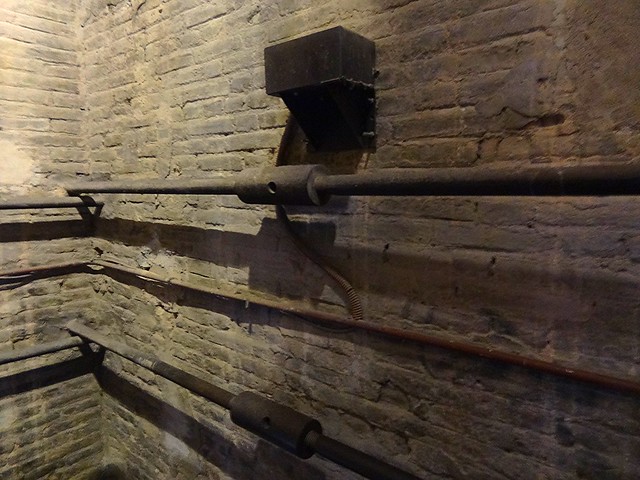 This is what the stairwell of the Asinelli Tower looks like. I maintain that the theory of the use of the towers for defence purposes is more than doubtful. Apparently they want us to grope in the dark here and they're not even very creative. (Source: Tango7174 from Wikimedia Commons; >> Link) 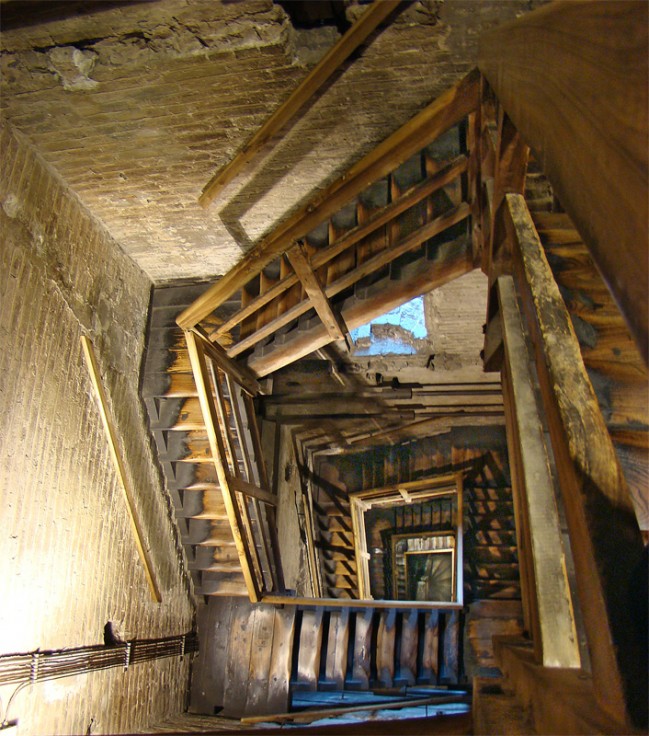 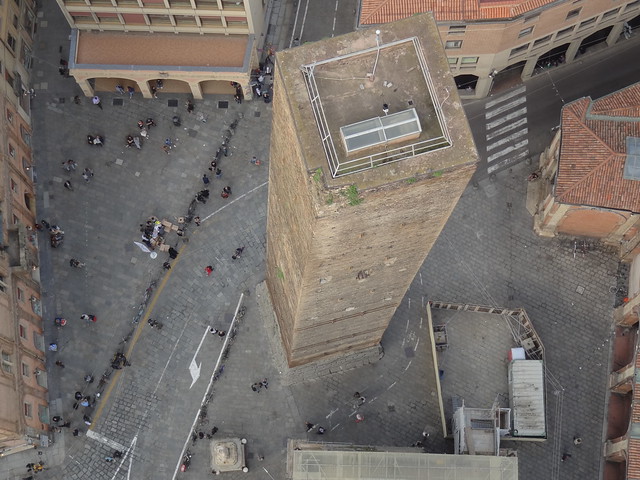 If one starts from the idea that the technical development at that time was much further advanced than one would like us to know today, it would also occur to me that we are dealing here with energy conductors that were installed in or around the high towers at that time. Nowadays, silicon crystals are also used as semiconductors - it may have been possible to use a free energy source at that time. Admittedly, this is only speculation, but what has such a large number of towers with holes lost in an urban area where, for paranoid reasons, one is only supposed to have been in stairwells?

Please let me know your ideas and suggestions - especially if you can come up with further evidence for a plausible theory.