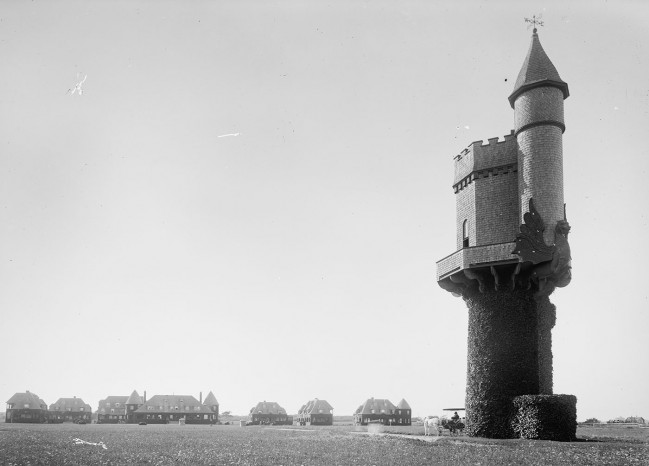 Cottages were built on Rhode Island in New England in the late 1880s when Narragansett became known as a summer resort for unforgettable summer holidays. These summer cottages were arranged around a park-like estate that remained in memory as Kentara Green.

In addition, a restaurant and a casino were built there. Beside the conspicuous cottages (in the background) there was a water tower in the middle of Earls Court Road, which was regarded as an important supply facility. A cylindrical stone base formed the foundation, above it was a wooden superstructure with an oversized giant grasp. We are told that this ensemble was built between 1887-1888 - in the same period when the city was experiencing its renaissance. A draft of the structure drawn in March 1887 is said to have appeared on the cover of the Architects and Builders Edition of Scientific American. There this tower is presented as a windmill tower with an attached water tank. But I couldn't research photos of a windmill at the upper gable anywhere.

Today only a stone tower covered with ivy remains, as the upper wooden part was destroyed by a hurricane in 1938 that hit New England. What I thought was a dragon is usually referred to as a bronze griffon and has unfortunately been lost in history. The griffin is a frequently used symbol in Tartar heraldry. A metal staircase apparently goes up to the side, but disappears behind ivy in the above illustration (right side). The following picture shows the stairway. Whether it was added much later after the construction of this curiosity is not known. 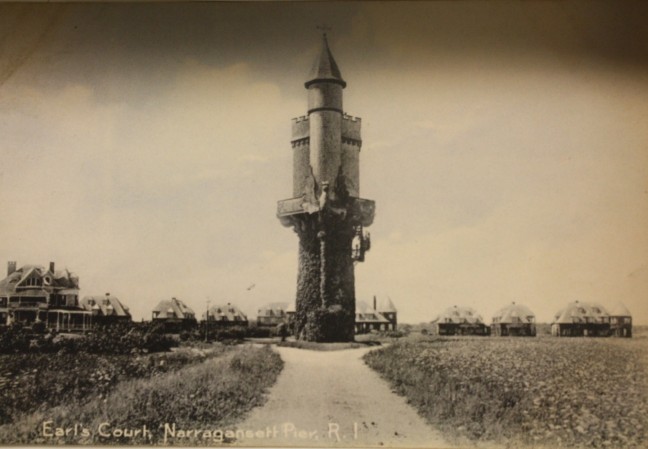 Strange decline and destruction of important parts of the town

In 1912 three of the cottages behind the water tower were destroyed by fire. This fire actually started in the kitchen of Sherry's Casino and with strong winds, sometimes typical of the area, the flames crossed Gibson Avenue to cause further damage. The early stages of the fire were actually photographed and can be seen on a historic postcard of that day.

What happened to the tower? In 1928 a violent storm destroyed the upper wooden part of the tower, but the cylindrical lower part of the Earl's Court Tower still exists today. It is rumored that the former owner saved the griffin, although it was never found. 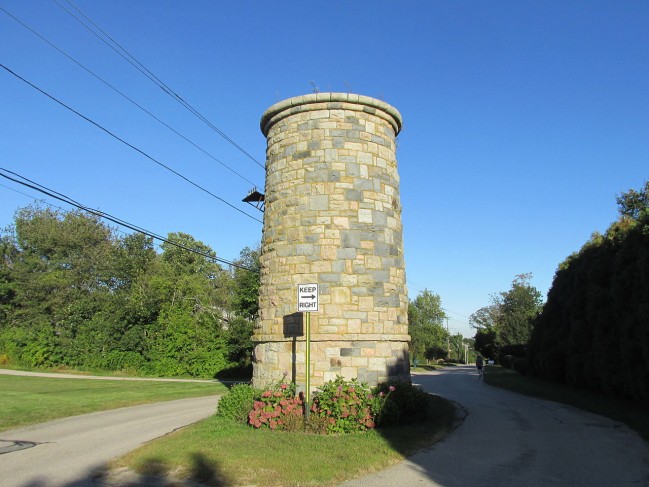 There are hardly any stones left in the area today. The once popular summer resort is said to have suffered at the end of the 19th century/beginning of the 20th century from the rise of automobiles. It is said that the tourists did not appreciate the connection to the place so much anymore and therefore preferred the mobility to the summer idyll. That sounds quite strange to me.

Other "catastrophes" occurred on 12 September 1900, when the prestigious Narragansett Pier Casino burned down (with the exception of the granite foundation and the walls of its magnificent Porte Cochere archway and towers). The fire had started in the nearby massive Rockingham Hotel and allegedly destroyed much of the village centre. The casino was considered the heart of the city and its loss had a direct negative impact on the attractiveness of the city as a tourist destination.

More towers that blessed the time of the earth: The Porte-Cochere, which was halfway fireproof because of its granite foundation and walls, had survived the fire of 1900 to a small extent. 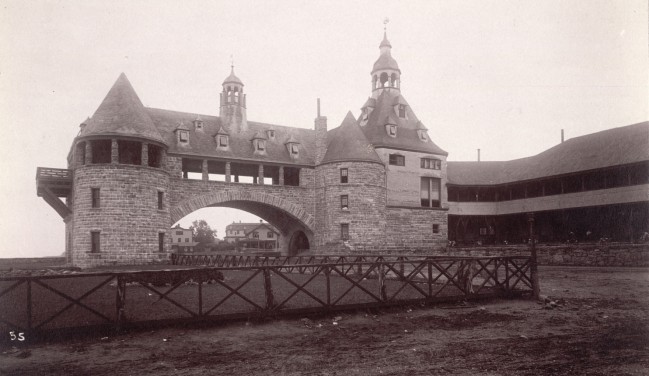 >> picture source Here the Narragansett towers before the fire

Here the few remains after the fire of 1900; >> picture source 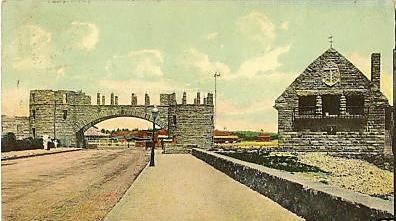 And this is what it looks like today; an entire part of the building is missing >> picture source Wikimedia Commons 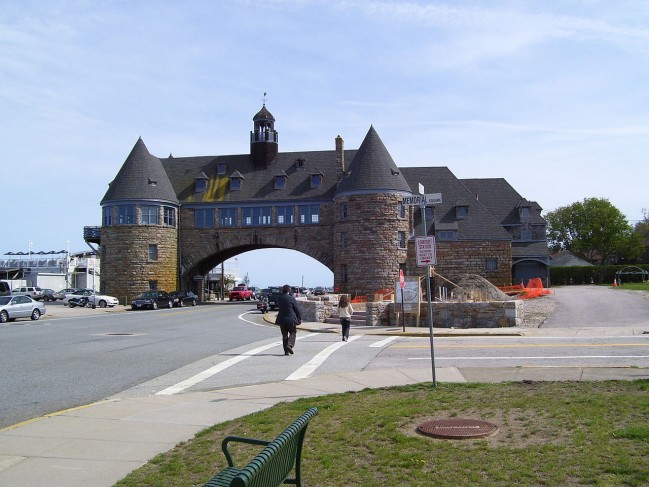 A short report from the NY Times from 13.9.1900 about the fire, which crossed whole streets:
"The summer season here ended suddenly and catastrophically this afternoon with the complete destruction by fire of the great Rockingham Hotel, Sherry's beautiful and famous Casino, the Hazard Block, the Knights of Pythias Hall and a number of smaller buildings.
While the violent storm undoubtedly greatly assisted the spread of the flames, it is likely that if the wind had been in the opposite direction, little would have remained of this popular summer resort.

The fire started in the upper part of Rockingham shortly after noon, and within a few hours almost all neighbouring buildings, including the casino, had been destroyed. The damage is estimated at approximately $350,000, half of which is covered by insurance. The fire is similar to the destruction of Ocean House in Newport only three years ago, but was much more extensive.

No one has yet commented on the facts as to how the fire was triggered. The large hotel was practically empty as it was closed for six days, so fortunately the fire remained unattended by the injured. In a few minutes, the Rockingham, six floors high and built entirely of wood, burned like a huge tar barrel.
The heat of the burning structure was immense, and although the wind coming from the west carried much of the smoke and flames at sea, the fire spread directly into the storm's teeth and obliquely towards the casino.
Every effort was made to save the popular resort, but within an hour the southern part of the casino burned, and soon the entire building with its magnificent dance hall, beautiful dining rooms and other attractive facilities was covered in smoke and flames. At about the same time, the Hazard Block, west of Rockingham, caught fire.
The traders in it were soon expelled and stood ready, while their belongings were devoured. This block was inhabited by about a dozen companies. After Hazard Black came the destruction of the Knights of Pythias Hall, and then the fire spread to the small buildings on Exchange Place.Here the firemen resisted, and the course of the flames to the north and west was maintained and the rest of the city was saved. In addition to the Rockingham, an annex was burned and used with the help of the hotel, while the steamboat pier half a mile away was slightly damaged. Fortunately, the Mathewson, not far from Rockingham, escaped destruction."

What didn't burn was torn down

The famous hotel New Mathewson also existed in the immediate vicinity of the beach. It was built in 1858 or 1868 (??) and was one of the largest and most popular hotels, which was extended several times until it could host up to 500 guests. The Mathewson was known for its upscale accommodations, including fine dining and hot and cold freshwater and seawater baths in some rooms. In addition, there is a wide piazza overlooking the Atlantic Ocean. Allegedly, the hotel did not attract enough visitors. Allegedly, it was believed that the hotel could not adapt to the changing social and economic conditions. Therefore, the hotel was demolished in 1919. The records and information to this epochal building are extremely poor. 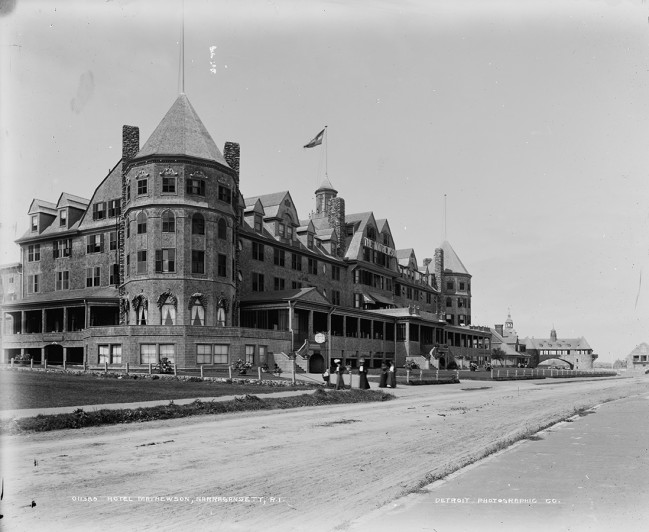 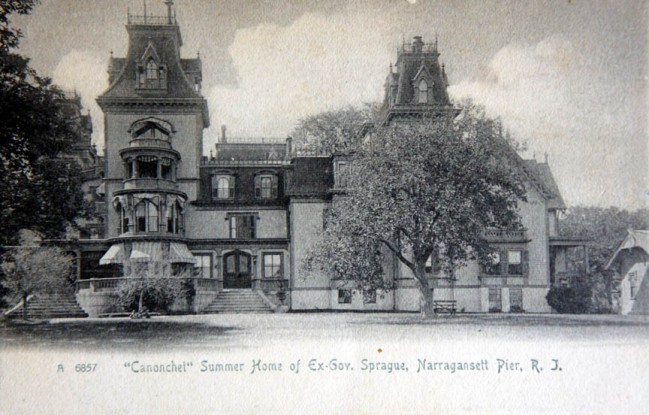 Old postcards of the magnificent building that was supposedly built in 1867. 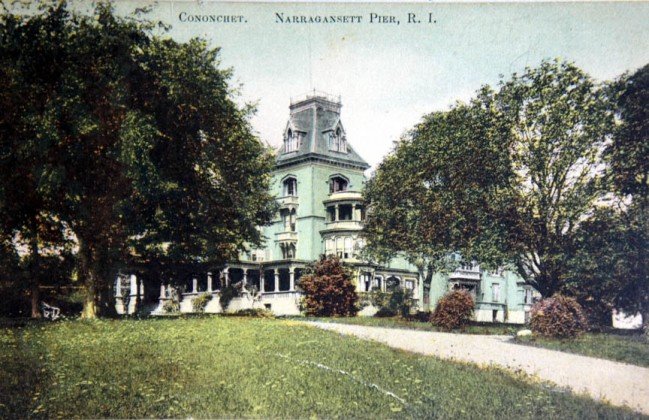 The Canonchet, a > 60-room building built in 1867 by the Civil War Governor and Senator (as well as the first President of the Narragansett City Council), burned down in 1909. As a place of many historical and romantic encounters, this was considered a great loss. The villa stood for almost 50 years until two a.m. on 11 October 1909, when sparks from a defective chimney draught lit the building. Despite the efforts of firefighters and firefighting equipment from Narragansett, Wakefield and Peace Dale, the villa burned to the ground. Although Canonchet's foundations survived the 1909 fire, strangely enough another fire in 1950 rendered them unusable. Here one can hardly speak of coincidences.