Matthias Quad was apparently a historical-geographical writer and engraver of the 16th century. Born in the Netherlands, later living in the Palatinate, he devoted himself to the production of an atlas in which the text was printed on the backs of the maps.

Today, the David Rumsey Collection has the 4th edition of his facsimile Theatum Orbis Terrarum (translated: World Theatre) also known as the Geographical Handbook / Cologne, 1600. One of the maps titled Novi orbis pars borealis, America (New Map of North America) shows numerous entries of cities with towers and permanent houses in the still completely undeveloped countryside, which was allegedly "discovered" by Europeans less than 100 years earlier.

Source map excerpt and complete map of the David Rumsey Collection >> Link <<, it is worthwhile for those interested to take a closer look at this map. 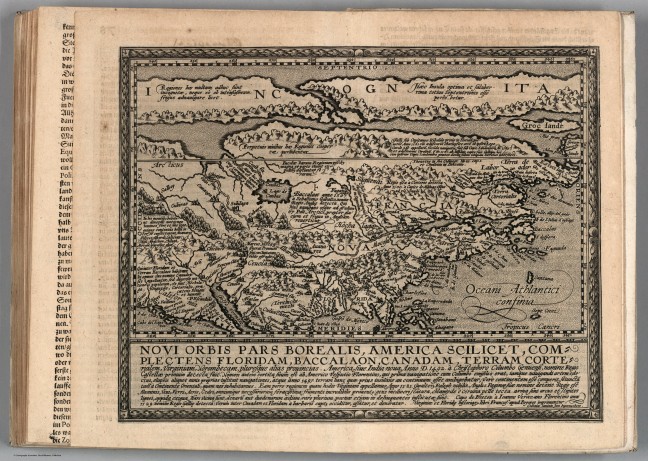 Now one may be of the opinion that these must have been either errors or wild fantasies. But the entries are quite detailed. A lake with the designation Lago de Conibas, on which even a place (as island?) is designated, cannot be located today on our current world map directly - however, one should consider this fact with the dimensions of this continental section. From the surveying point of view, there was hardly any equipment available to establish the localization without any doubt. In addition Quad is said to have referred to the work of de Jode, an older cartographer from Njimwegen. De Jode himself is said to have based himself on information from Dutch wall maps of the late 16th century. From my point of view this brings the dating of the cities/towns even further into the past ...
De Jode was the first to use both John White and Jacques le Moynes East Coast cartography - although he placed them inaccurately. Quad, of course, continues these mistakes, e.g. placing the nomenclature of Virginia too far north. A long narrow waterway in the north is said to be the Northwest Passage; the Lago de Conibas is also designated. Some names were surprisingly omitted, especially Bermuda, St. Augustine, Roanoke and Chesapeake. West of Florida is a strange "second" peninsula, which could be an early representation of the Mississippi Delta.
Curiously, the Michigan Lakes are not listed here unless the Atlantic access in the FRANCIA area is interpreted as an inlet for the lakes.

But what is amazing - even in the remote areas of Alaska and Canada you can find places and place names. It is hard to imagine that these were the first cities founded by European settlers. And what about the natives?

If you look at the map of Urbano Monte (1544-1613), you can see that even here cities have been located in the American "wilderness"(detail and source >> Link <<) 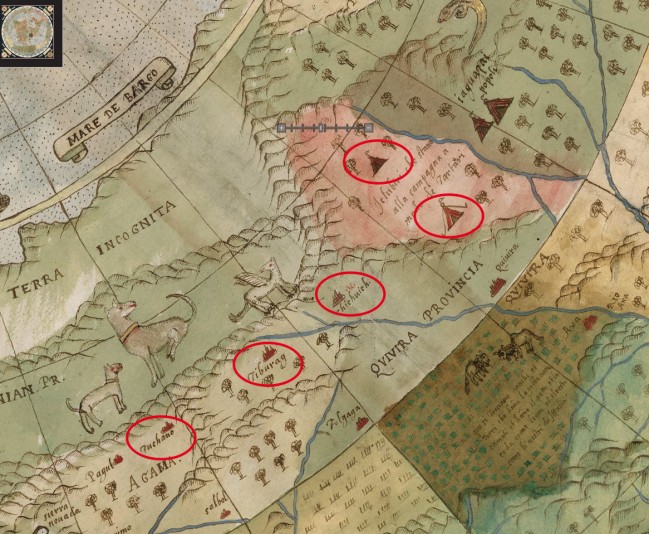 Monte has apparently distinguished in his pictograms between bivouac-like camps and firmly bricked cities. I find such details quite interesting. After all, it would have been extraordinary to revolutionary if there had actually been brick cities here. How would such a thing fit into our historical picture? Perhaps a difference was made between tent cities and brick cities?

There are other maps that illustrate a striking city symbolism, such as one by Giovanni Antonio Magini from 1597, which depicts the area from Florida (including Cuba and the Bahamas) to the north of the Appalachian Mountains. Here, too, there are cities everywhere. 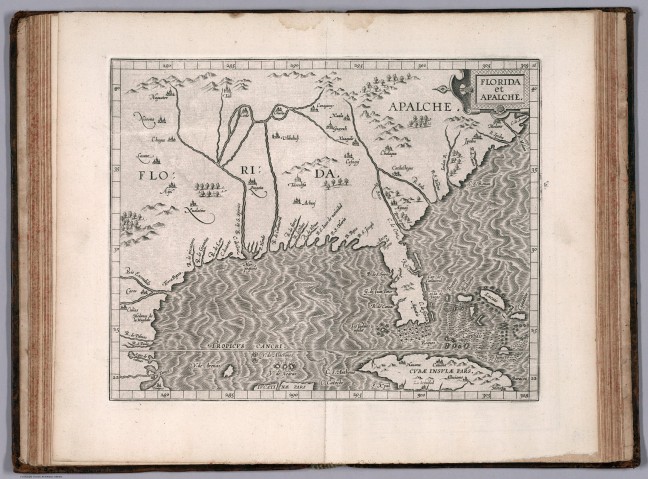 Somewhat less detailed than Quad is the representation of the places on the Mercator map of 1607. This map covers North/South America. The southern continent is already remarkably densely populated. After 100 years it looks as good as completely developed, which seems strange to me personally already. I hardly noticed any similarities of the place names in the northern part of America with the quad map here.

America, 1607 by Gerhard Mercator (1512-1594). Since Mercator lived earlier than the map apparently appeared in the end, the number of places is quite remarkable. Also here the big lakes of North America are missing, but anyway also the further details of the upper half of the continent. Map from the David Rumsey Collection: >> Link << 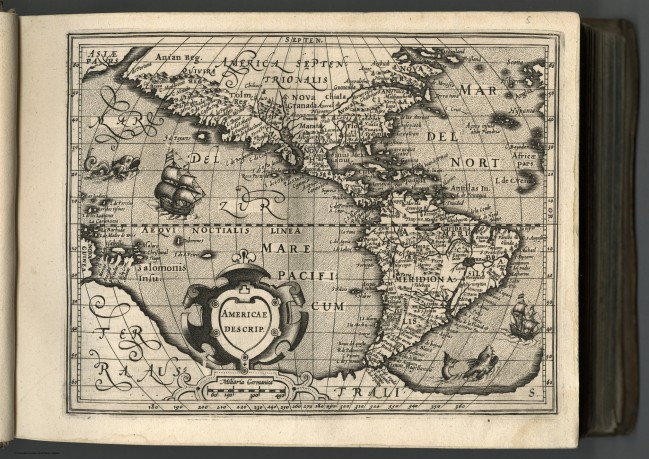 This article will be extended continuously.