Puzzling grooved pebbles from the Hotzenwald 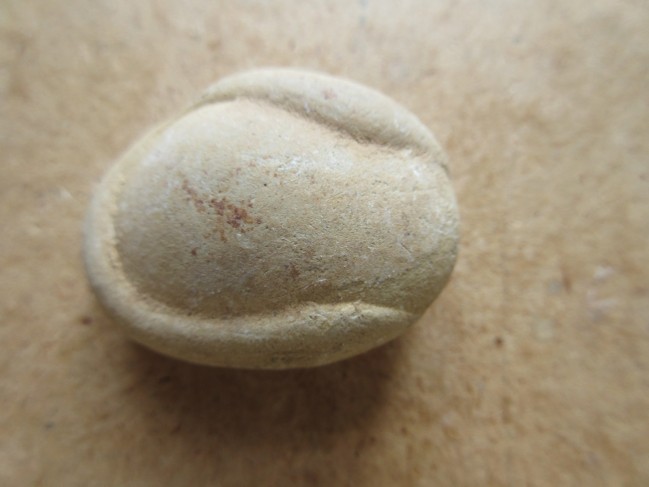 Imagine that: You wander through the mountains and valleys of the Hotzenwald - this is part of the southern Black Forest with a view of the Swiss mountains - and you come across large stone ramparts everywhere, which were erected long ago on the slopes and on the plains without any sense being recognizable. For more than a decade, the artist and local historian Paul H. Klahn has researched, measured and mapped these walls and presented them to archaeologists in essays and conversations. And there is still no explanation for these extensive prehistoric sites! They rise as if from an unknown time into our present. 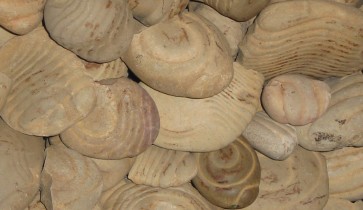 On the same "horizon" Klahn found quite unusual pebbles, which stand out due to regular bulges and are of remarkable beauty; also unknown to the experts so far. Inspired by an article by Paul H. Klahn in Synesis 2013, I called him and received the promise that he would show me the stones and stone walls. From 17 to 19 March 2014, four of us walked across the fields and wooded slopes of the Hotzenwald and saw these strange archaeological and geological testimonies. Klahn explains his photographs and cartographic elaborations as well as the analyses and expert opinions he has suggested on several CDs, which he regularly updates. The following two photos are taken from them. At this point I don't want to go into the prehistoric stone walls in more detail, but I would like to deal exclusively with the grooved pebbles, because they hold enough secrets.

The stones can be taken comfortably in the hand, they are well formed as by an artist, but more perfect than a human could be. The discoverer calls them groove stones. Figuratively speaking, they are not deepened grooves but parallel bulges that adorn the otherwise smooth pebbles. (By grooved stones we have understood the masonry stones or boulders with grinding grooves on public buildings, mainly churches, which exist throughout Europe - see my articles). A better fitting name after the place of discovery (Hotzenwald) could be: Hotzensteine.

When you first look at Klahn's stones, you think of fossils such as fossilized ammonites or cephalopods or brachiopods, but as soon as you have some in your hand, you know that they are not fossilized creatures but pure natural creations. Even if you might think that you have seen similar stones before, I must say that I have never seen such stones anywhere in the wide area between the Atlantic Ocean and the Indian Ocean, between the North Cape and the Sahara. And what seems even stranger: They can only be found in a narrowly defined area near Klahn's place of residence, in principle on a large field as well as on some fields of the closer surroundings, whereby even the rarer stones of the more distant fields look slightly different. And another peculiarity: Many stones are struck, the break edges are smooth and the interior is homogeneous. The traces of weathering are minimal, as if the stones were quite young; however, their degree of hardness is very high, namely 7 (like flintstone), significantly higher than glass, as far as the analyses have shown, and this could explain the relative intactness and the smooth fractures.

In comparison to the splendid specimens found by Paul Klahn and depicted in his publications, the stones shown here are less exciting. They were found by myself on the field during my walk and they let me feel the fascination of the strange shapes. 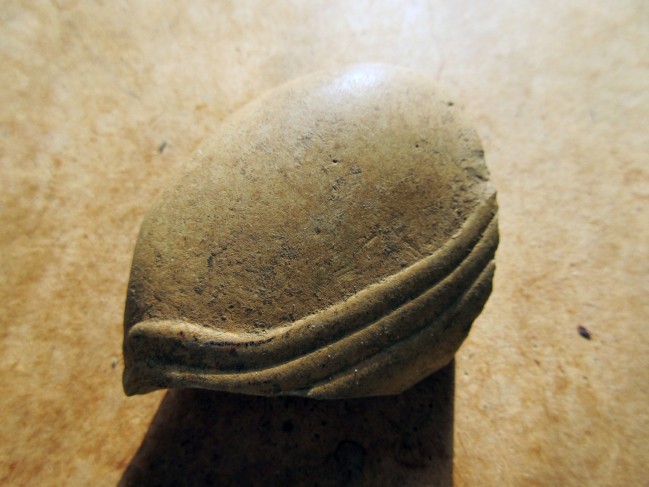 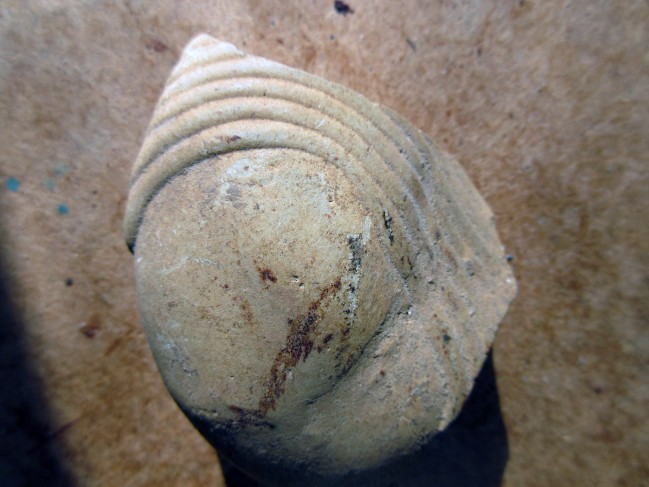 Three views of a grooved pebble: twice the front side, third the back side 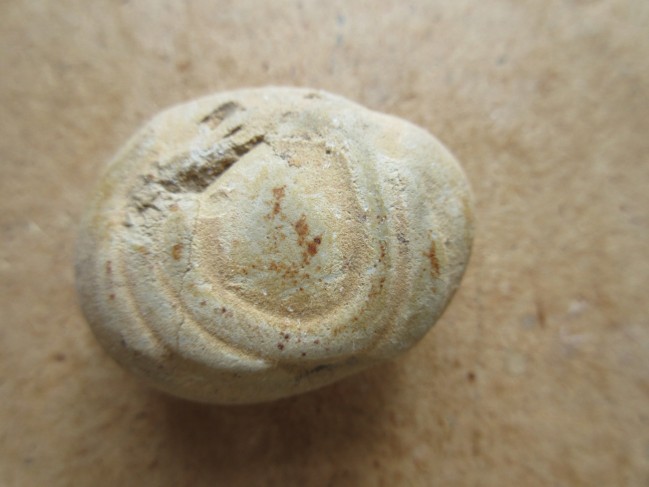 Front and back of another grooved gravel (pictures: © Uwe Topper 2014) 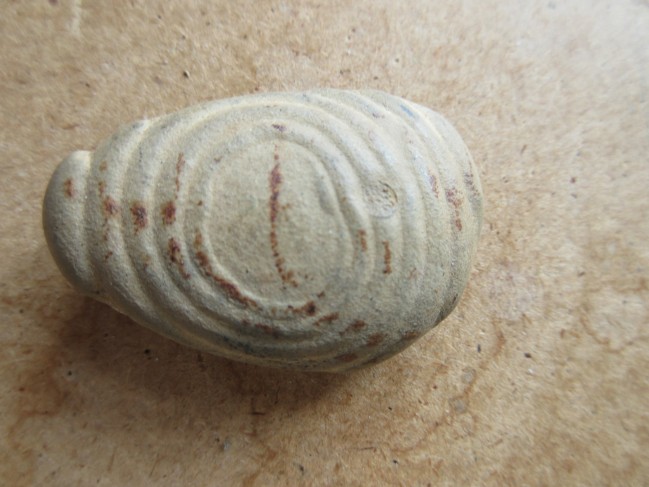 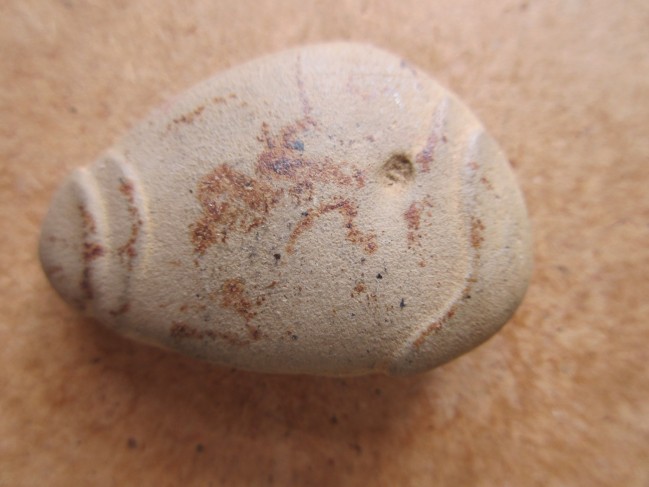 Another grooved pebble seen from above and below (pictures: © Uwe Topper 2014) 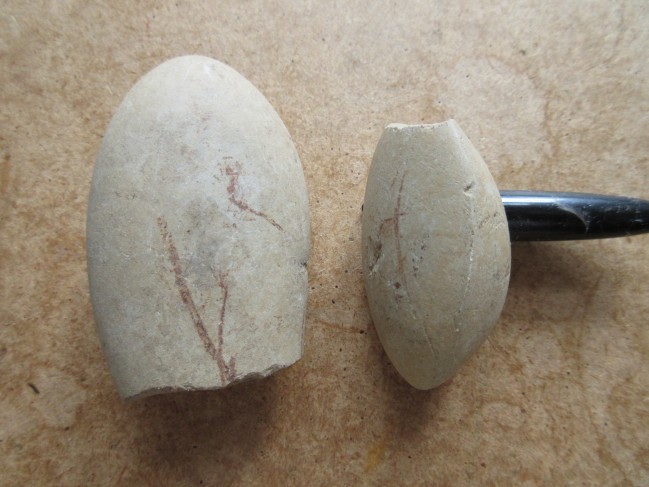 Also these two pebbles are of the kind discussed here, this time without bulges; on the right a ballpoint pen cap 2.5 cm as scale (picture: © Uwe Topper 2014)

Klahn and I have expressed about the same thoughts on the explanation of the mystery of the origin of these stones. They must have formed from material of a passing planetary splinter, which became viscous when it penetrated the atmosphere and accepted the grooves or bulges shortly before the impact in the soft field. A model similar to that of the Chladnian sound figures could be helpful in explaining this.

Klahn writes (2013, p. 25): "As this brief study already shows, a terrestrial (on or in the earth) formation of the groove stones can rather be ruled out. However, a genesis under catastrophic or cataclysmic conditions in the atmosphere is more than likely for the reasons given above. Further traces of catastrophic processes can be found everywhere in our landscape. The matter deserves further investigation - e.g. by flow scientists. It would also be interesting to know when these processes took place, for example".

And some years earlier he writes: "On the basis of the creasing on all sides one could therefore assume a fluid formation of the creasing stones in a medium oscillating with slightly different frequencies - e.g. under catastrophic conditions in the atmosphere or stratosphere. The still liquid, glowing Rillenstein material could therefore have taken on these astonishing forms in flight due to corresponding oscillations, e.g. caused by pressure or sound waves (so to speak by "Thunder sounds")." (Klahn 2009)

Our employee Walter Haug wrote: "The groove stones are really mysterious, but also very revealing. Since one of them hit a layer of limestone, this means that these swirling, heat-baked silica fragments came to earth at the end of the Jurassic, at a time when the dinosaurs were extinct and the earth was still covered extensively by massive lime deposits at the bottom of oceans that no longer exist today. Imagine that. First, the ocean had to be completely steamed away before the comet's mud blocks could hit the soft seabed. But these oceans may also have been flatter than today's." (in: Klahn, Mysterious Stones, 2009)

Volker Dübbers, Andreas Ferch and Helmut Ruf have expressed similar views: The stones are unusual, even unique, and presumably testify to a catastrophic event.

The question to interested parties is now: Who can contribute something? Who has found such or similar stones in other places? How could we concretely imagine the formation of the stones? Please also contact the helpful and sympathetic artist and researcher Paul Klahn (phone: 0152 0235 2970), who explores and documents these and other peculiarities of his homeland in sacrificial work.