Forsaken by all good spirits: The Ames Pyramid 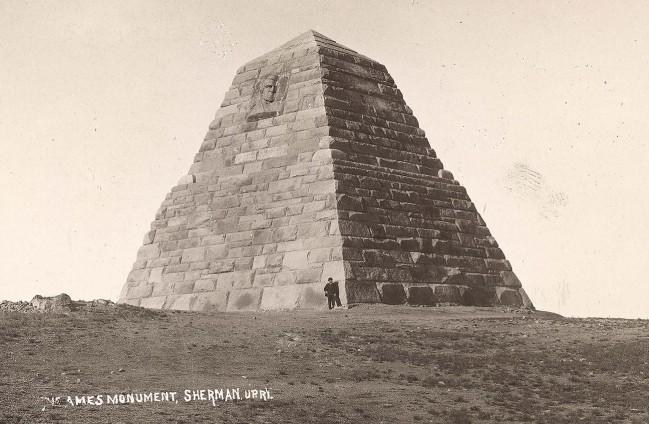 A man stands next to a pyramid-like monument with a face on it. Back label - C.R. Savage, art bazaar...medals...1891. The Ames Monument in Albany County, Wyoming, was entered into the National Register of Historic Places on July 24, 1972. It is said to have been created on the basis of a resolution passed by the shareholders of the Union Pacific Railroad Company at a meeting in Boston on March 10, 1875, in memory of Oakes Ames in recognition of his services in the construction of the Union Pacific Railroad Company. Image Source Wikimedia Commons.

The Ames Pyramid is located about 32 km east of Laramie, Wyoming (USA), on a wind-blown treeless peak south of Interstate 80 at the Vedauwoo exit. Officially it is a monument, a four-sided rectangular pyramid with a square base of 20 m and a height of almost 20 m made of light domestic granite. Today we know: The pyramid has an inner passage, which is strangely sealed, it runs (at least) along the first lowest row of stones.

Nothing to see around here; Image Source Wikimedia Commons 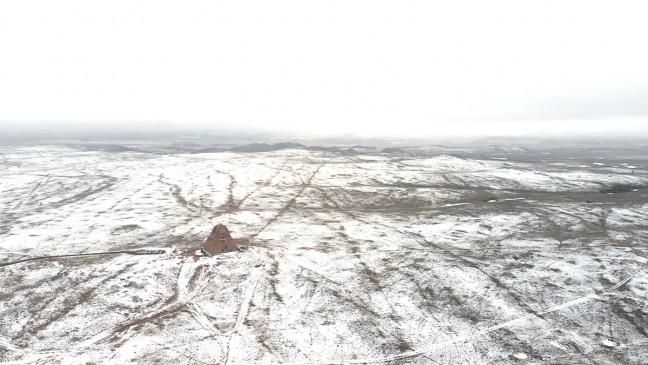 At the time of the railway boom in the middle of the 19th century, the brothers Oliver and Oakes Ames were important players in the railway industry. Their great plan was to build a transcontinental railway line, which today would be comparable to a trip to the moon. But despite the odds, the brothers made it happen, as Oakes raised funds from Washington in his role as a congressman, while Oliver took care of business as head of the Union Pacific Railroad. Unfortunately, the fame the brothers deserved was quickly overshadowed when Oakes became involved in a fraudulent scheme to finance the railroad. There is talk of corruption on a very large scale. 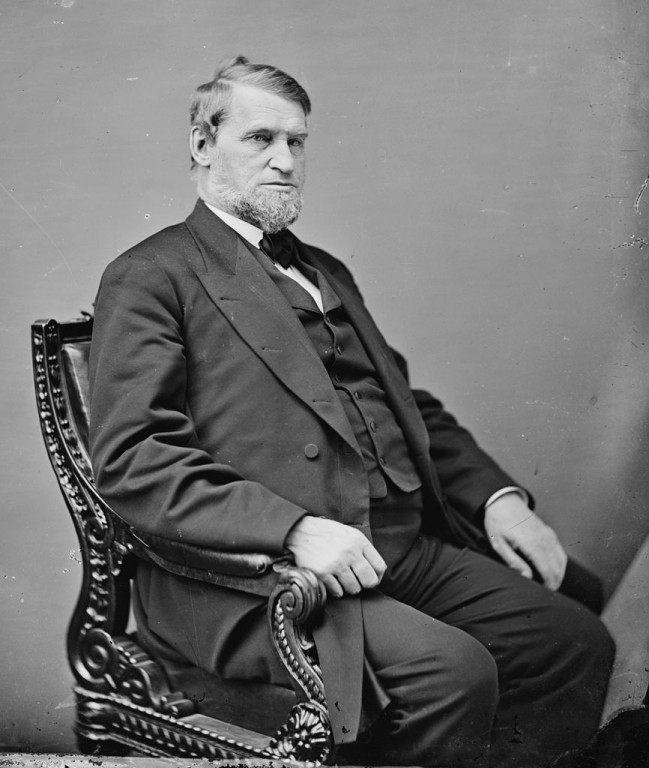 Picture: Oakes Ames. Convicted of insider trading: In 1872, it became known that Ames was selling shares of Credit Mobilier to other members of Congress at a price far below market value. The ensuing public scandal led to an investigation by the House of Representatives, which formally recommended expulsion. On February 28, 1873, the House passed a resolution formally condemning Ames "for attempting to draw the attention of Congress to the affairs of a company in which he was interested and whose interest depended directly on Congress legislation by inducing members of Congress to invest in the shares of that company. Only a few months later, he was dead. Image Source Wikimedia.

A monument to crime?

After both their name and the name of the Union Pacific were tarnished by the scandal, the brothers thought of a way to clear their name. They hired the famous American architect Henry Hobson Richardson to erect a monument to their glorious work. For 65,000 dollars (more than a million dollars by today's standards) a pyramid was built on the highest point of the Transcontinental Railroad on a desolate track in Wyoming. The more than 20-meter-high structure shows specially made reliefs of the brothers, with Oliver's face looking west and Oakes looking east towards Washington. 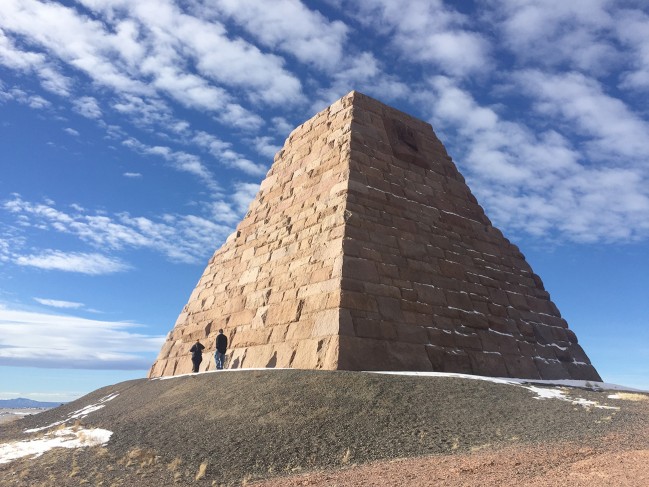 The design of the pyramid and some technical data: The hewn granite blocks at the base weigh a few tons each and are each at least 1.50 x 2.50 meters. Richardson is said to have quarried extra pink granite boulders from the nearby Reed's Rock. The Norcross brothers are said to have been awarded the construction contract and started work in 1880. A small settlement was built in Sherman to house the 85 workers who were involved in completing the monument over the next two years. (Gambling and drinking were allegedly not allowed).

So the workers built the pyramid about 300 meters south of the tracks of their railway line on a small hill. When the Ames Monument was completed in 1882, it was 91 meters south and 9.8 meters above the highest point of the original track of the Union Pacific transcontinental railroad. President Rutherford B. Hayes underscored the importance of the transcontinental railroad, and thus of the Ames brothers, by attending the monument's dedication ceremony.

In 1885, William Murphy bought the land on which the monument was located with the intention of using the pyramid as an advertising lit column. The Union Pacific Railroad Company, however, had other plans. The company received a special deed for the land in 1889. (That's where the term "Murphy's Law" comes from) The railway company's decision to move the tracks twice further south to use more moderate gradients over the Laramie Mountains threatened Sherman's fragile existence a few hundred meters from the monument. The city's death knell sounded in 1918, and the railway company closed its station building and moved the tracks south about 5 km. The inhabitants left Sherman shortly after and left behind a small cemetery, which still exists today. The ghost town of Sherman was subsequently demolished and the monument was forgotten. If you stand on the hill at the foot of the Ames monument, you should still see remains of the old railway tracks. The foundations of the district house, the revolving stage, the second station and the water tank are also easy to find. 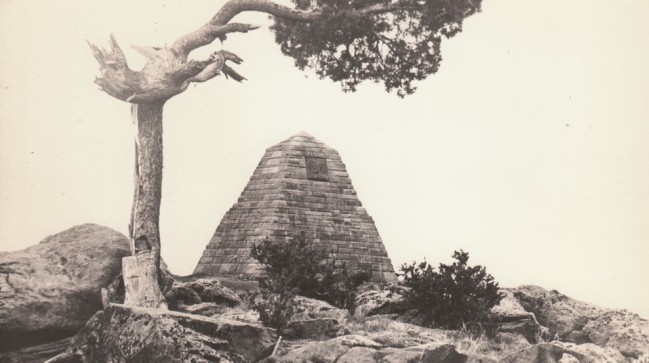 The destruction continued:
In the 1980s, the two portrait relief plates of Oakes and Oliver Ames by the greatest American sculptor of the time, Augustus Saint-Gaudens, were damaged by gunfire. The noses of the two brothers portrayed were particularly under fire..

Puzzles about backgrounds and construction

All in all, a strange chronology of contexts and events, as I personally find. Some mysteries are hidden in any case: 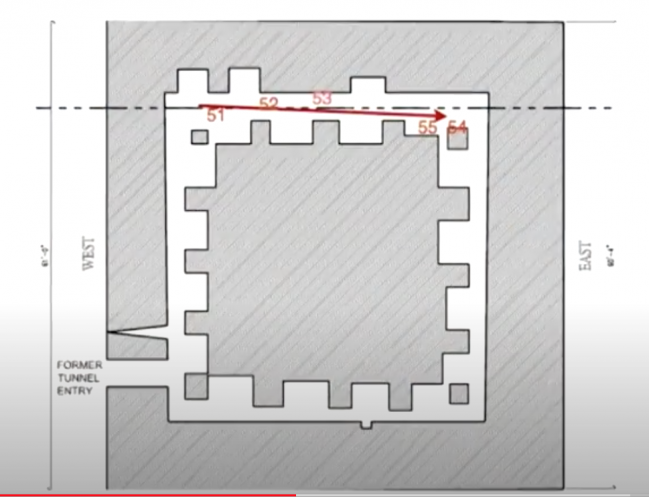 Plan of the interior tour and the cavities, according to the 2010 opening (source: video below)

Film contribution of the opening 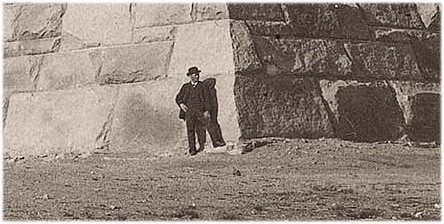 Section to show the size ratio of man - granite cornerstone. How do you want it to be transported there? Image Wikimedia Commons.

And the most important thing: I just can't get it into my head how the heavy granite blocks from Reed's Rock were put in place? After all, the distance was at least 800 meters. With horse carts? Strangely enough, neither the location of Reed's Rock (today's rock remains) can be found on a map nor construction photos of the pyramid. Instead, one finds some old photos of a possible construction site around the supposed rock group that served as a quarry. 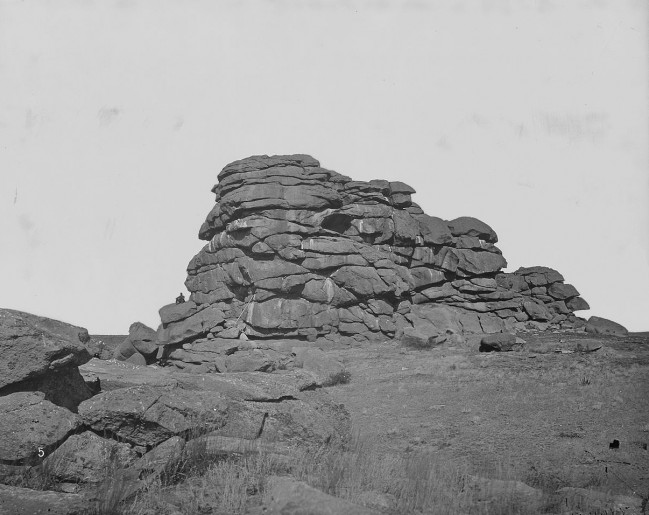 Presumed construction site photo or demolition site. For professional demolition from my point of view no proof yet. Too many questions remain open. 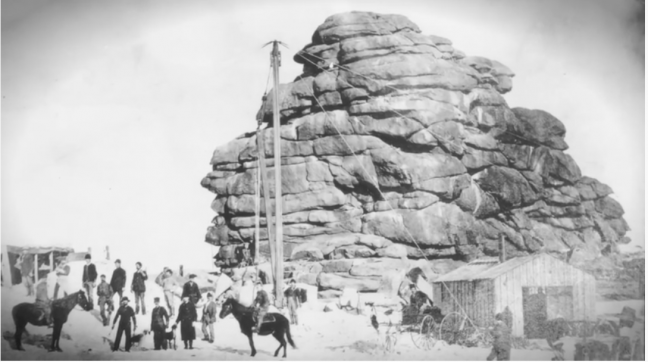