Was the great Salbyk burial mound a pyramid? 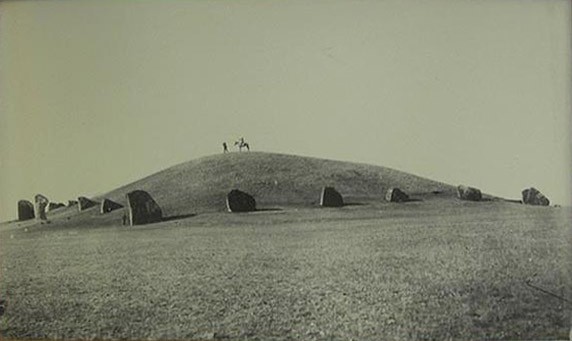 Picture of the still complete large Salbyk burial mound from 1910 with a height of about 25-30 meters and a diameter of 500 meters. At that time there was still an obelisk on the mound, which has not been there since the excavation. Picture source Wikimedia Commons (public domain).

Up to now I did not even know that a kurgan is the same as a tumulus - a mound grave, but piled up conically. Just like the Great Salbyk Kurgan 80 km from Abakan in Southern Siberia, in the Republic of Khakassia. The mound is located in the Valley of the Kings, where the Tagar culture is located several thousand years ago. No, it is apparently not an invented tribe from Game of Thrones, but a regional epoch, which one classifies temporally between the 9th and 3rd century B.C. The age of the monument is estimated at 2,300-2,500 years, but who knows for sure. 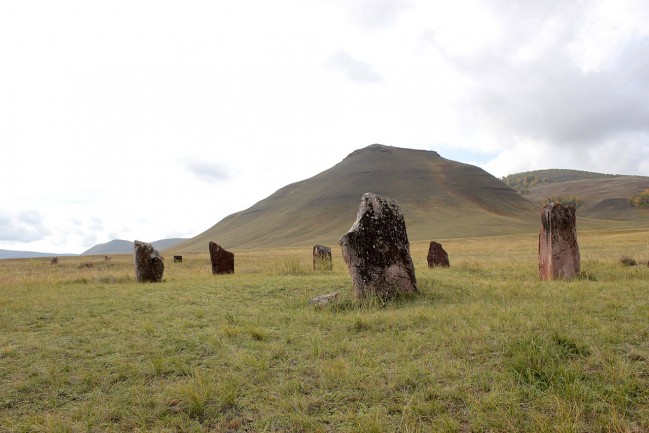 Menhirs weighing tons around the kurgan.

The grave mound was enclosed by a megalithic stone set squarely (70 x 70 m). These are huge slabs of Devonian sandstone with a weight of 50-70 tons each. One source claims that they were brought over a hundred kilometers from the banks of the Yenisei River, another claims that it is 60 kilometers to the nearest quarry. While carelessly adhering to the burial theory of the hill, it is also assumed that an ancient temple once stood here in combination with an astronomical observatory (showing the movement of the sun and moon). 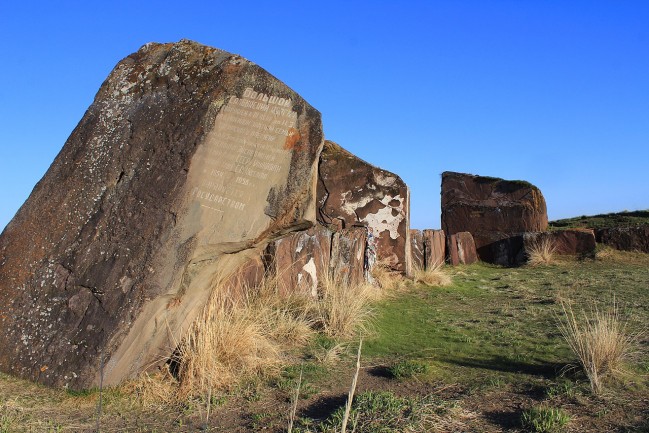 Menhirs in the Valley of the Kings around the hill turned into memorial stones.

In any case, as in other cases, it remains a logistical or technical mystery how these rocks were brought and placed. At the corners and sides of the stone ring borders there are numerous big menhir colossuses, 23 in number, each of them up to 6 metres high. 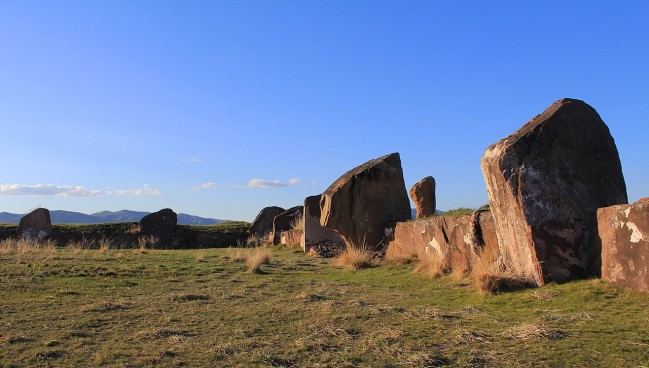 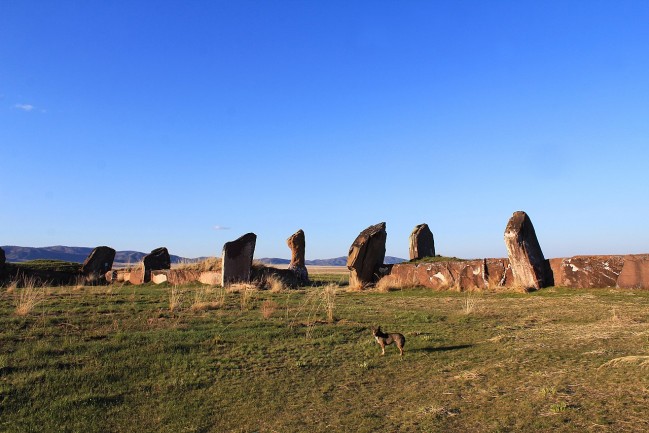 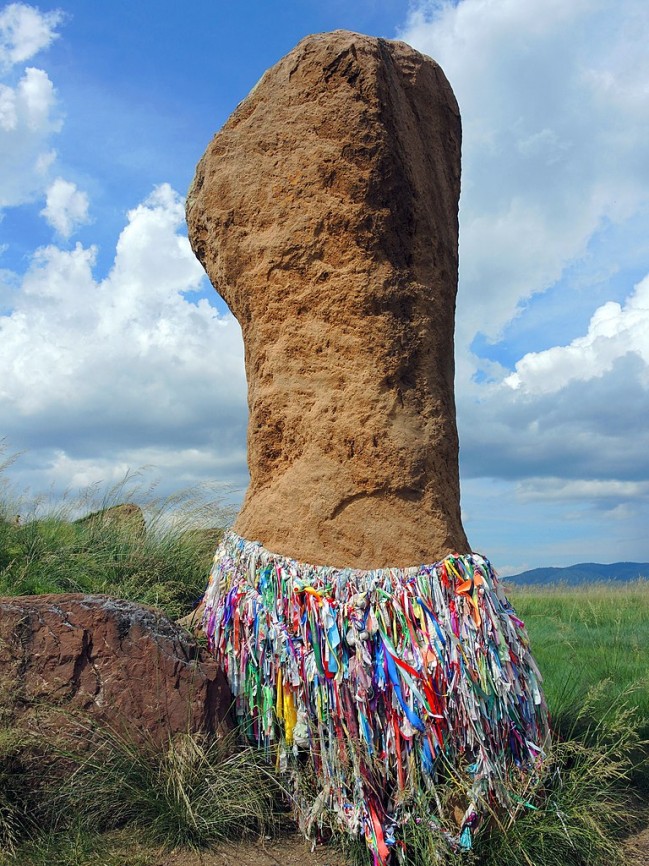 Folkloristic decoration on one of the up to 6 meters high menhirs.

Before the construction of the huge earth dam inside the megalithic enclosure there was a crypt made of tree trunks in the shape of a truncated pyramid. The crypt was covered inside and outside with a thick layer of bark, had a height of 2.5 m and a depth of two pits covered with water. As far as an explanation, directly under the center of the hill it was obviously not located. 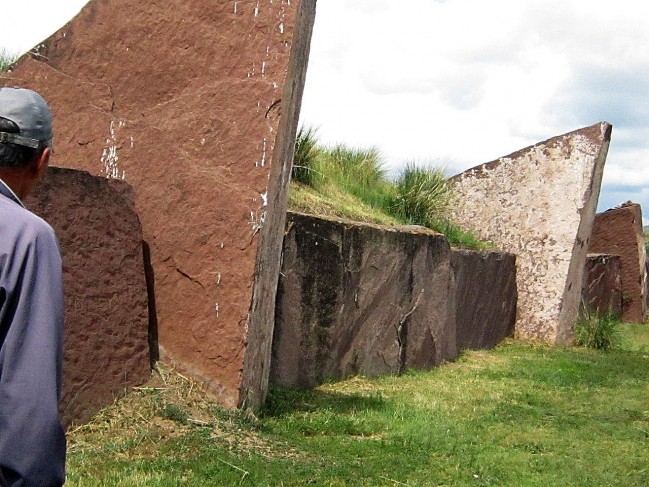 Gigantic wall mounting plates at the edge of the hill (west side), clearly machined or cut to size beforehand. 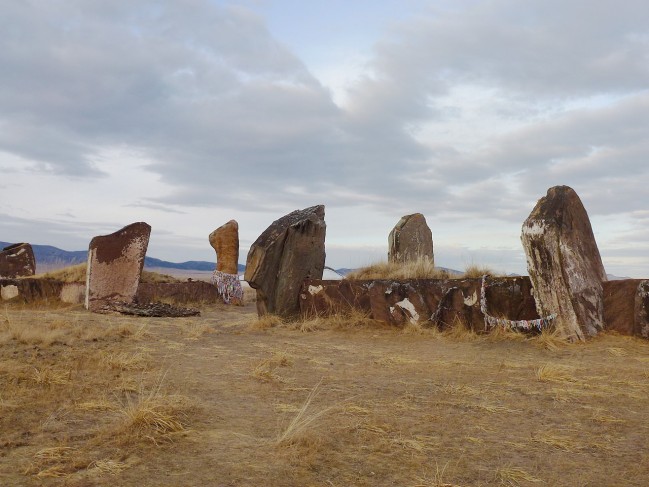 Menhirs in the area of the outer rim attachment. With this hill one speaks of the original form of a pyramid in the height range of an 8-story building.

The large Salbyk "burial mound" is the largest megalithic structure of its kind in the central Yenisei basin. In the Salbyk steppe there are 56 mounds within a radius of about 5 km, 5 of which are only slightly smaller than the large Salbyk mound, while the others are 4-6 m high. A characteristic feature of the Salbyk group of hills is the pyramidal shape of the slope, which is particularly noticeable in the morning and evening hours. This makes me wonder whether we are really dealing with artificial hills here originally. 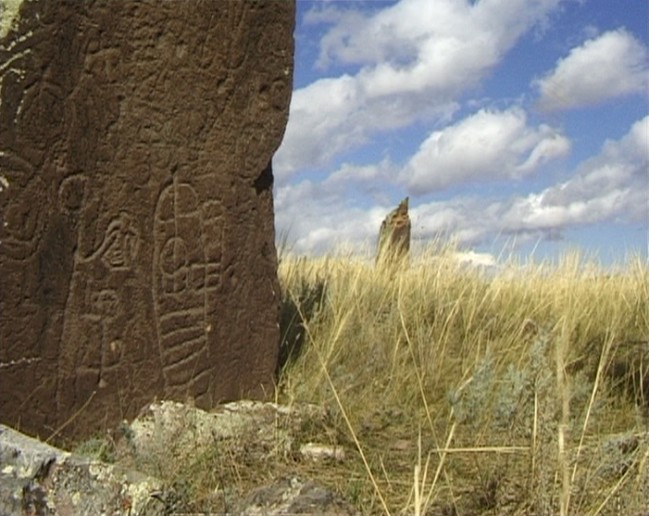 An expedition of the Institute for the History of Material Culture and the Khakassic Research Institute for Language, Literature and History, led by S. M. Mukhammadov, took care of the excavation in 1954-1956, which obviously went very sloppily.

"Under the corners of the monumental stone enclosure a human "foundation deposit" was discovered: the bones of adults and children. In the western half of the kurgan, a beam chamber with a pyramid-shaped wooden roof construction was embedded in the ground as a cover, which had apparently been accessible for further burials over a longer period of time - a tunnel-like passage led from the west through the sod kurgan into the chamber. It was later brought to collapse when the burial chamber was permanently closed. Unfortunately, due to insufficient documentation only few details about the structure of the kurgan are known. The total plundering of the burial chamber thwarts a closer look at the burial equipment of a royal tomb in the Minusinsk Basin.
In order to close the gaps in research in this important find region in Southern Siberia, a project for a comprehensive investigation of the kurgan of Barsuchiy Log, 35 km north of Abakan and not far from Salbyk, was carried out in 2004. Although excavations have been carried out in the Minusinsk Basin for almost 300 years, this is the first time that one of the monumental burial complexes of the Scythian Tagar culture has been investigated here with modern excavation and documentation material. The Barsuchiy Log kurgan, still about 10 m high, is a special feature among the Eurasian large kurgans due to its pyramid shape. In addition, it has an approximately 55 × 55 m large complex built of massive stone slabs with an entrance in the east, a characteristic feature of the Tagar culture in this region. The investigations revealed that the kurgan was built of sod, as was probably the case with the large hill at Salbyk. However, the outer mantle of the kurgan at Barsuchiy Log consisted of orange-red clay blocks; it was therefore visible in the steppe for miles around as a red pyramid... All the large kurgans in the steppe north of Abakan between Salbyk and Barsuchiy Log show huge funnel-shaped pillage pits west of the centre of the burial mound. The grave robbers knew this too, and they undertook enormous earth movements. This extreme effort is actually quite unusual for looting in recent centuries, and perhaps Barsuchiy Log provides an explanation: The burial site at Barsuchiy Log was completely devastated, numerous skeletal parts were missing, and the few that remained were scattered around in disorder. At the end of this destruction, the robbers deposited in the pit the head of a dog, which is dated to the 1st century BC (based on radiocarbon data) and thus belongs to a period immediately after the Tagar culture. This deposition of dogs or their heads in looted Tagar graves can be considered characteristic of the Tes culture, which developed after the Tagar culture and is associated with the Hsiung-nu culture. In any case, the Tes represent a different population group that entered the Minusinsk Basin from the southeast from 200 BC onwards. Obviously the plundering of these large kurgans took place at a much earlier time than previously thought. Several factors suggest that the intention of these new invading groups was to open and rob the royal tombs of former rulers in the region and, in the sense of a damnatio memoriae, to desecrate the tombs, thus breaking the sacred power of the former rulers before the eyes of their people and then planting their own. When so much energy is invested in the destruction of the kurgans and the obliteration of their meaning, this underlines all the more impressively the deep significance that these funerary monuments must have had for the people who built them".
(Source: Burial mounds of Scythian elites in theEurasian steppe: New discoveries, Albert Reckitt Archaeological Lectureread 1 December 2016, HERMANN PARZINGER, Fellow of the Academy) 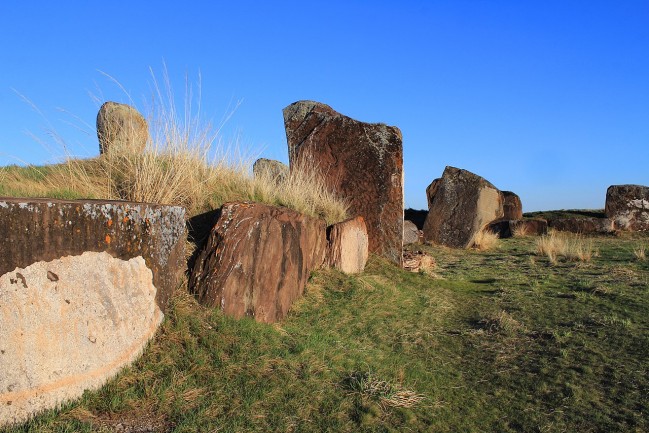 The mound was about 25-30 m high before the excavation in the 50s, today it measures only 11.5 m. At the time of the excavation, the mound was heavily swollen, but retained its geometrical shape, as the "cladding" of the mound was made of fine clay material. In the western part of the slope there was a pit with a diameter of up to 19 m and a depth of up to 5 m - traces of looting as described above. The original mound had a diameter of 500 metres.

The first description of the Great Salbyk mound was made in 1739 by the Russian scientist and traveller G. F. Miller during the "First Academic Expedition" of 1733-1743, where artifacts of knives, clay vessels, wood and petroglyphs were found to this day.

A visit to this impressive megalithic site in this treeless steppe landscape is definitely worthwhile.