Witches' Hut in the Basque Country 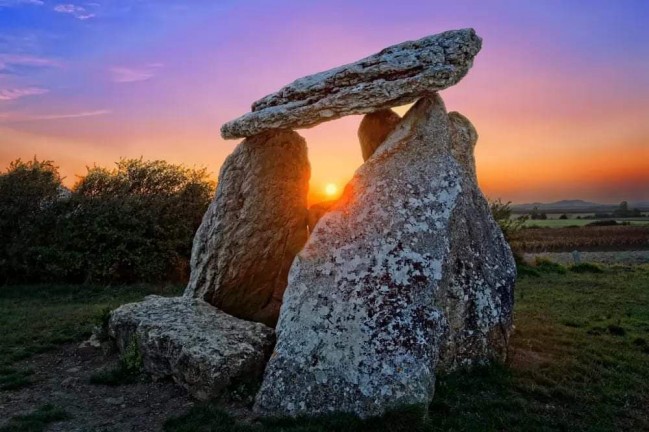 The dolmen "Witches' hut" in idyllic atmosphere before a sunset.

Idyllic and mysterious at the same time: this Basque dolmen called La Txabola de la Hechicera (in Basque: Sorginaren Txabola; German: witch's hut) was discovered in a very good state of preservation only in 1935 by Álvaro de Gortázar (this is how it is first called). According to official statements, Jose Miguel Barandiaran researched it and found two lapidaries, a polished axe of ophite, ceramic fragments and human remains during excavations. The finds are in the Archaeological Museum of Laguardia, Araba, other artefacts are in the BIBAT in Vitoria/ Gasteiz, Araba. BIBAT is an archaeological museum that collects the archaeological remains found in the various sites studied in the Alava area.

The broken ceiling slab consisted of three parts, but was restored (see below) and put back in its original position.

It took another 80 years after the first discovery to re-inspect this site. Between 2010 and 2014, Javier Fernández Eraso and José Antonio Mujika Alustiza, professors at the University of the Basque Country, carried out excavations and studies on behalf of the Directorate of the Service for Museums and Archaeology of the Alava Provincial Council. The "burial mound" has been reconstructed using the original technique of joining the stones together to make them hold without having to add further support from large stones. At the entrance, in front of the passage leading to the burial chamber, a ritual room was thought to have been identified.

It seems that the discovery was preceded by another one, which is misleading but at the same time enlightening: before this dolmen was duly catalogued by, among others, the eminent archaeologist and anthropologist Jose Miguel de Barandiarán, Federico Baraibar found it in 1879, so that it was excavated in 1889 by Julián De Apraiz, an important researcher from Alava. This also explains why it was not found long before. Maybe it was not dug up but rather demolished a complete Cairn at that time. 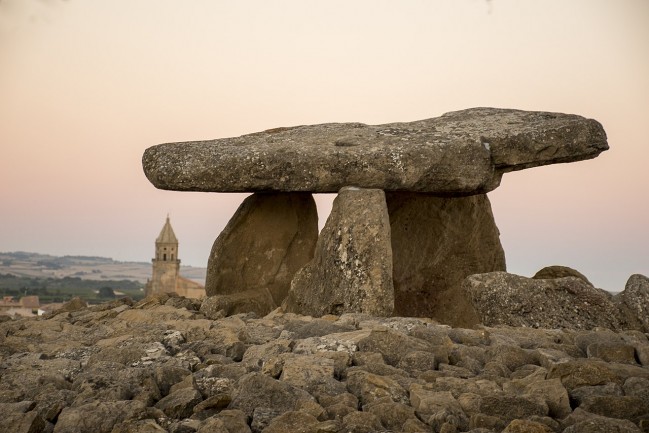 On this picture you can see how this clearly elevated site is surrounded by a myriad of smaller rocks. It looks like the outer skin of a former Cairn. Maybe it was more a demolition than an excavated "naked" dolmen as we see it today in this form. The term "excavation", as it was used in the 19th century/beginning of the 20th century, would get a completely new meaning under these circumstances. Since megalithic buildings usually received demonic or witch-related names from the Catholic Church as early as the Middle Ages, this place seems to have been known to the church for much longer. Therefore I personally doubt that this cairn or dolmen (probably the former) was not already known before.

Whether the present form is really still original can be assumed or doubted: Three large vertical stones support (at least today) the large horizontal flat (probably repaired, but perhaps not original) ceiling slab. Nine large stones form a passage or chamber in polygonal form. As in other cases, this is vehemently assumed to be a grave site. The photographer agrees with this theory. The grandparents of Begoña Maria had taken this picture some years ago.

I am sceptical about this estimation, or rather I do not want to spontaneously agree with this determination on the basis of the artifacts found for known reasons.

This exposed spot, which was certainly not chosen by chance, is worth a visit at some point. You can certainly feel the energy in this place.