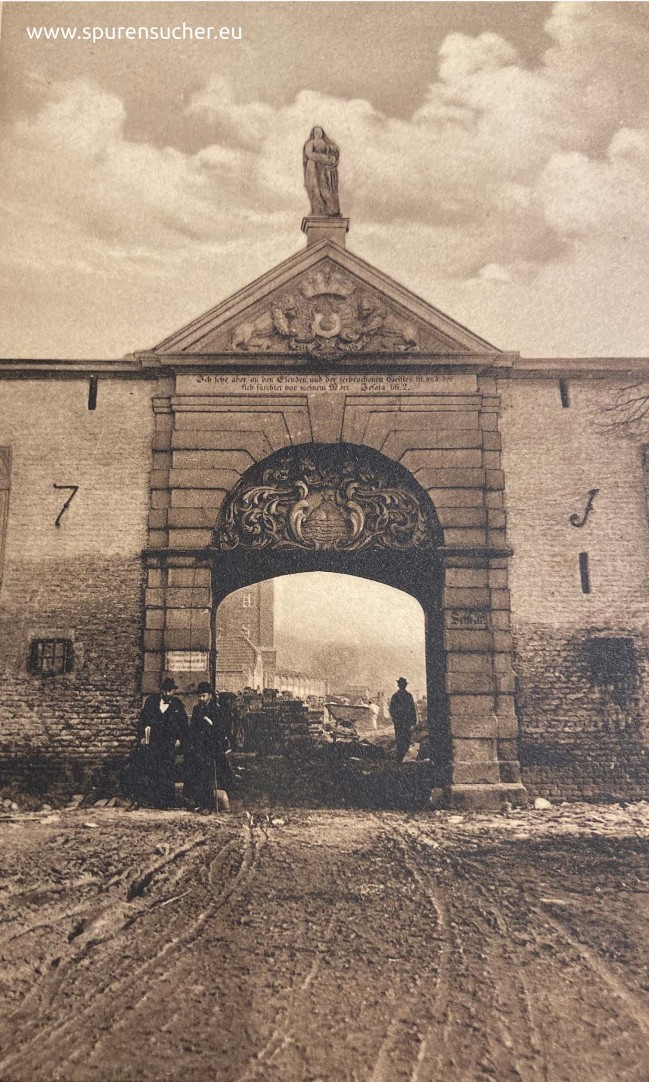 The former gate building of the Trappist abbey in the Düsseldorf valley (source: old photo postcard from my own collection).

The Cistercian monastery was once adorned with a stately entrance gate, which is not at all fitting for a monastery. At first, the complex and gate stood on the former Rhine island of Löricker Werth in Büderich (Meerbusch). The island was called "Insula Felix" ("happy island"). As there were frequent floods on the island and the brothers were not well liked there, it seems that in 1708 they moved to Düsseltal, a district of Düsseldorf. Tendentially, this may have been more than just a few floods, as the area of what was then the island in Meerbusch is now clearly mainland. The island no longer exists today. The space around the island must have been filled in by loess or mud floods in a relatively short time. 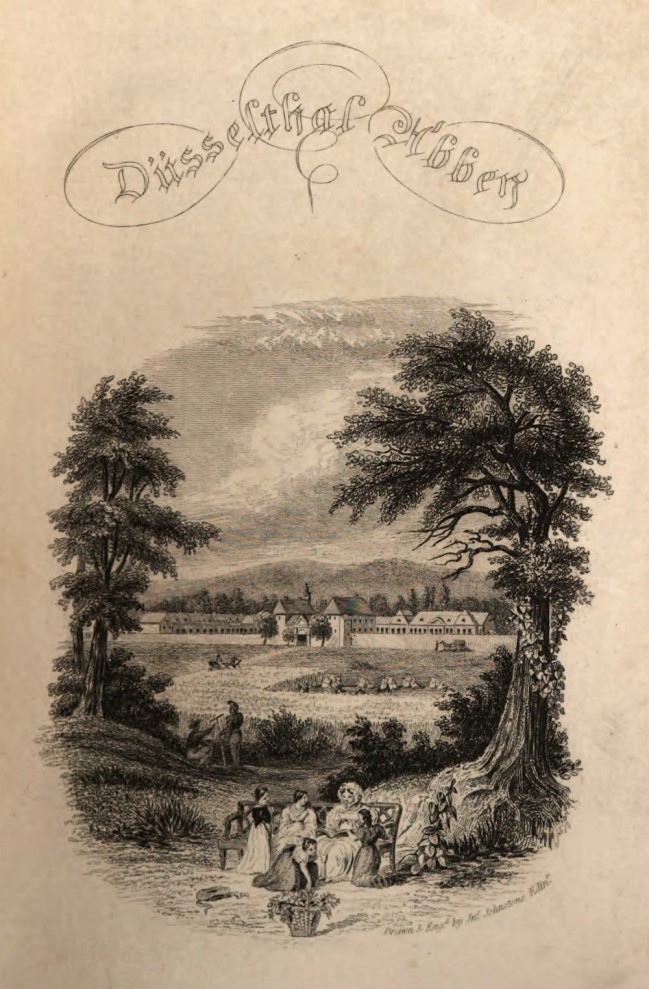 Drawing of the monastery from 1836, when it already functioned as an asylum for orphans and street children (image public domain).

The gable of the gate, which was also correctly called the middle building, was adorned with the electoral coat of arms flanked by two lions. On top of it is a Madonna, which in my view was probably added there originally much later. The arch rounding of the entrance gate was decorated with a wood carving: three hills emerging from waters, above them a star. Certainly an interesting detail. The same coat of arms is said to be found at the Villa Albani in Rome, which I personally cannot verify at present. In a photo by Julius Söhn (1900), one can see in the overall view of the building how high the water or damp mud must once have been to leave such clear traces on the masonry (see https://www.duesseldorf.de/stadtarchiv/stadtgeschichte/zeitleiste/zeitleiste-04-1700-bis-1800/1701.html). The trace can also be seen quite clearly on the postcard at a height of about 4-5 metres. Was the monastery or the later "rescue centre" in the mud or under water for a long time? In my view, the muddy ground in front of the entrance speaks volumes here.

In 1803 the building was secularised, and a wealthy nobleman named Count Adelberdt von der Recke-Volmerstein turned the complex into an institution for orphans and street children in 1822. The Düsseltal sanatorium was financed by the sale of "genuine Cologne water" brewed on the Düssel. Rosebuds and the slogan "For God and the orphans" adorned the labels of the perfumed water bottles from Düsseltal. Today, this should be an affront to all Cologne residents. The remaining hunger tower as the last remnant of the complex bears witness to genuine sacrifice: the building was called the "Hungertürmchen" (little hunger tower) because children of the rescue home could no longer open the suddenly slamming door of the tower from the inside and eventually starved to death in the tower.

The gate building was removed in 1901 to make way for Graf-Recke-Straße, which was drawn through the middle of the asylum and of which hardly anything remained. This was not the only tragic demolition of an interesting gate building on Düsseldorf city territory.