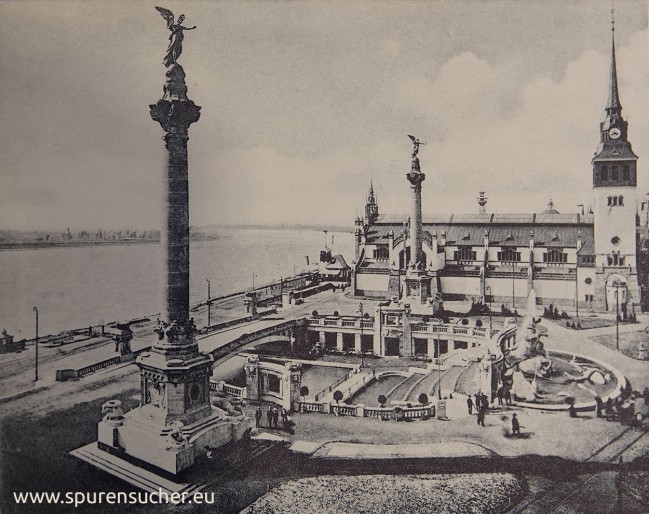 What we see here is reminiscent of the colossal columns in Rome, which were often also decorated with angels. The state of preservation of the entire complex in 1902 was apparently immaculate, the fleeting glimpse of the church in the background also seems to give the impression that we are dealing with a very well preserved historical original.

The first impression is deceptive, these are not monuments from the distant past, but supposedly the structural result in the run-up to a Düsseldorf event dubbed the Industrial and Commercial Exhibition in 1902.

I was immediately attracted by this monument of architectural artistry. I was all the more surprised when I heard that this was supposed to have been a large-scale exhibition setting. Such exhibitions were held all over the world at the turn of the century.

From the book "Die Industrie- und Gewerbeausstellung" für Rheinland, Westfalen und benachbarte Bezirke of 1902 (ed. by G. Stoffers) we learn about the church-like building that it did not serve any sacred purpose:

"The north side of the concrete works was flanked by the building of the Bochumer Verein. The main hall of this building consisted of three articulated arches with a span of 19.10 m and a height of 19.5 m up to the roof ridge. The trussed arches were supported on ball-and-socket joints, with a spring joint in the apex. The main hall was adjoined by low side halls 6 m high and 6.5 m wide. The front gable front was flanked by a bell tower which rose to a height of 70 m and was constructed in iron in its 40 m high lower part. The top was made of wood. The heavy character of the large building, determined by the iron construction, was softened by a decorative design of the gable fronts on the long - and transept in the Gothic style. In the main façade to the east and in the transept gables, large tracery windows were arranged in wide pointed arches closed above an open-work gallery; the corner pillars and all articulations stood out in reddish sandstone imitation. Further decorative details were the buttresses with striped, tile-red roofing and a number of spires with the green tone of oxidised copper helmets, all ending in gold knobs. Two resting sphinx figures in bronze colour and on an unarticulated plinth guarded the main entrance, into the deep reveal of which was clamped a wide, strongly relised and likewise bronze-coloured bead. The interior, covered by a mighty glass roof, with the uncovered truss of the iron framework in contrasting colours, made a grandiose impression, enhanced by the tasteful arrangement of the grandiose exhibits. The giant window in the west side showed a blaze of flames in art glass and formed the serious background for a huge belfry. The high gallery parapet was decorated with the colourful coats of arms of many states."

So this is supposed to be a concreted facility. The Bochumer Verein had a large presence at the fair at that time. After further research, we learn that the exhibition hall of the Bochumer Verein (church-like complex in the background) was first built for the exhibition by the "Hein, Lehmann company (traditional company in Düsseldorf), then dismantled and rebuilt in Bochum and thus became part of the complex of the Bochum Jahrhunderthalle. Allegedly, inscriptions from the Düsseldorf exhibition can still be seen there.

"The nave of the original hall is 66 metres long, 20 metres wide and had a height of 21 metres, the side aisles are 6.5 metres wide and 6 metres high. The façade was designed in the shape of a Gothic church to commemorate Jacob Mayer's first successful attempts at steel casting in 1851, as the first products successfully cast were bells. However, the 70-metre-high bell tower with a peal of three bells was not later rebuilt in Bochum. The façade has also not been restored in this form in Bochum." (Source)

Below you can see the hall construction on the right side of the "church tower" in Düsseldorf. A rather strange concept. Whether this church tower was really built by the Bochum association in the end is questionable in my eyes. 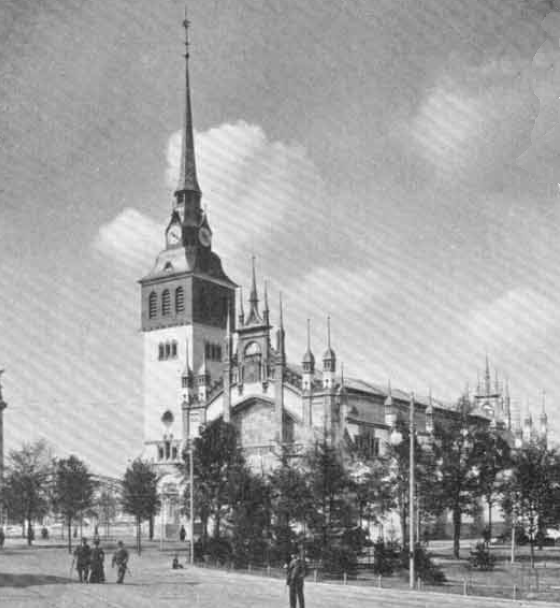