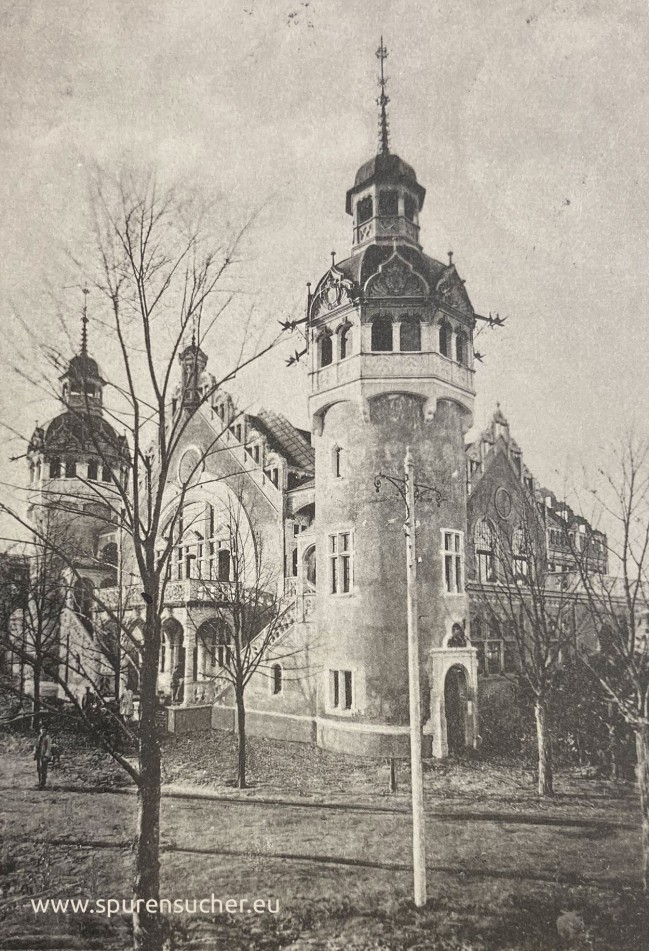 That's right: a pavilion, because supposedly it was not a "real" building. How was such a thing achieved? Does it look like a simple temporary trade fair construction scheme to you (steel/iron scaffolding with wooden or plaster walls)? The buildings are said to have been constructed mainly of fireproof vaulted and wire plaster walls. Incidentally, the exhibition lasted less than 6 months, but is said to have accommodated 2,700 exhibitors and 5 million visitors.

The overall architectural management of the exhibition was taken over by two Düsseldorf architects from 1901 onwards, after the Hamburg architect who had developed the plans of the exhibition site for 168 exhibition buildings is said to have died unexpectedly. So here we are again dealing with a utopian-sounding fast-track building programme.

"The pavilion of the Rheinische Metallwarenfabrik in Düsseldorf, which is Krupp's only German competitor in war material, will be kept in the pleasing forms of the German Renaissance and will be executed by the firms Hein, Lehmann und Co. and Max See in Düsseldorf according to the design of Professors Schill and Kleesattel. The building covers an area of 1200 square metres and consists inside of a 17.5 m high central nave with two lower side aisles which project into two 25 m high towers. The top of the portal gable is about 20 m high. Two flight of steps lead from the steps of the main portal to the tower entrances, creating a very attractive exterior to the façade." "

Of course, there are no construction plans or photos of this pavilion. Interesting again is the supposed ornamentation on the tops of the building. A Renaissance building for an arms and munitions factory?

Strangely enough, it is not even certain today how long the pavilion stood there after the exhibition (for me an indication that the building might not have originally belonged to the exhibition). It is said to have remained "...in situ until at least 1904...". Why do we not know more about this?