From canapé to ascent 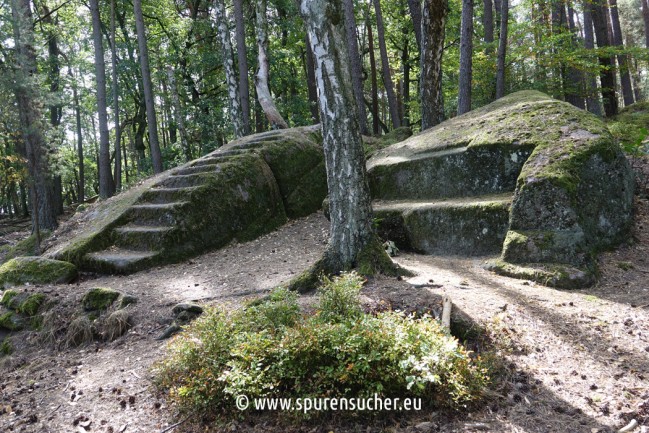 Third stage on the historical circular path of Leistadt (near Bad Dürkheim): Beside the so-called "soup bowl", which is supposed to be a medieval right- and border monument, which was established earlier during the final meeting with a drink after crossing the district boundaries! (allegedly sometime between the 12th and 18th centuries) ... Did one really make this effort to set up a natural basin for a drink? What should one have dumped there? Beer, soup? Who would believe such a thing in all seriousness?

A few hundred meters further lies the so-called "canapé ", a better name obviously did not occur to the historians either. The shape may remind you of this from afar, but even as a simple waiting and viewing bench, this structure, completely formed out of the rock, was certainly not intended for entertaining moments due to its dimensions and curvatures alone. 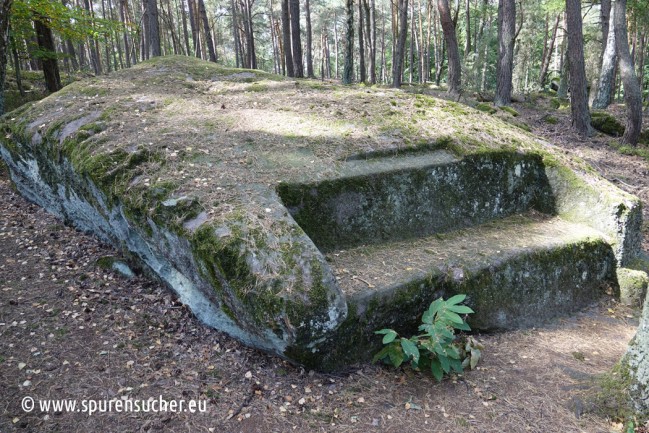 Simple seating with a view? Taken in isolation, the so-called "canapé" was intended for higher things from my point of view. 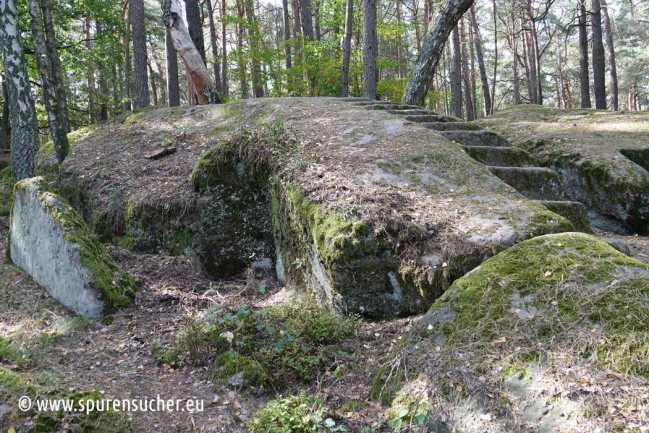 Right next to it there is a rocky ascent with steps that practically end in nothingness. Surely it was a place of power that was once used for other purposes. The exact 11 steps could indicate initiation rites that are much older than those of Mithraism. To the Roman initiation cult belong anyhow only 7 steps ... Perhaps I am also completely wrong, the adjacent "canapé" was perhaps no seat for high priests, but part of a more complex arrangement for completely different purposes. The monoliths of Asuka Nara (Japan) remind me of that. The " canapé " is from my point of view more than just a seat... 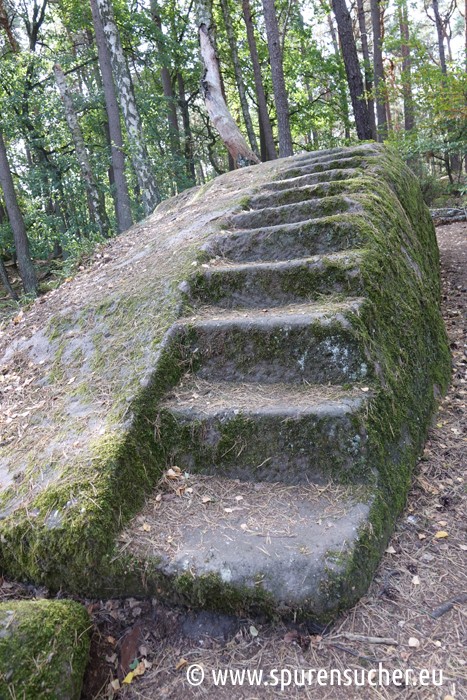 If you take a closer look you will notice that more worked rocks disappear under the leaves and the earth and you certainly do everything you can to keep it that way. One also senses cavities under the earth. Between the two big rocks the ground bounces a little. In any case, nothing has been seriously researched here scientifically. Instead, the place is sold as a medieval hermitage (which maybe it was much later): Allegedly inhabited since the place between the 14th and 16th century. The citizens of Leistadt had to bring up the catering for the hermit.
The place is on about 445 height in slope situation and is with it already quite far above in the proximity of the summit. If there were no trees in front of it that are not very old anyway, one would probably have an excellent view into the valley or over the plains.

The so-called "soup bowl" is located a little in front of the village. The square border with a flattened edge or double edge on one side is conspicuous. This was certainly not originally intended as a drink container, even though many people think of the typical sacrificial basin at first glance. The ideas go from model pyramid (without keystone), Celtic cross base to container version. Also edgings for statues would be conceivable ... of it there are enough examples in India. I am grateful for further suggestions. Laterally interesting petroglyphs can be found, which were probably engraved there much later after the completion of this structure (at least a part of it - as the number 1826 proves). 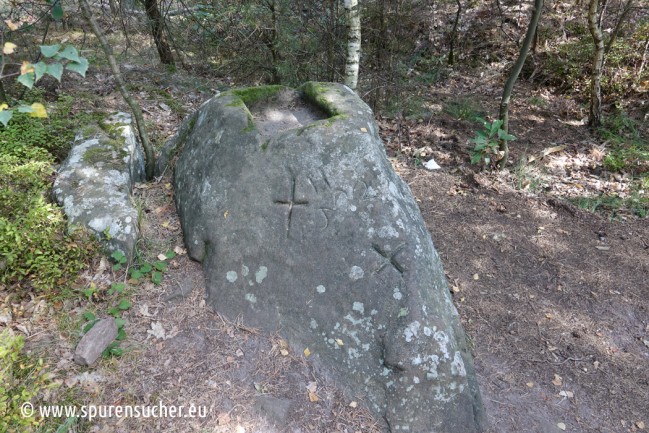 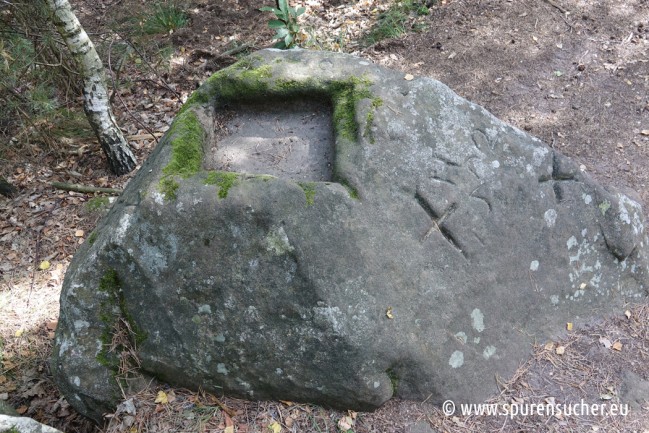 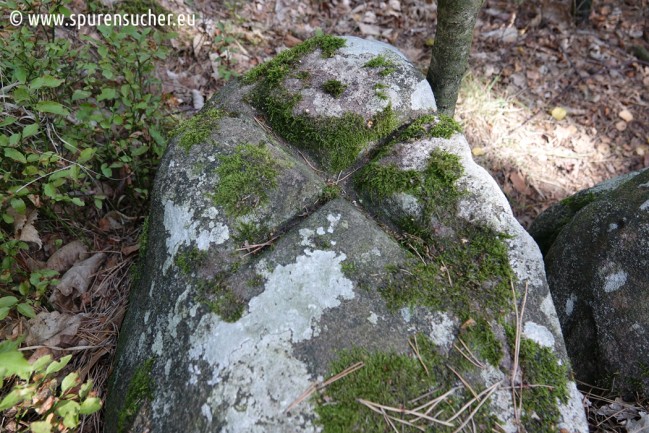 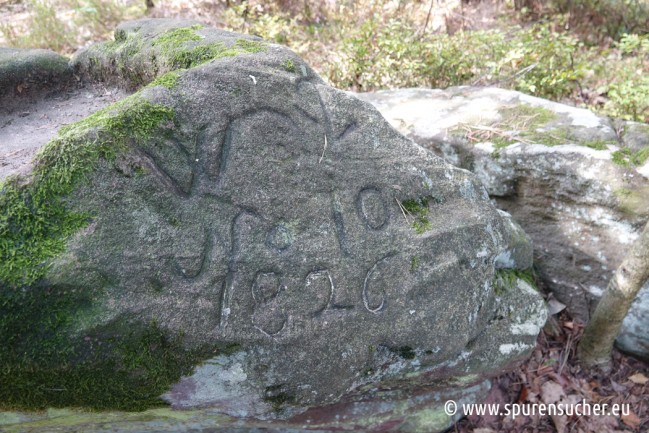 The Leiningen boundary stone of the Count of Leiningen-Hardenburg from 1595 is located directly at the "Suppenschüssel". 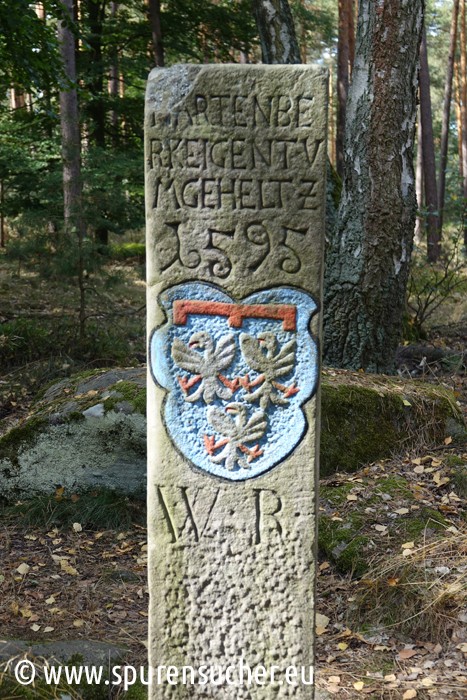 You also want to visit the place once? I can recommend the approximately 9 km long hiking trail with a clear conscience. Tell me about your discoveries.