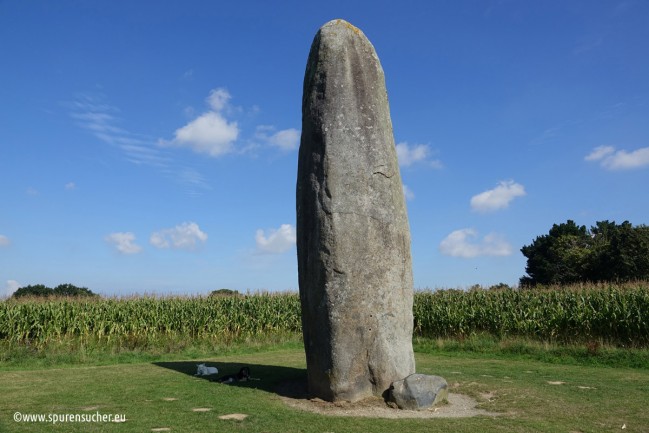 We are still seriously told that this granite menhir, which is about 9.50-10 metres high and has an estimated weight of 150 tons, was rolled on tree trunks from the village at least 4 km away. Even if there were display boards with pictures of wheelbarrows, the normal tourist would not find anything wrong with it. Not even if Obelix was shown casually balancing the menhir on his back. This is the Menhir du Champ-Dolent, in the north-east of Brittany.

"It should be noted that this granite is found just over three quarters of a mile from the town, on Mont-Dol, a hill surrounded by marshes, which was probably once an island. The stone of Champ-Dolent rests on a quartz rock in which it sinks several metres deep. By what mechanism were the Gauls, who in our opinion are so little advanced in the arts, able to transport a mass of granite that was forty feet long and eight feet thick? How did they build it? "
... writes Stendhal, Memoiren eines Touristen, II, 1854, pp. 50-51. 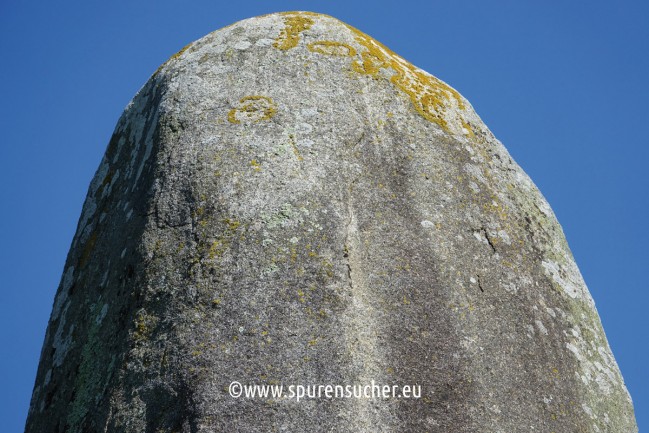 Bellied in the middle, further up the menhir looks as if it had been stripped off in streaks. 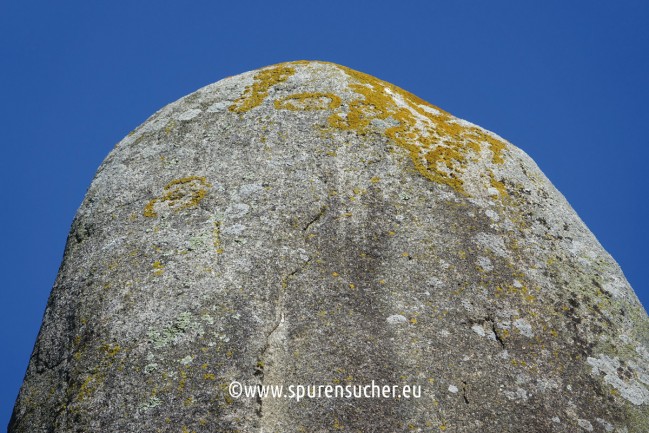 The menhir was placed at a point overlooking the marsh of Dol at about 30 metres above sea level, at the junction of the Tertre Bintin stream (to the west) and another unnamed stream (to the east). It is a cone-shaped monolith of small-grained red granite that was mined at a site more than 4 km away. The visitor is not told about the swamp, the moorland and the island, as otherwise the log-roll theory would sink anyway. If it comes from Mt Dol, the distance (as the crow flies) is more likely to be 6-8 km.

Scars and dents - Over the millennia, the menhir has had to endure a lot. 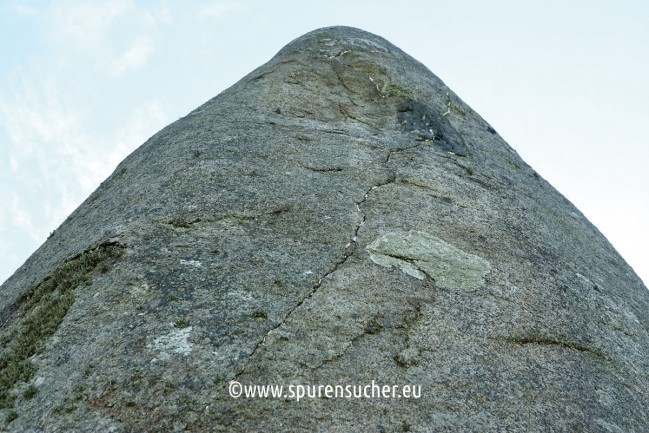 The Menhir du Champ-Dolent, like so many of his "colleagues", was defiled with a cross on its top in the 19th century. Had it not been desecrated, it would have been even worse and it would have been destroyed in the course of Christianisation. Obviously they wanted to save themselves the work. Its basic circumference is 7 metres. At a height of 2.50 metres the menhir is more "bulbous" and even measures 8.70 metres. In the lower part it seems almost square. 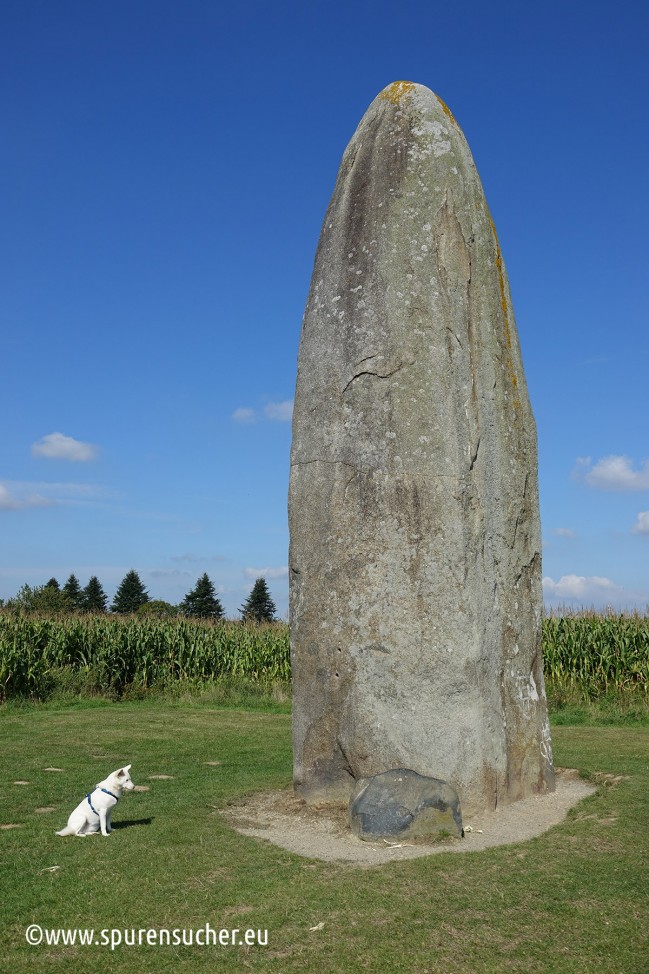 At the foot of the menhir, a smaller stone protrudes from the ground made of entirely different hard rock.

According to popular belief, the menhir is believed to sink gradually into the earth and on the day of its disappearance the hour of judgment is approaching. In fact, I believe that there are several meters below the surface of the earth, and that various "cultural layers" (a rarely stupid term) provide stability here.

Drillings, inscriptions, dents - many a person has already worked their way around this colossus. 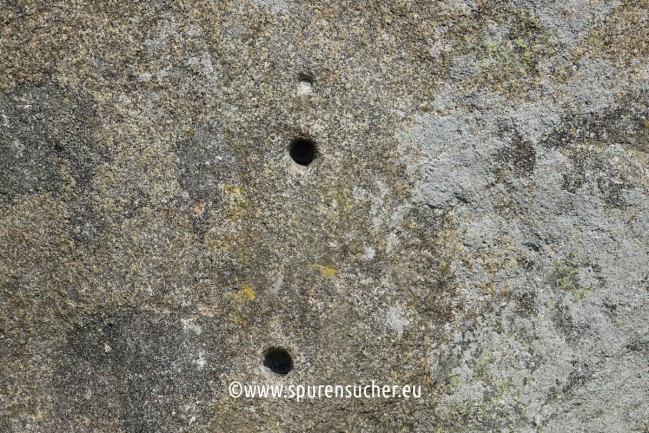 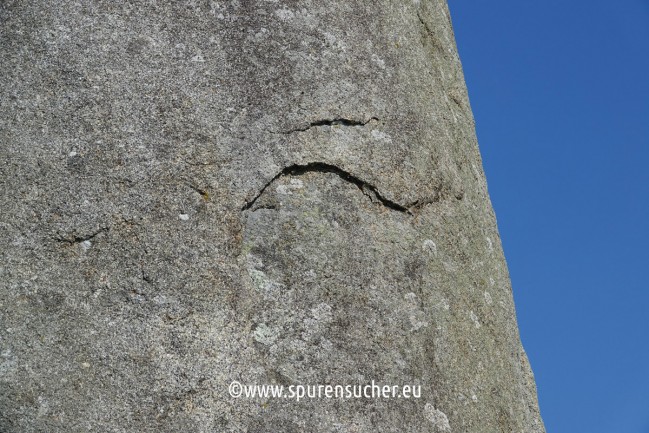 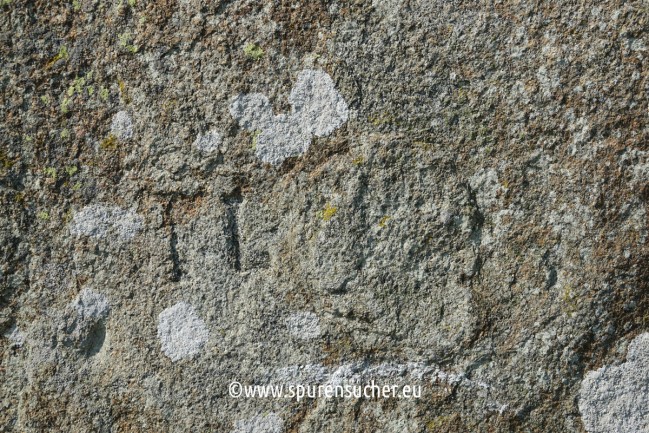 Champ Dolent means "field of pain". It is conceivable that a battle may have taken place here at some point. Another legend reminds of two brothers and their respective armies, who declared war on each other. They were fighting a devastating and bloody battle near Dol-de-Bretagne when suddenly the menhir shot out of the ground to separate them: Another tale claims that the stone fell from the sky.
It is possible that the menhir, which is considered one of the largest in Brittany, has been standing there for much longer. Perhaps long before any battles were fought there.

Menhir with Christian desecration, at least this is how it looked like in the 19th century. 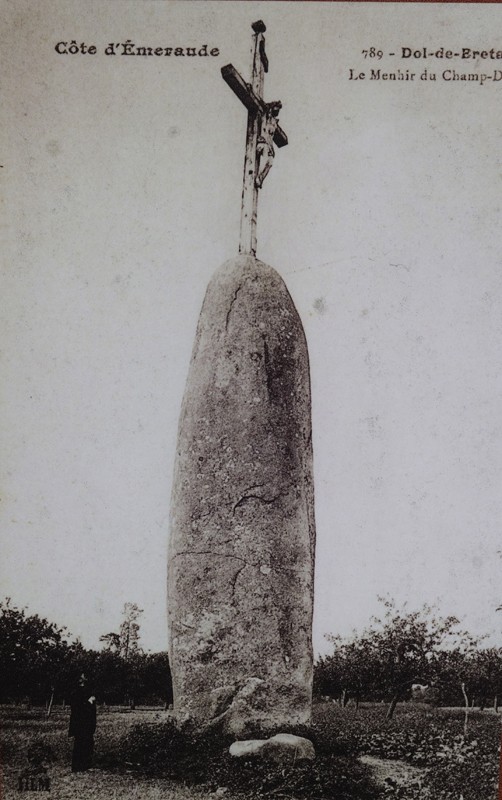 It is assumed that a stone wedge in the ground is responsible for the stable position of the menhir, another constructive detail that protrudes from the ground. Originally this visible detail was thought to be a sacrificial stone. I am not sure whether this wedging was actually intended to be done in this way. To me it seems too small, moreover it is made of a completely different material (basaltic dolerite) than the menhir.

Parts of a more complex site have been excavated in the nearer surroundings anyway. Whether we have already seen everything here or whether we are really being told everything is highly doubtful.