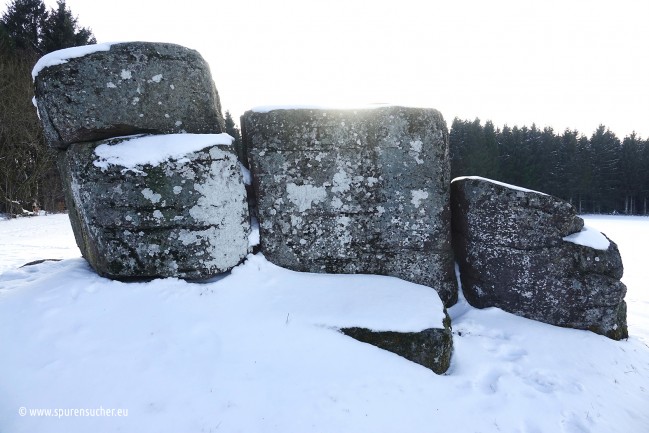 There, where the compass needle points north with every turn of the body, one feels abandoned by all good spirits. This is the case at the Ketzerstein near Liebenscheid-Weißenberg …

The Ketzerstein is an approximately 610 meter high mountain in the Westerwald (Germany), in a large hiking area between Dillenburg and Bad Marienberg. On its summit there is a solitary group of basalt blocks, which was undoubtedly worked on. How it got there cannot be said exactly from my point of view. By the way, science is firmly convinced that it is the visible remainder of a lava flow. One concludes one's results from the circumstance of the vertical column alignment with the horizontal fissures. Basalt columns exist in spectacular form in numerous places around the world, but they do not look like Giant's Causeway or Devil's Rock, where they often appear in hexagonal column form. From my point of view, the symmetry, the parallelism and the diameter of the blocks are much larger are missing. Their absolute isolation on the top of the mountain should also be worth thinking about. 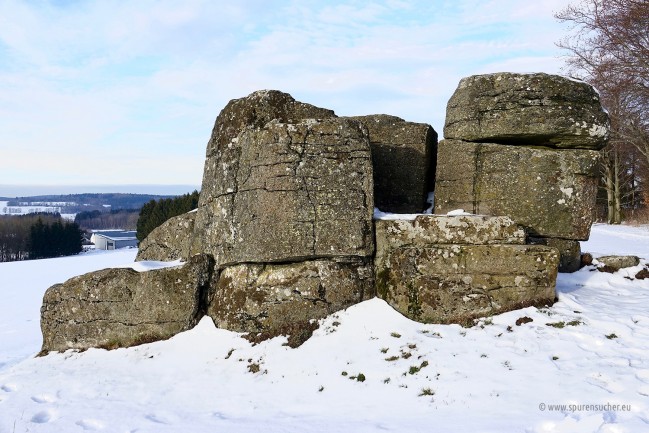 Isolated location and striking contrast in the winter landscape: even if one can only guess how they got there - they were definitely worked on.

Moreover, one must always bear in mind that these are unproven scientific theories if one looks at the irrefutable self-confidence with which science argues. Lava flows in this form and strength have not yet been observed anywhere. Try to find a film about the formation of such rocks in these forms via lava flows. I guess you won't find much here. Especially when science argues that this is invisible underground, the whole thing remains a theory. We should get used to questioning such thought games, even if we ourselves can only speculate how something like this came about. 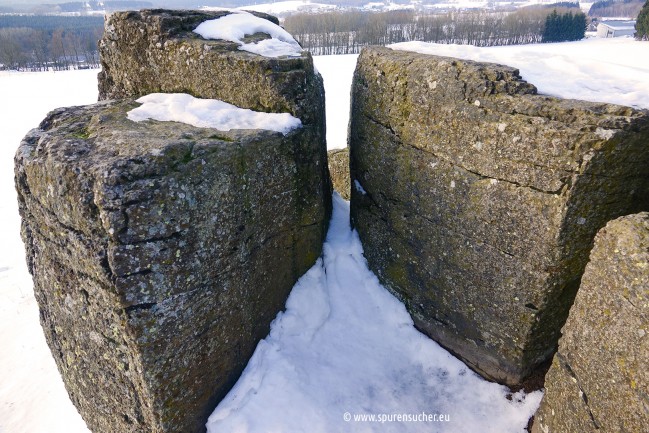 "Set right" or broken apart by erosion? If this material is supposed to have been an entire block, however, very wide fissures have opened up. Basalt is an extremely hard rock which requires considerable external influences for such distances in order to divide.

Personally, I am not certain - as far as the formation of these boulders is concerned - but I am absolutely certain that here (at least in part) a hand has been applied subsequently to bring them into the particular shape. 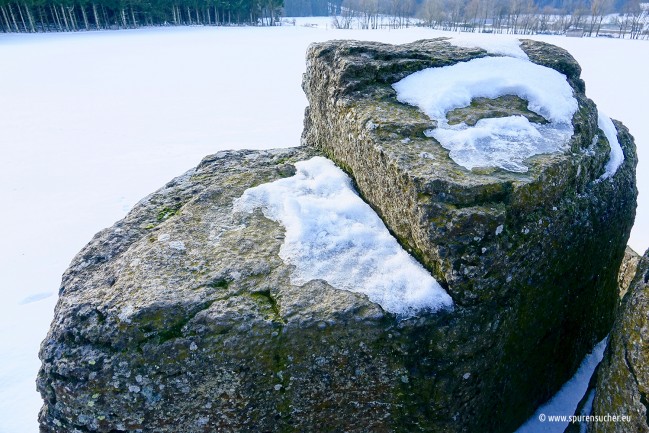 A piece of cake that at the same time resembles a boat. No clear tear-off edges reminding of a former connection with the other blocks. The staircases are rather firm and evenly curved; at least it seems so. 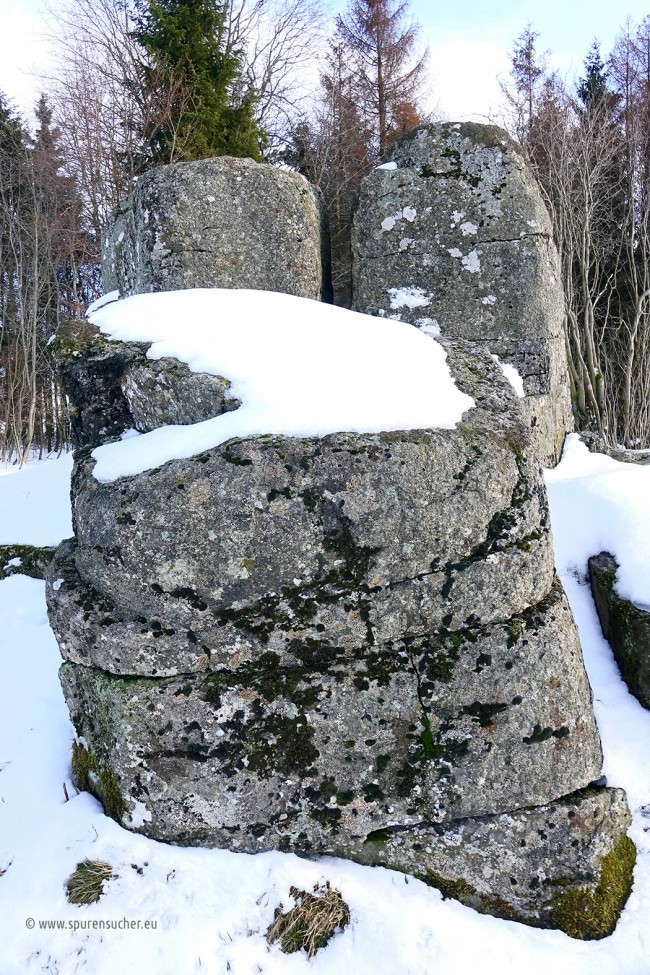 Curved arches and symmetrical "columns" - all a freak of nature? 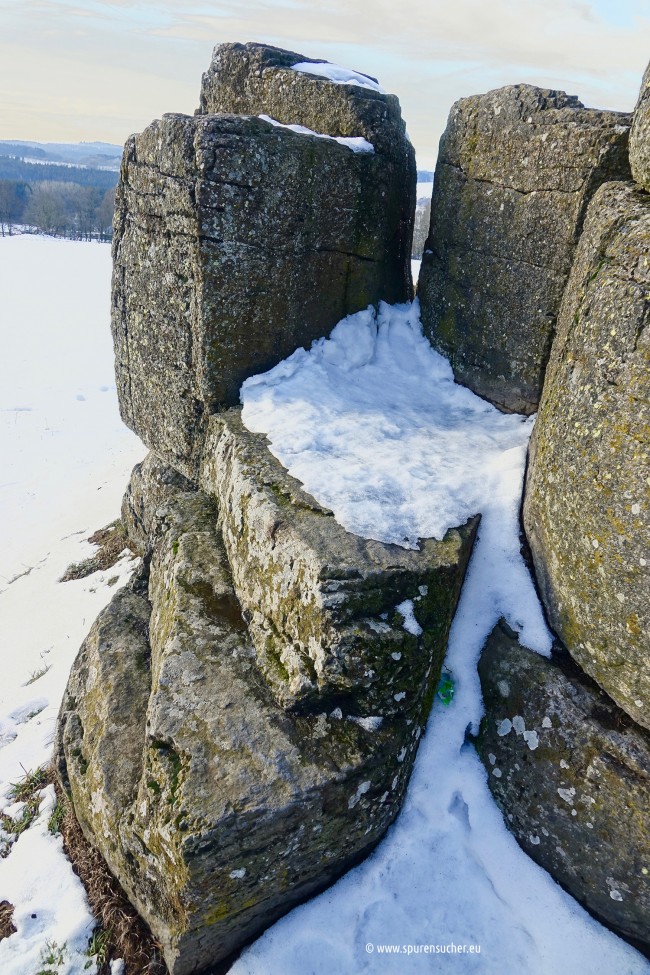 Clearly visible steps to the centre of the ensemble. The techniques used to make them are of secondary importance. No bold fantasy is required to become aware of this special feature. At the top it is like a pedestal. From there you have a fantastic view over the landscape.

The high content of magnetic iron-titanium ore (ilmenite) is supposed to be the main reason why the compass needle permanently points north at this point. My personal question: Is such a small number of rocks sufficient for something like this? So far, I've only known cases where this happens when you're in the bottom of a basalt quarry. In such a case I would be surrounded by demolition walls and would certainly also have basalt with a corresponding proportion of magnetite.
But what does it look like on a mountain peak with only a few rocks lying on it? Is that enough for a complete disorientation?

Make your own judgement and visit this place surrounded by expanse and peace.