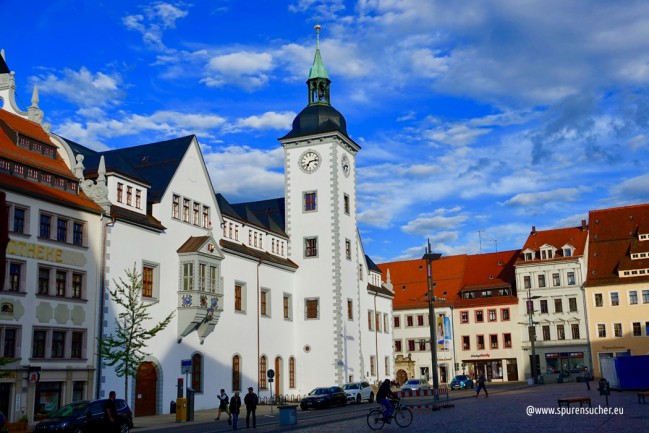 The small town of Freiberg is not only extremely idyllic, but also almost 1,000 years old. The buildings were apparently largely undamaged by the world wars.

A short professional stay nearby allowed me to visit the "Bergstadt" Freiberg in Central Saxony. As soon as we are dealing with mining activities or raw material deposits, science speaks of "Bergstadt". Close to the university and silver town or only a few 100 meters away from the old town is the silver mine entrance 'Reiche Zeche'. The city itself is crossed by a 30 km large underground tunnel area. The road network is supposed to cover about 2,000 km. Over 8,000 tons of silver have been mined there to this day. Therefore the title "silver city" - one speaks of one of the largest silver mining areas in Europe. On request, visitors can be given underground guided tours, but only to a very limited extent compared to this huge area.

During my excursion through the worth seeing old town I also passed the cathedral area with adjoining large buildings, including the city and mining museum. At this time it had already closed and was not supposed to open before 10 am the next day, which unfortunately did not suit me. Nevertheless, I saw numerous construction sites around one of these buildings, which is later called "Am Dom 1" after my research. At one of the building sides of the obviously old building it probably came to excavations and I saw below the street edge in a depth of approx. 4 meters an excavator, which was obviously involved in the uncovering of the foundation around the building. 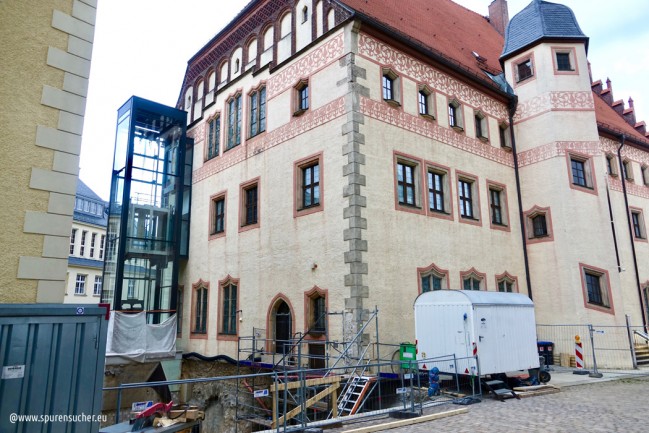 Here is the entire intermediate section between "Am Dom 1" and "Am Dom 2", which offers space for a new building. The ground has been removed for the new foundation.

I immediately noticed from the corner of my eye that something ancient was appearing here, which in no way corresponds visually with the façade of the building above. I also noticed that I couldn't find a sign indicating that this was an archaeological site. Instead, one could see that a door underneath a window must have been half below the surface of the earth and that there were about 1.00 to 1.50 metres underneath 2 adjoining archways in the ground. The left one was obviously already filled with cement, the right one has to expect the whole thing. After a cellar access the two giant holes don't look to me anyway. On the also excavated opposite side "Am Dom 2" there was no counterpart to the building "Am Dom 1", which leads me to conclude that it could not have been underground connecting tunnels between two buildings. At least there were no connections or any other signs. 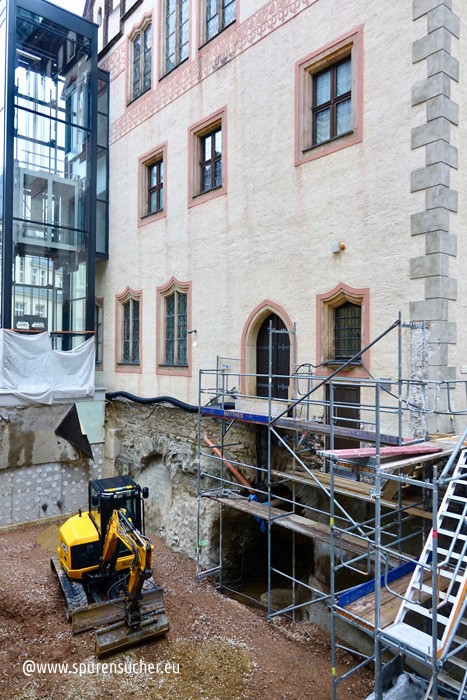 The excavated soil brings to light interesting building structures, which at least nobody wants to talk rhyme with in public.

I thought it was a bit odd that there were no signs here to clarify what was going on.
Not even what the excavation in general is all about. At home I did some research:
The Freiberg City and Mining Museum - as we learn from Wikipedia - is located on the site of the former canon's court, a late Gothic secular building. In a homeland blog I read: "... the museum building belonged to the complex of cathedral canons' houses, which were built towards the end of the 15th century and housed the municipal Latin school after the Reformation. This institution developed into a grammar school, which then had its seat in these ancient houses until 1875. Today, the buildings are used by the Town and Mining Museum."

In 2002 it was said that during renovation work very old woods were found in the roof truss. Dendrochronological investigations have shown that the trees were cut in 1488. The roof truss is thus the oldest preserved roof truss in Saxony. That fits apparently quite well, since the building with the designation "Am Dom 1" corresponds also documentarily with the building in this time.
In 2002 it was further said: "The foundation of an angular tower had a round form. Nobody can explain this exactly today, but it is assumed that there was another part of the building instead of the tower. Now a cement shell was blinded to this foundation."
The original building would have to be much older anyway, since a fire allegedly took place in the building in 1484, which led to its reconstruction. At least, this hint made me wonder. 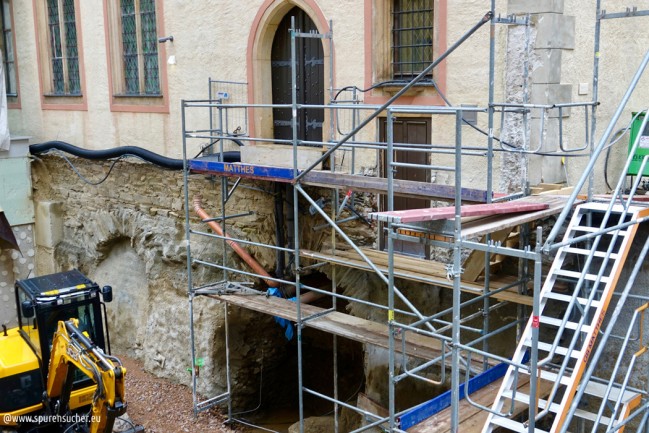 So what are we dealing with here? Former entrances to the Silver Tunnel System? Possible, but not very likely. For this one would certainly not have chosen such high passages. And then also 2 parallel runs? I couldn't resist the thought that we might be dealing with something else here. Numerous buildings - some of which I found on my way back to the hotel - have ground level round arched entrances to inner courtyards. But here, the focus is on "inner courtyards" and not "inner cellars". So is it possible that this section of the building once stood one floor higher or - to put it the other way round: the present soil was not there at the time when the foundation stone was laid at today's height? Now the question arises, if there is something to this theory: Did one intentionally bury the former ground floor or did it come here to an earth flooding (keyword: Mudflood)? How is it that people here keep curious people at a distance and no other explanations are offered? 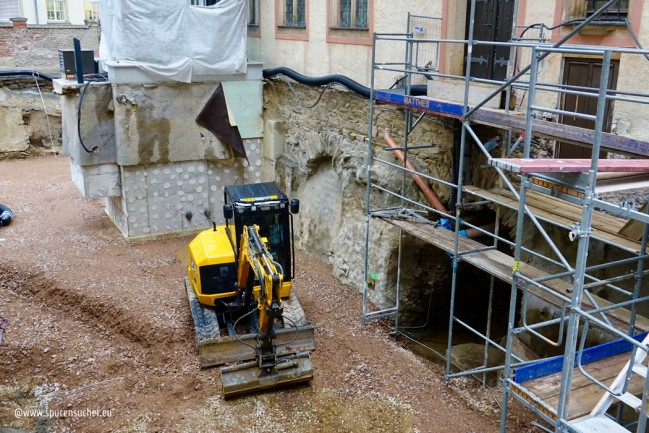 The modern glass elevator was stabilized, on the top right you can clearly see the upper edge of the former earth up to the plaster. The half door behind the scaffold was probably reachable by a step downwards. The left archway has already been filled with cement, presumably to maintain the stability of the building. 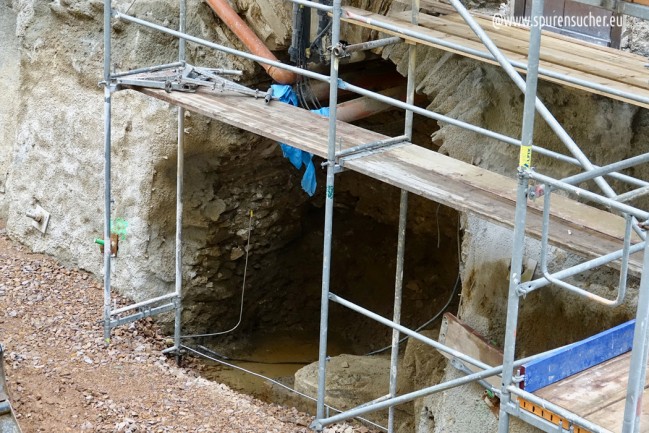 The right round arch has not yet been filled with cement. Where does it lead to?

For my part, I would be very interested in examining the old buildings in the basement from the inside to see if there are any bricked-up windows left. This is always an unmistakable indication that cataclysmic events may have occurred in such cases, perhaps because the ground floor was once buried by earth masses. According to the usual "cultural layers", which archaeologists like to mention without further explanation, the whole thing doesn't look like it to me. However, I don't want to exclude the possibility that there were connections to the cited tunnel system. But why is no more detailed explanation offered here? In addition, the tunnels have a depth of 150 metres, even if they run below the city area. Also, they should have been vertical shafts. The fact that the building is older than the first documentary mention of the "Himmelfahrt-Fundgrube" (1715) speaks against this … Chronicle. I could only investigate the flooding of the "Freiberger Mulde" for the years 1897 and 2013. 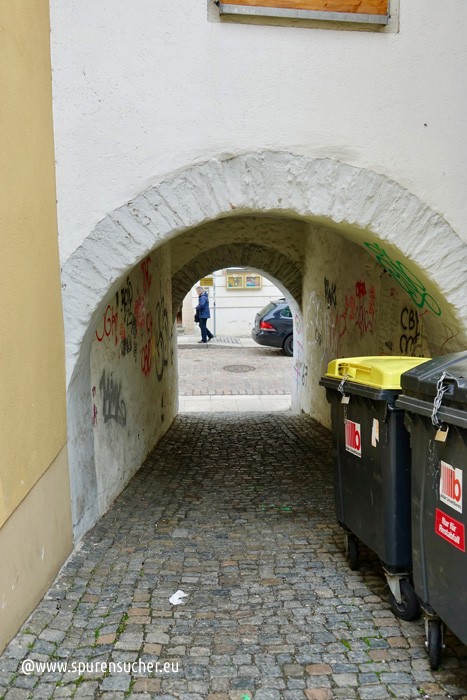 Building underpasses with round arches are no exceptions in Freiberg. If the area of the exposed round arch on the construction site had once been the ground floor, this building structure could possibly have been explained. 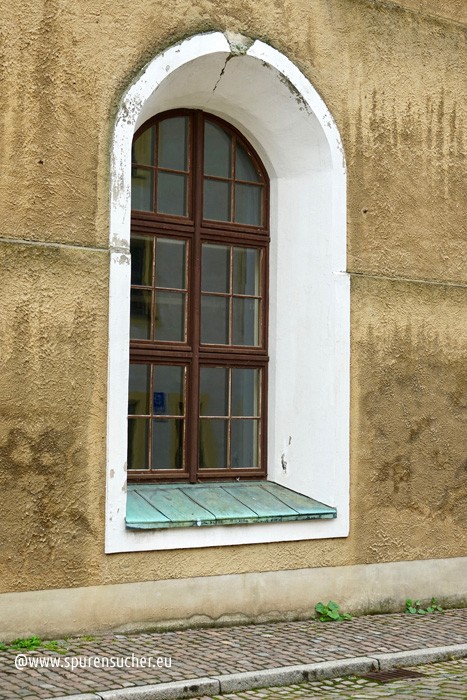 The townscape is also characterized in places by low-lying window sections, such as here at the Petrikirche.

In the same part of the town, which is remarkably high, there are further window sections of residential buildings, which are just above the street surface. When the different buildings were built, the street was certainly at a much lower level. So how did the fillings come about? If you have any further information, I would be happy to hear from you. 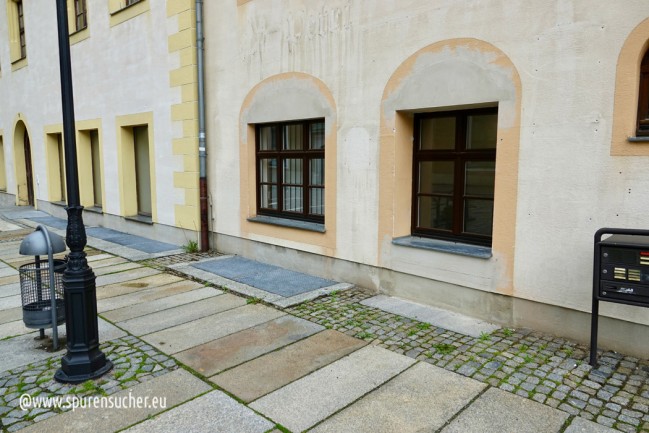 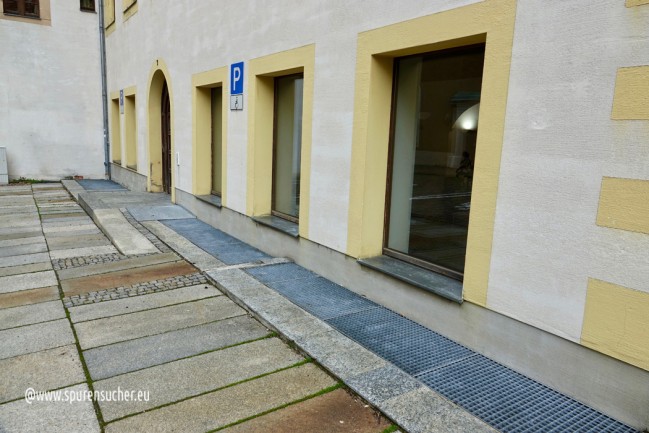 The new director of the "Stadt- und Bergbaumuseum" did not comment on it in the press, at least not after my research. Between the excavated cathedral buildings 1+2 a new building is to be built (gap closure). A tribute to the exposed older building structure: no chance! If one considers, with which accuracy one removes otherwise in such cases the soil and examines... Here in any case one would like to create probably only a new entrance situation, just a purely structural measure (source). In the official gazette of the city Freiberg it says that the so-called silver gate is to be established there. This is probably an ultramodern metal construction, which looks like a sectarian building pressed into it from afar in its planning view and corresponds to the romantic-age cityscape in about the same way as fire ruins in villa areas (source PDF page 4 with plan view). But this is obviously a matter of taste of the city fathers ...