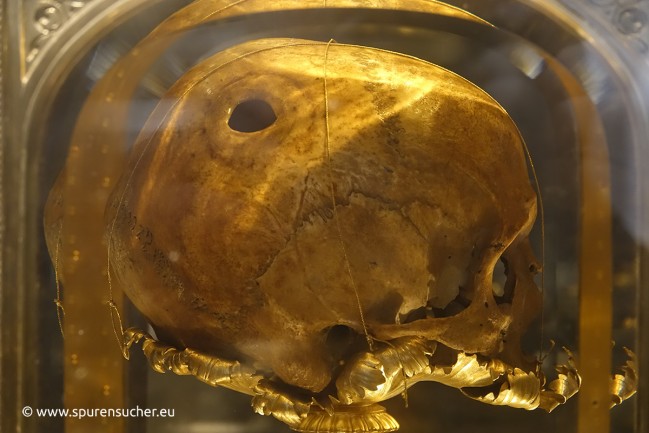 What is a skull doing in a monstrance, I asked myself when I saw the thing. It is proudly presented to us in the display window of the reliquary of the Saint-Gervais Basilica in Avranches. According to legend, it was that of Bishop Aubert, who was the head of the church during the reign of King Childebert III. (695-711) was head of the Avranchine episcopate.

Aubert dreamt three times of an archangel who ordered him to consecrate a sanctuary on the summit of Mount Tombe (today it is the world-famous Mt. Saint Michel). The man hesitates for fear of being the plaything of an illusion of evil, but is "convinced" in the end by the third apparition of the archangel. The archangel preaches a sermon to the bishop and repeats Heaven's command; this time literally "forcefully": his angelic finger administers a deep scar on the cleric's head and a hole on the right back of his skull. After this third apparition, Saint Aubert hesitated no longer and set to work. Obviously well ventilated mentally ... 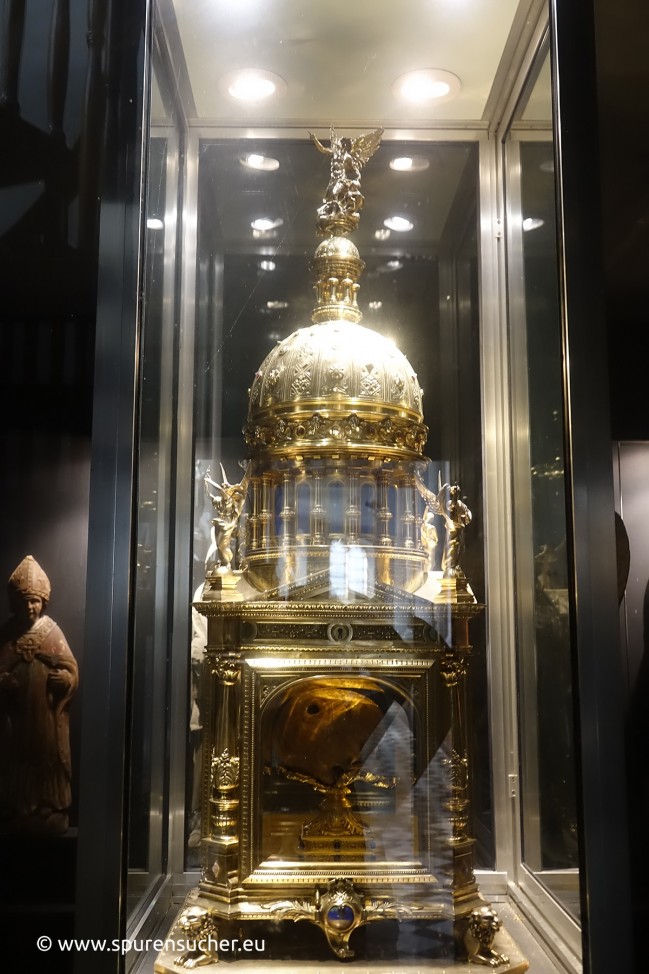 The legend of the construction of Mont Saint-Michel:

Aubert slept on his two ears in a bed,
when Saint Michael came in his dreams and said to him:
"Build me a temple on Mont Tombe.
And do it quickly! Tomorrow! First thing in the morning!

In the morning Aubert thought it was an old nightmare,
...for it was difficult to build on this pond.
The villain must have been up to no good,
No way to obey to break his neck!

On the third night, Aubert listened:
The finger of St Michael had removed his doubts.
It was time for him to do his biblical duty!

Aubert built and the mountain grew like a flower,
The abbot even resisted this terrible work.
His pierced skull is now a holy relic.

The church always has an old wives' tale of some kind to offer, and the exhibitionism of mortal remains is given top priority. Since this relic is not kept in some subterranean cellar vault, but is the first thing to be seen there in the "treasure room", they obviously like to rely on morbid powers of attraction - not least in order to have the collection box filled at the same time.

Over time, there were several "hole" investigations that allegedly confirmed via carbon 14 dating (carbon 14 can be detected as a substance up to 5,000 years old) that the age of the skull of Saint Aubert, the presumed founder of the abbey of Mont-Saint-Michel, corresponded to the period of his life. The "established" dating period is between 662 and 770, which is already a less than concrete indication. However, it is still completely unclear how the hole got in there and whether the skull can thus automatically be assigned to this bishop. From epidermoid cysts (a cyst that eats through bones) to trepanning (medieval drilling), the origin of the hole has been subject to all kinds of conjecture. 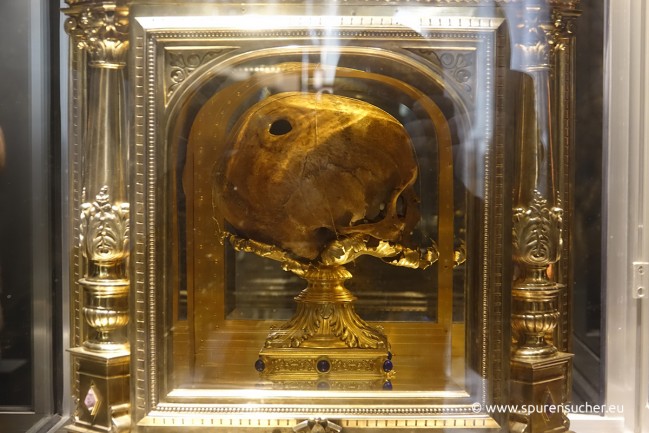 Well, someone/what is probably responsible for the hole in the head as well as the first building on the island ("burial mound" Mt. Tombe - original name of Mt. St. Michel). Whether the two have any connection is highly questionable and sounds above all like an excellent story that the church probably circulated at some point. The hole must have caused quite a stir among pilgrims as early as the 8th century, who flocked there in droves. If only because they believed in the fairytale of the divine wound. So what could be more obvious than to also fabricate that the good Aubert would have created the foundation stone for the later gigantic monument. If he had done it with his bare hands alone, it would certainly have been bought from the church at the time (even if only as a sanctuary for the time being).