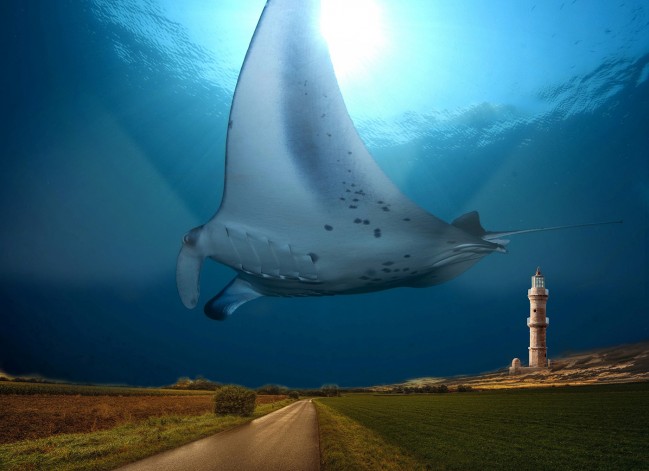 Recently I repeatedly stumble across unexpected sightings of flying rays in the USA and wonder if these phenomena occur even outside the country of "unlimited possibilities". But first I would like to tell you about some of these cases.

In the book "Phantoms and Monsters: Strange Sightings" Lon Stickler reports about a case from Jordan, Minnesota. The witness drove through the small town at about 3:40 at night when he saw a white stingray animal flying at a speed of 50 km/h at about 1.50 meters above the ground, about 2 meters from his car. The anonymous letter says that the movement resembled a swimming movement. But not at such a high speed that the witness could not have taken a closer look. He described the colour of the being as a dirty white that turns grey. However, he was self-critical that this colouring could also have been falsified by the artificial spotlight. The size of the being: About 1.50 meters wide, up to 1 meter long. In addition, he noticed a bulge on the underside of the belly, almost exactly in the middle. He assumed that this bulge was about 15 cm thick. He could not see a head, but concentrated more on the "wings". He explained that he knew many species of wild animals, but had never seen anything like it in the air. River rays were well known to him because the witness had spent many hours watching them before. So the topic "cartilaginous fish" was not completely unknown to him. He also noticed that the olfactory creature had no feathers, but looked as if it was wearing a thin layer of fur "like a short-haired dog".

I particularly remembered that the witness had already been extensively involved with river rays. Was his sighting now an illusionary manifestation? Below is a picture of a freshwater stingray. 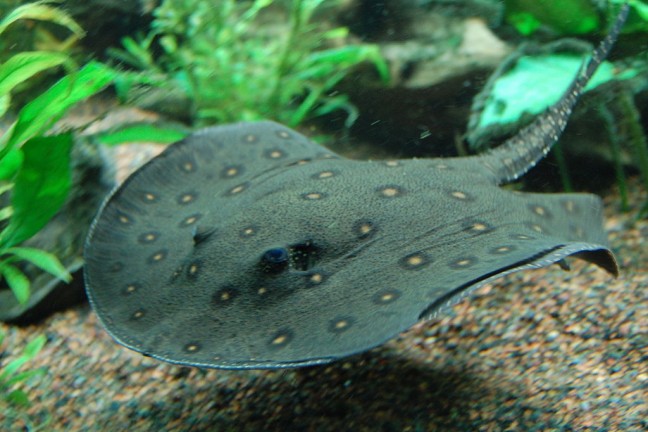 This is the place of sighting: Jordan/Minnesota.

"It looked like it was swimming, but it flew."

The same book also reports on a case in Laredo, Texas. About 1,400 miles further south from the sighting site described above, another witness describes a similar phenomenon. Again, it was a stingray in a similar color. This driver also described it as grey-white. It came from the direction of a lake not far from a golf course. Apparently it was Lake Casa Blanca, a reservoir that had existed since the 1950s. The similarity of the description makes me a little suspicious: The creature was estimated as 1 meter wide ("probably somewhat larger") and was observed by the witness for about 10 seconds. Quote: "It looked as if it was swimming, but it flew". A swimming movement in flight mode is truly something "strange". The witness saw the creature around noon - it was about 10 meters from the vehicle. Where it flew to and why he could observe it only 10 seconds despite this bright time of day, he does not tell us.

This is the place of sighting: Laredo/Texas.

If one goes on the search, one realizes that the phenomenon of flying rays was also examined and/or investigated by numerous other crypto researchers. Thus the honourable Linda S. Godfrey writes in her book "American Monsters: A History of Monster Lore, Legends, and Sightings in America" that such sightings go back at least to the early 2000s. She speaks of a case in January 2012, when on a highway near Hebron, Kentucky, a 60-70 cm wide ray crossed the road and also swam in the air. Witness was a teenager passenger in a vehicle.

Two witnesses near the Ohio River in 2004, in the early evening hours, saw a similar being in the same color as described above. Interestingly, they say, "His silhouette was reflected in the windshield and then suddenly disappeared on the left side. It didn't fly out of sight, it was just gone. That went very quickly, but since I am a visual artist, it burned itself into my memory" (Witness's quote). However, this flying exemplar was much wider, because it apparently measured the size of the vehicle of the two travellers. The span is said to have corresponded to the width of the road. In addition, it is claimed that it was nearly transparent. Special body features such as facial features, head or limbs could not be detected during this sighting. All features pointed to a ray, possibly a manta ray. The witnesses were absolutely sure that it was not a bird.

Was there even a flying manta ray involved? The measurements at least would correspond to the description. 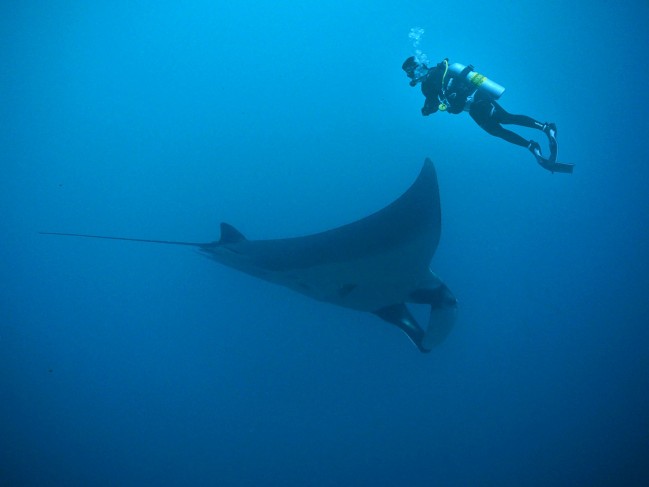 Picture by Elias Sch. on Pixabay

While the other eyewitnesses did not comment on the emergence or disappearance of these flying creatures, the Ohio sighting is remarkable in that the sudden disappearance as well as the transparency of the described creature is more like a paranormal event. Perhaps this phenomenon can also be transferred to the other cases.

We know that devil rays are able to "take off" up to 2 meters above the sea surface for seconds due to their physiognomy. But on land? This becomes too much even for the most hardened crypto researchers. Why even the devil rays jump out of their element at all has not yet been finally clarified.

More recently, sightings have also taken place in Spain. The portal "Cryptozoology news " reported that an older Spaniard could also observe a flying ray near Almeria (between Alicante and Malaga). The sighting is said to have taken only 5 seconds: It flew over the road around midnight in June, straight line about 5 meters above the ground. Also the length of this flight should have amounted to about 2.50 - 3.00 meters.
The 68-year-old man, who gave his full name but asked to remain anonymous, told "Cryptozoology News" that he left for home at 00:00 on 27 June (presumably 2018) when the event took place.
He described the being as black and added: "The wings were as long as the body and ran from neck to end and were tapered. It was kind of like bat wings, but more like fluttering manta rays". (>> Source) Apart from the narrow "wings" he could not see any other extremities.

Provo is a small town in Utah (USA), south of Salt Lake City. Danny B. Stewart, who also offers mystery tours (>> Source), reports sightings and testimonies from the area, some of which date back 11 years. In his article "The Giant Flying Manta-Ray of Provo Utah" (>> Source) he reports about a witness who claims that she saw a "gigantic black manta ray" flying over Provo after 22 o'clock. Quote: "This thing was about 130 meters in the air, came from the southeast and flew northwest. It had a wingspan of 4.50 meters and its body and tail were probably 8 meters long. He flew directly above the Provo City Center Temple and finally disappeared into the night sky."
On one of his tours, another witness casually told him that he had only recently seen something like a manta ray climbing on the side of the old tower of the Utah Valley Regional Medical Center. He is said to have been tall and black and climbed to the side of the building like a bat on the side of a barn door. Then he climbed to the top of the tower, disengaged and disappeared into the night in a northwesterly direction.

Whether such sightings are authentic or not may be answered by each one himself. If they were experienced with a clear or awake mind, it would first have to be clarified what they might have been confused with: Kites, flying machines? None of this really seems to fit into the context. At the end of the day, credibility is the only thing that always comes to the foreground. Of course, hearsay is always such a thing. But since the similarities of such sightings are increasing, one cannot possibly push them aside as absurd. In any case, I stick to such interesting experiences. What about you? From fata morgana, dimensional leaps or even mistakes in the matrix, everything is in such narratives once again. In this context I would like to refer you again to my article About creatures that vanish into thin air: Do cryptides via portals visit us?