Dr. Jarl and how Tibetan monks made rocks float 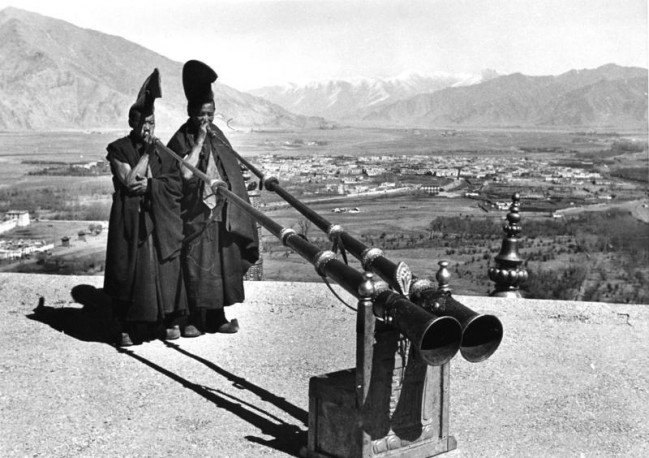 The world today uses the power of artificial intelligence and other technologies (especially electromagnetics) to make large and small objects float. Whether these have been exploited to achieve a desired result in this direction is unknown to us and, as usual, is likely to be reserved for the military-industrial secret complex. Apparently, however, for centuries - if not for millennia - there has been another way of levitating objects, which was used by Tibetan monks for several more years. An acoustic method is used for this. Acoustic levitation is the result of a sound technology or sound application to make objects float. A Swedish doctor, Dr. Jarl, found out that it could also be used to levitate large rocks.

Hovering with the help of acoustics has allegedly already been put into practice by many people and organizations, including NASA (see below). NASA used this method to conduct anti-gravity experiments, and Chinese scientists used the same method to levitate small animals in 2006 (probably much earlier). But what is the difference between the levitation of rocks by Tibetan monks and how it works today, and what does science say about it?

Deak writes about his film: "This is an acoustic levitation chamber that I designed and built in 1987 as a microgravity experiment for NASA-related subjects. The 12-inch cube-shaped Helmholtz resonance cavity made of Plexiglas has 3 loudspeakers attached to the cube with acoustic waveguides made of aluminium.
By using a continuous resonant (600 Hertz) sound wave and by adjusting the amplitude and phase relationship between the 3 loudspeakers, I was able to control the levitation and movement in all 3 (x,y,z) axes of the surrounding space.
This research was used to show the effects of the microgravity conditions that exist in the environment of the Space Shuttle in orbit, but were carried out here on Earth in a laboratory".

The preparation of a "lifting platform"

It is assumed that floating has been triggered by acoustics for ages. There are a number of theories that assume that humans used the technology of floating rocks to build pyramids and create large megalithic complexes. Tibetan monks have already levitated large rocks under witnesses using an acoustic levitation method. 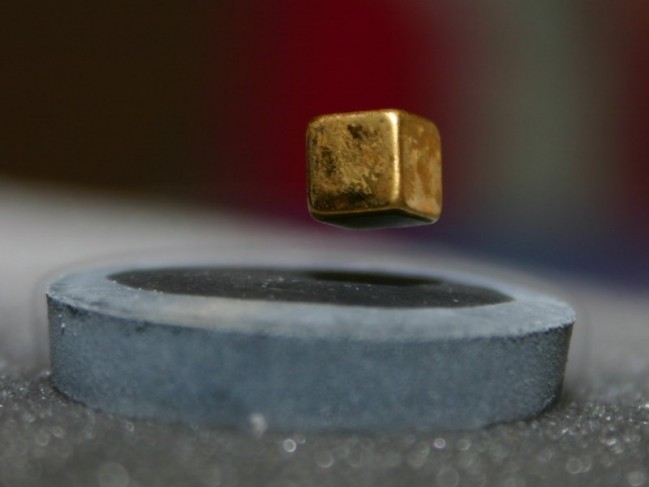 The following article is said to have appeared in a German magazine (also mentioned in The Bridge to Infinity By Bruce Cathie /1984 and Anti-gravity and the World Grid by David Hatcher Childress, his book is from 1987):

"We know from the priests of the Far East that they were able to lift heavy stones to high mountains with the help of various sounds. The knowledge of the different vibrations in the audible range shows the scientist that a vibrating and compressed sound field can cancel out gravity. The Swedish engineer Olaf Alexanderson wrote about this phenomenon in the publication Implosion No. 13.
The following report presents observations that were made in Tibet in the 1930s. I have this report from civil engineer and flight manager Henry Kjelson, a friend of mine. He later adopted this report in his book, The Lost Techniques.

The Swedish doctor Dr Jarl, a friend of Kjelson's, studied at Oxford. During this time he became friends with a young Tibetan student. Some years later, in 1939, Dr. Jarl travelled to Egypt for the English Scientific Society. He became acquainted there through his Tibetan friend with an ambassador who fervently tried to persuade him to come to Tibet to treat a higher lama. Dr. Jarl followed the ambassador and after a long journey by plane and yak caravan, they arrived at a monastery where the old lama and also his friend now lived, who now had a higher position. Dr. Jarl stayed there for some time and through his friendship with the Tibetans he learned many things that other foreigners had no chance to hear about or notice.

One day his friend took him to a place near the monastery and showed him a meadow that ran diagonally upwards and was surrounded by high rocky peaks in the northwest. On one of the cliffs, at a height of about 250 m, there was a big hole that looked like the entrance to a grotto. In front of this hole was a platform on which the monks had built a stone wall. The only access to this platform was only possible from the top of the rocks and the monks usually lowered themselves down with the help of ropes. 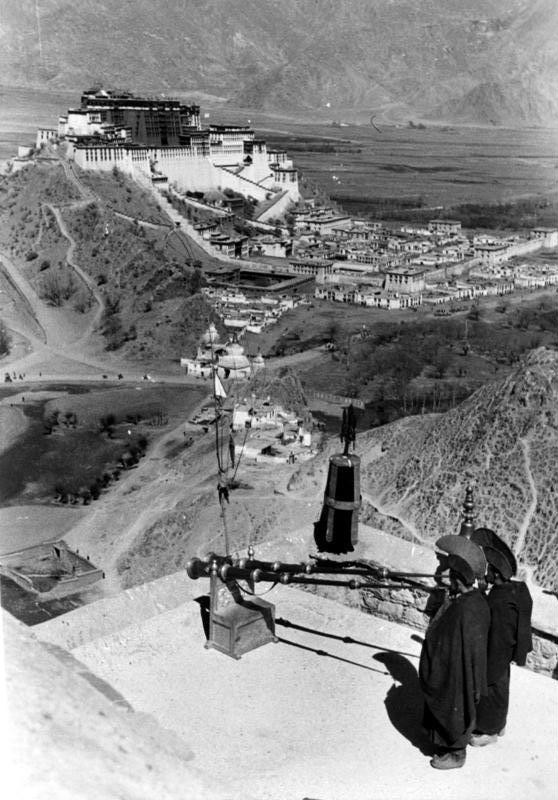 In the middle of the meadow, about 250 m below the rock face, was a polished piece of rock with a bowl-shaped depression in the middle. The bowl had a diameter of one meter and a depth of 15 centimeters. The block was one meter wide and 1.5 meters long. 19 musical instruments were placed in position in an arc of 90 degrees and at a distance of 63 metres from the rock bowl. The distance and radius were measured accurately. The musical instruments consisted of 13 drums and 6 trumpets (ragdons). Eight drums had a diameter of one meter and a length of one and a half meters. Four drums had an average size with a diameter of 0.7 m and a length of one meter. The only small drum had a diameter of 0.2 m and a length of 0.3 m. All wind instruments (like trumpets) had the same size. They were 3.12 m long with an opening of 0.3 m. The large drums and all trumpets were slightly raised and fixed on supports facing the polished stone. The large drums were made of 1 mm thick sheet iron and had a weight of 150 kg. They were built from five parts together. All the drums were open on one side; the other side had a metal base, on which the monks beat with large leather sticks. Behind each instrument was a row of monks. 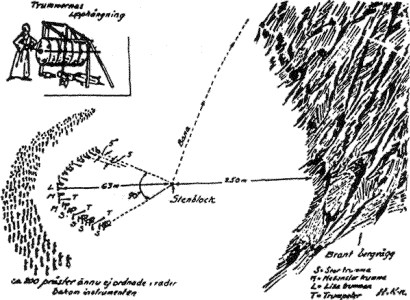 When the stone was in position, the monk behind the snare drum gave a signal so that the concert could begin. The snare drum had a very cutting sound and could also be heard from the other instruments, which were already making a terrible noise. All monks sang a prayer, slowly increasing the tempo of this incredible noise. During the first four minutes nothing happened; then, as the speed of the drumming and the noise increased, the big stone block began to move and rock and suddenly it rose into the air with increasing speed towards the platform in front of the cave opening at 250m. After three minutes of ascent it landed on the platform.
In the meantime the monks brought new blocks to the meadow and with this method they levitated 5 to 6 blocks per hour on a parabolic trajectory of about 500 meters length and 250 meters height. Sometimes a rock broke and the monks cleared away the remains. An amazing task. 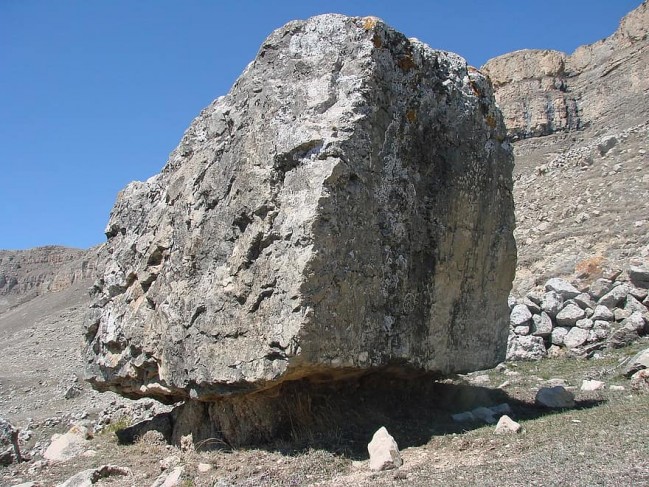 Dr. Jarl apparently knew about the method of levitation of the stones beforehand. Tibetan experts like Linaver, Spaldung and Huc had talked about it, but had never seen it themselves. So Dr. Jarl was the first stranger who got the chance to see this strange spectacle. Because he initially thought that he had been the victim of a mass psychosis, he made two films of this event. The films showed what he personally witnessed. The English company for which Dr. Jarl worked confiscated these two films and declared that they were classified. However, they were only released in 1990. This action is quite difficult to explain or comprehend." Here ends the report.

What exactly caused the rocks to antigravitate? The singing, the sounds of the instruments, or all of it? Or perhaps the singing was dispensable? In any case, it can be assumed that the 63 meter distance as well as the geometry of the alignment is responsible for this and that the Tibetan monks knew the laws and secrets of geodesy and the leyline structure of the earth (also called "grid"), perhaps better than we (should) know today.

As is so often the case, it is practically impossible to get hold of original source material. Even the claim that the film material has been released is not confirmed by my research. So there is always the possibility that the story was invented. However, it is also conceivable that the Royal Society swept it under the carpet so as not to raise uncomfortable questions. Nor have I been able to verify the identity of this Dr Jarl.